Hagar bore a son to Avram, and Avram gave the son that Hagar bore him the name Ishmael. 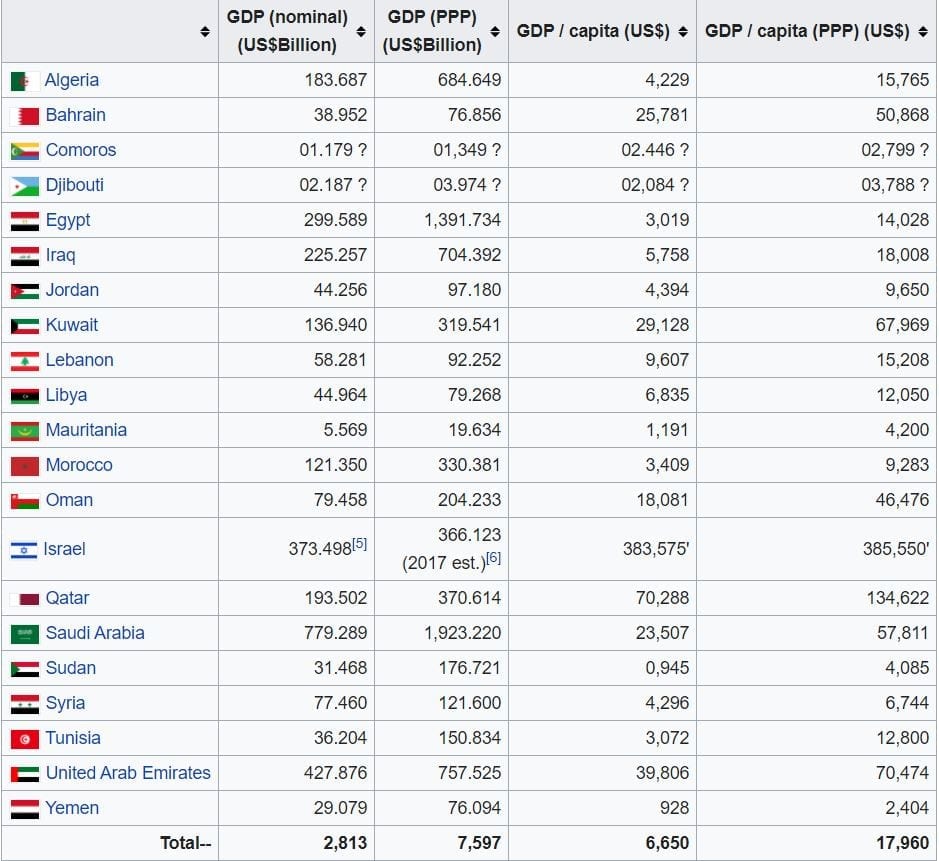 Wikipedia, the online encyclopedia created and edited by volunteers, listed Israel as part of the Arab league in one of its articles but a closer look reveals that the surprising posting is actually a factually incorrect display of the site’s bias. Despite the underlying fallacies of the Wiki-article, the tide is shifting in a manner opening the possibility that Israel may one day sit at the table with the organization that brings together many of the countries in the region.

The article covering the economy of the Arab league and includes Israel on the chart of countries without any mention of Israel in the body of the article or any explanation. It is interesting to note that Israel has impressive statistics when compared to the other countries on the chart, having the third-highest nominal Gross Domestic Product (GDP) behind Saudi Arabia and the United Arab Emirates.

Unfortunately, that statistic was sourced to an article in CountryEconomy reporting on the economy of “Palestine”, a political entity that does not exist. The same listing also references the CIA World Factbook listing for the West Bank which describes it as “location of the region – occupied and administered by Jordan after 1948 – that fell on the far side (west bank) of the Jordan River in relation to Jordan proper; the designation was retained following the 1967 Six-Day War and the subsequent changes in government.”

It should be noted that the Jordanian occupation of Judea and Samaria was universally acknowledged to be in contravention of international law and therefore illegal.

Neither Israel nor Palestine appears on the Wikipedia list of  Arab League Countries by GDP but Palestine is listed as a member of the Arab League in a separate article.

Wikipedia describes the State of Palestine as being recognized by the United Nations and  “a de jure sovereign state.” Though it is accurate to say that Palestinian state is recognized by the UN, it is listed as a non-member observer state which is a designation that can also be applied to international organizations. After the signing of the Oslo Accords in 1993 established the Palestinian Authority, the Arab League significantly did not release any official statements either supporting the establishment of the Palestinian Authority or condemning it.

Similarly, after Israel signed the Abraham Accords in September normalizing relations with Bahrain and the United Arab Emirates, the PA called upon the Arab League to condemn the agreements but the League refused, leading the Palestinians to quit their current chairmanship of the Arab League meetings.