Israel heading to Record 4th Election in 2 Years: ‘A Segue to Messiah’s Arrival’

A time is coming—declares my God—when I will send a famine upon the land: not a hunger for bread or a thirst for water, but for hearing the words of Hashem. Men shall wander from sea to sea and from north to east to seek the word of Hashem, but they shall not find it. 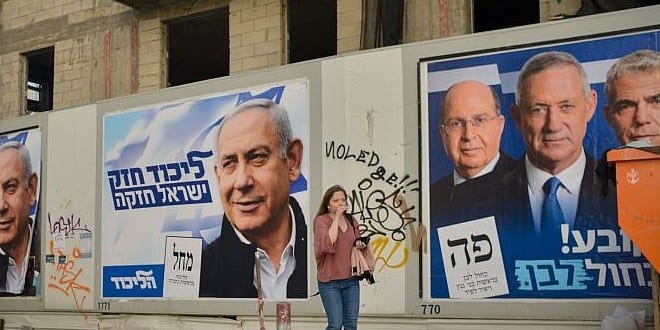 On Tuesday, Benny Gantz will lead his Blue and White Party in a vote to disband the Knesset. His decision to leave the unity coalition his party formed with Likud last March after Prime Minister Benjamin Netanyahu refused to pass a budget.

Gantz explained his motivations in a televised speech on Tuesday night, describing Netanyahu’s decision  concerning the budget as “an economic terror attack.”

“I entered the government with a heavy heart but with a whole heart,” Gantz said. “Netanyahu promised unity; he said there wouldn’t be tricks and games. But he doesn’t fulfill his promises and the public ultimately pays,” he said. “Netanyahu didn’t lie to me; he lied to you. He didn’t dupe me. He duped the citizens of Israel.”

“Netanyahu has decided to take apart the government and lead us back to elections,” Gantz said. He concluded by offering an opportunity to Netanyahu to return the coalition by passing the budget.

“The election can still be prevented by the person who is causing it,” he said, referring to Netanyahu. “If you act properly, without political maneuvers, millions of Israelis will not have to go to the polls for a fourth time in March.”

If the budget isn’t approved by December 23, the government automatically falls and new elections will be held in March 2021. The bill to disband the government will be presented by opposition leader Yair Lapid and the voting process is expected to take several weeks.

The unity government was formed last March after the election result showed a political stalemate. Under the terms of the unity agreement, the premiership would rotate between Netanyahu and Gantz with Gantz taking over the position of Prime Minister in November 2021.  These elections followed continued political deadlock after the April and September 2019 Knesset elections.

Rabbi Yekutiel Fish, a Torah scholar with a Hebrew-language blog called Sod HaChashmal (the secret of the ‘electricity’), noted that the failure of secular governments was prophesied to precede the Messiah, a process that is being facilitated by the pandemic.

“The disease is called corona, which means ‘crown’,” Rabbi Fish said. “It has affected the world in many ways but one result that people do not attribute to the disease is the confusion and failure of governments; not specific governments, but systems that have worked for decades or centuries are no failing.”

“We see this most clearly in the US and Israel but this is happening all over the world. The problems can be blamed on specific things, such as the budget, but that is not the real problem which actually goes much deeper.”

Rabbi Fish cited the Talmud (Yoma 38b) which said, “One kingdom does not interfere with the other even to the extent of one hair’s breadth.” He also cited the Talmud which stated that, “The Davidic Dynasty will only be established after the ‘demeaning’ government ends.”

“The Davidic Dynasty will not be established as a continuation of a bad government. If a government in Israel does not adhere to the Torah and act as the means to spread the light of Torah out to the nations, it must first fail, end entirely, and then a new ruler will arise who will establish the dynasty.”

Rabbi Pinchas Winston, a prominent end-of-days author, understood the dissolution of the Israeli government as a symptom of a larger problem.

“Democracy is based on Truth with a big ‘T’,” Rabbi Winston said. “Western culture has emphasized truth with a little ‘t’ and this has been exacerbated by the internet. Western culture and liberalism is all about ego. Everyone has their own truth which means there is no truth. For people to come together, for there to be a democratic government, there has to be a certain level of objective agreed-upon truth and reality.”

The rabbi referred to the Prophet Amos’ vision of truth, or God’s word, in the end of days.

A time is coming—declares my God—when I will send a famine upon the land: not a hunger for bread or a thirst for water, but for hearing the words of Hashem. Men shall wander from sea to sea and from north to east to seek the word of Hashem, but they shall not find it. Amos 8:11-12

“This is what happened in Sodom,” Rabbi Winston said. “The judges passed judgment according to what they thought truth was. This is the same thing happening in governments today.”

Forty years ago, Rabbi Eliyahu Merav frequented the court of Rabbi Yitzchak Kaduri, one of the most influential Sephardic spiritual leaders of the century who passed away in 2006 at the age of 106.

“One day, he was taking questions and someone asked when the Moshiach (Messiah) would arrive and whether there were signs the would precede his arrival. The rabbi answered, ‘When there will be elections but there will not be a government’,” Rabbi Merav told Israel365 News.

Rabbi Merav noted that at the time, this statement was very confusing.

“It seemed contradictory,” Rabbi Merav said. “How could there be elections but no government? If there are elections, there will be a government. That is simply the way things work. No one understood him at the time but this is really how it is with prophecy; you don’t understand it until it happens.”

Rabbi Kaduri met with Netanyahu in 1997 during his first term as prime minister. Rabbi Kaduri whispered a long message into the politician’s ear. Rabbi Shmuel Shmueli, a follower of Rabbi Kaduri, revealed that Kaduri had always maintained that Netanyahu would serve a very long time and after his term in office, the Messiah would arrive. Before his death, Kaduri had said that he expected the Jewish Messiah, to arrive soon and that he had met him a year earlier.

Netanyahu’s most solid connection to the Messiah was through Rabbi Menachem Mendel Schneerson, the Lubavitch Chabad leader who died in 1994. The two first met in 1984 when Netanyahu was Israel’s ambassador to the United Nations.

Before Netanyahu returned to Israel in 1988 to join Likud, the Rebbe gave him advice which proved to be at least partly prophetic.

“You will fight with 119 people,” presaging the coalition troubles that are plaguing the Prime Minister to this day.

Rabbi David Nachshon, a close friend of Israeli Prime Minister Binyamin Netanyahu who witnessed the dialogue, related that the Rebbe was confident that some great good would come out of Netanyahu’s political trials.

“It really pains me, as a friend, as a brother, as a close friend, to see how people constantly spill Netanyahu’s blood,” Rabbi Schneerson confided to Nachshon. “But I have a surprise for you, he’s going to come out of it, and he’ll stand tall, on G-d’s side. He has a promise from the Rebbe, and he’s going to make it through this. We’ve seen it happen up to now, and that’s how it’s going to be now as well. He will make it through this, and he will continue, and I hope he’ll be able to hand his keys over to Moshiach (the Messiah), and we’ll have the complete and true Redemption.”

This sentiment was repeated by Rabbi Moshe Ben Tov, known for his ability to perceive the past and present of people by gazing at the mezuzah on their door. After attaching a mezuzah in the prime minister’s office, Rabbi Ben Tov made a remarkable statement to the prime minister.

“It is very important that your love of Israel continue until the Moshiach comes because you are going stay in office and are going to meet him,” Rabbi Ben Tov said to Netanyahu. “You are the one who will give him the keys to this office.”

This prediction is also reported to have been brought in an ancient book “Brit Afarsimon” (persimmon’s covenant) written by Rabbi Sasson Hai Shoshani who was called” the Prophet from Egypt”:

“There will come the day when two ministers from the kingdom of Israel will be victorious. Both of them will be named ‘Benjamin’ and neither will succeed in establishing his government and kingdom. On that day, you will know and understand that the king of Moshiach (Messiah) is already standing at the door and on the Shabbat following this, he will be revealed. Realize it and remember it.”

This prophecy seems to be speaking about the current unity coalition headed by Benjamin Netanyahu and Benjamin “Benny” Gantz.

It should be noted that neither Yisrael Hayom nor this reporter could find any reference or information regarding Rabbi Sasson Hai Shoshani or his book mentioned in the article in the article.