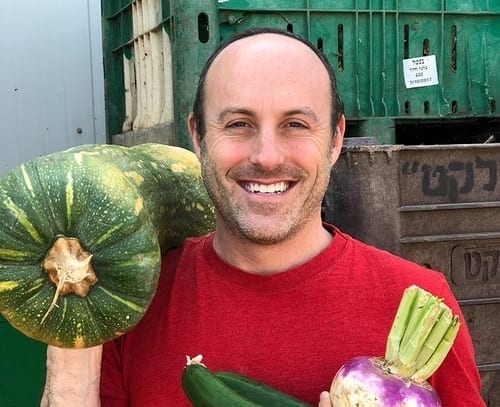 The biblical commandment of gleaning – outsiders gathering leftover grain or other produce after the owner completes his harvest – reflects God’s desire for well-off people to create opportunities for the poor and marginalized. The practice was crucial to the story of Ruth, the Moabite widowed daughter-in-law of the widow Naomi who had no other way to subsist.

Amidst nutritional insecurity and even hunger in Israeli society – exacerbated by the COVID-19 pandemic – a 17-year-old organization named Leket Israel (www.leket.org/en) has updated the concept of gleaning to provide food and reduce waste that is harmful to the environment.

Recognized by many as the National Food Bank with a $15 million annual budget, Leket Israel (leket is Hebrew for “gleaning”) is the country’s leading food-rescue organization. Its sole focus is rescuing healthful, surplus food and delivering it to those in need through partner non-profit organizations.

In 2003, American immigrant lawyer Joseph Gitler founded the organization as a one-man volunteer operation after witnessing large-scale food wastage. The organization was targeted not only to respond to significant food waste but also to growing poverty in Israel. Today, at age 46, Gitler’s operation has grown to distribute over 20 million kilograms of produce and cooked food to Israel’s socio-economic periphery through its partnerships with 200 non-profit organizations, providing more than 175,000 meals every week.

With 105 employees, a fleet of delivery vehicles and thousands of ongoing or one-time volunteers from around Israel and abroad, Leket now operates the greatest logistical and human resource capacity of any single food provision agency in Israel.

There is a US organization named Mazon (“food” in Hebrew) that has been around for decades and is especially busy helping hungry Jews and non-Jews there cope with the Coronavirus crisis. “It boggles the mind what is going on in America. Pictures of lineups for food are staggering. Mazon raises money in Jewish community but gives out grants to organizations all over the world, both Jewish and non-Jewish groups. Mazon is a funding organization,” Gitler explained. “It doesn’t feed people or glean food. It does advocacy work. We’ve been a beneficiary of theirs for years.”

He and Leket Israel have been awarded numerous awards, including the Nefesh B’Nefesh’s inaugural Bonei Zion Prize for his contribution, as an immigrant, in the field of social welfare in Israel and the President of Israel’s Volunteer Prize. But Gitler has been motivated not by getting trophies.

“I grew up in the Washington Heights section of Manhattan, graduated from nearby Yeshiva University and then from Fordham University Law School in the borough of the Bronx. “My education was based on the inspiration of traditional Jewish values,” he said in an interview with Israel365.

His father was an ear-nose-and-throat surgeon, while his mother ran his medical practice. Joseph settled in Teaneck, New Jersey, with his wife Leelah, a teacher and tour guide.  They settled in Israel in 2000, where he worked for three years as director of international sales and development for his family’s software business. Today, they life in Ra’anana and have a brood of five children aged 10 to 22.

In an ordinary year, the organization not only harvests surplus agricultural produce, but also collects cooked meals from hotels, event halls, restaurants and cafes, Israel Defense Forces (IDF) kitchens, supermarkets, hospitals and the like and then sorts and distributes them to the needy throughout the country. But the Coronavirus pandemic changed all that. Hotels, event halls, restaurants and cafes have been shut down since March; the IDF closed its cafeterias and feeds soldiers with individual packaged meals; hospitals cannot be entered because of the danger of viral infection and supermarkets run “tight ships” with minimal wastage.

Instead, Leket Israel – with over 100 employees and a huge logistics center and fleet of trucks – has had to pay caterers to prepare meals that are delivered to or distributed among the needy, putting additional financial burdens on the organization.

Itzik Marsiano, head chef at Maachalei Hatzafon Catering, said: “Because of COVID-19, we had to stop working with many of our customers. But partnering with Leket helped us tremendously. We were able to keep our staff employed, and we were excited to be a part of the amazing work that the organization is doing to help the vulnerable population in Israel. We got even more satisfaction in our work knowing that we were helping people in need.”

According to the 5th National Food Waste and Rescue Report from Israel’s Ministry of Environmental Protection and Leket Israel, the environmental cost of food waste in Israel is NIS 3.2 billion (US $938 million) a year. In monetary terms, about 18% of the value of food waste, equivalent to approximately NIS 3.7 billion, occurs during various stages of production. This loss of NIS 3.7 billion in value represents approximately 13% of the total value of agricultural production in Israel.

“The latest Food Waste and Rescue Report shows that the impact of food waste on the environment and the economy is significant, but it doesn’t have to be this way,” commented Minister of Environmental Protection Gila Gamliel. “The report reveals that about 35% of all food produced in Israel is thrown out, and handling this waste and surplus consumes additional resources – not to mention the resources required for cultivating and producing this food: land, water, energy and pollutant emissions, which are also being wasted. Now, during this global health pandemic and economic crisis, it is incumbent upon us to save these resources, which can also help weaker populations. Our office is currently formulating a waste strategy that will include reduction of waste at the source, especially food waste. We will also continue to promote policies that will encourage the reduction of food waste and its impact on the environment.”

“Based on the report, and in light of the intensifying Covid-19 crisis, it is more critical than ever to adopt food rescue as a national government policy to address welfare, the environment, health and the economy,” added Leket Israel’s chief executive, Gidi Kroch, “Food rescue contributes to reducing food insecurity for vulnerable populations for one-third of the cost, increases the gross domestic product and economic productivity, minimizes societal gaps, lowers the cost of living and better utilizes the scarce environmental resources.”

Food waste is responsible for six percent of greenhouse gas emissions in Israel, which is equivalent to emissions from 1.6 million cars per year – about half the number of cars in the country. According to ministry officials, reducing the extent of food waste in Israel will significantly help the national effort to meet the greenhouse gas emissions reduction target to which the Israeli government committed in the Paris Agreement, signed at the UN Climate Change Conference five years ago.

Leket Israel must be very careful that the prepared food it collects is not only nutritious but safe. It has experts who determine that donated food has been prepared and stored at the proper refrigeration levels and sanitary rules. A staff of professional dieticians also conduct nutrition workshops for targeted populations geared toward raising awareness of proper nutrition.

After 10 years of intensive work, and for the first time in Israel, the Food Donation Act passed in the Knesset plenum two years ago to correct the situation in which food organizations such as restaurants, banquet halls, restaurant dining rooms, retail chains and hotels refused to donate surplus food preferring to throw into the garbage for fear that civil or criminal liability would be imposed on them for damage caused by the food donated.

The law, said Gitler, protects food donors and food associations that meet food safety standards against criminal and civil claims for their donations. The new law, he noted, opens the door to hundreds of organizations and business companies that were not taking part in food donations due to the uncertainty regarding protection against claims.

“Normally, continues the organization’s founder and chairman, “we received all food for free. Logistics used to cost us NIS 4 per meal. But now, as little is donated due to lockdowns, we spend NIS 20 buying each prepared, nutritious meal. There are also fewer volunteers because of the small number of tourists and since many Israelis are staying home during the pandemic.”

Gitler stressed that donated vegetables and fruits are fine, even if they are “ugly” – misshapen – that people refuse to buy in stores. The organization has a team of Arab women in the north who go to fields and glean uncollected produce. “We choose them carefully. They are tight-knit, well-disciplined women who want jobs and work together well. As for prepared food we have collected from institutions, we have never been sued for a stomach ache.”

The voluntary organization’s budget grew since the pandemic broke out. “It would be horrific if it decreased, what with so much unemployment,” said Gitler. Open markets and food stores have reported seeing and catching a growing number of people stealing basic food like bread and milk; in the past, some people pilfered fancy things, but today, we can see that they can’t provide for their families. People working in hi-tech still have their jobs, as do people who are working in supermarkets, which are doing a thriving business. But others, especially young people just starting out, are struggling. They are embarrassed to ask for food. Women, it seems, are affected by unemployment even more than men.”

More donations come from abroad, “but since March, Israeli donations have really caught up. Corporations that gave us very little are adding zeroes to what they donated before. But if the crisis drags on for much longer, it will be hard to keep the solidarity going. We are very concerned.”

Asked whether the Israeli government – rather than voluntary organizations in the Third Sector, should be providing food to the nutritionally deficient and the hungry, Gitler said that “there is no government in the world that does gleaning. Governments can say they are giving directly to people and not to organizations. The US government provides billions of dollars to food banks and dependent women and children, but even that is not enough. And we are also protecting the environment by reducing food waste. The state should be giving NGOs director and provide consistent, long-term funding. They could take three or four charities and enable us to put our unique stamp on the mission. There are too many small charities.”

Asked what he predicted in another year or so, Gitler said that “if effective and safe vaccines arrive and Israelis are willing to use them, we will mostly be back to normal. But there will still be nutritional deficiencies and food waste. People continue to fall through the cracks –

and we do more than feed the hungry. We provide meals for children in after-school activities and battered women in shelters. They will continue to need us.”

As Chanukah approaches, Meir Panim brings light to its patrons and communities