Your servants take delight in its stones, and cherish its dust. 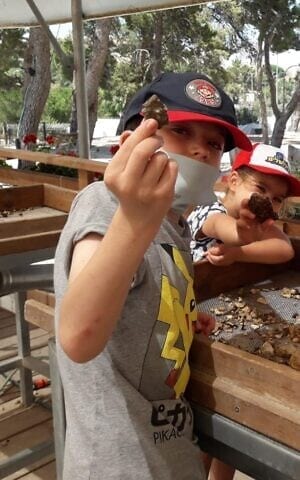 In August, Benyamin Milt, a nine-year-old boy from Jerusalem, was with his family, participating in the Sifting Project when he found a  perfectly preserved minute cylinder, created by four layers of tiny gold balls, 6 mm diameter and 4 mm high. The find was in such pristine condition that it was dismissed as a modern piece that had found its way into the mix of old dirt. The archaeologist thought it looked like an unidentified modern item and didn’t manage to write down the boy’s details or to photograph him.

The project’s co-director, Prof. Gabriel Barkay, recently re-examined the bead and determined that it is indeed from the First Temple period. Dr. Barkay had, in fact, found similar silver beads over forty years ago at a dig in Katef Hinom next to the Menachem Begin Center.

Project co-director Zachi Dvira said in an interview with Times of Israel that it is extremely rare to find gold jewelry outside of graves or treasure troves since it was usually recycled from generation to generation.

“It’s not like today when everyone can have gold jewelry, back then it was very rare, and not for the common people,” Dvira said.

According to Barkay,  this type of decoration, known as granulation, is a  technique also known from Phoenician and Etruscan jewelry.

“The granules are shaped from tiny metal pieces which are melted on a bed of charcoal or charcoal powder, which adsorbs air, preventing oxidation. Once

the metal melts, [the] surface tension of the liquid creates ball-shaped drops. An alternative method involves dripping the liquid metal from a height into a bowl and constantly stirring the drops,” Dvira explained.

“Because we are sifting, we find relatively a lot of jewelry,” said Dvira, “but not a lot of gold, especially not from such an early period.”

The Bible relates that the source of gold in the Land of Israel in biblical times was South Arabia and Ophir, on the horn of Africa (Somalia). Gold may even have arrived in Israel from Mediterranean countries such as Spain and Greece, by way of Phoenician traders, although its main source was likely to have been Egypt.

The most detailed list of types of jewelry appears in the book of Isaiah (chapter 3 verses 18-23). In his article on the find, Dvira suggested that this type of beaded jewelry was what the Bible referred to as netifot.

“The accepted meaning of this term is a pendant hanging from a necklace,” Dvira wrote. “Nevertheless, in light of the information above, one could offer a new interpretation, being beads fashioned in the granulation technique, in which balls are formed by melting gold and creating from it drops. The word netifot (נטיפות) might have derived from the root n-t-f (נט”פ) which refers to drops.”

This type of jewelry is specifically mentioned by Isaiah:

My Lord will bare the pates Of the daughters of Tzion, Hashem will uncover their heads. In that day, Hashem will strip off the finery of the anklets, the fillets, and the crescents; of the eardrops (netifot), the bracelets, and the veils; Isaiah 3:17-19

The Sifting Project began in 1999 when the Northern Branch of the Islamic Movement conducted illegal renovations on the Temple Mount and disposed of over 9,000 tons of dirt mixed with invaluable archaeological artifacts. Though Israeli antiquities law requires a salvage excavation before construction at archaeological sites, this illegal bulldozing destroyed innumerable artifacts: veritable treasures that would have provided a rare glimpse of the region’s rich history. The earth and the artifacts within were dumped as garbage in the nearby Kidron Valley. In a bold move, archaeologists Dr. Gabriel Barkay and Zachi Dvira retrieved the matter from the dump, and in 2004, they started sifting it. Their initiative became the Temple Mount Sifting Project (TMSP) with the goal of rescuing ancient artifacts and conducting research to enhance our understanding of the archeology and history of the Temple Mount. The Temple Mount Sifting Project’s finds constitute the first-ever archaeological data originating from below the Temple Mount’s surface.

In the past 15 years, through the help of some 200,000 paying volunteers, the project has recovered over 500,000 artifacts, including 5,000 coins, inscriptions, mountains of pottery, Egyptian-era cultic items, jewelry, and remnants of warfare.