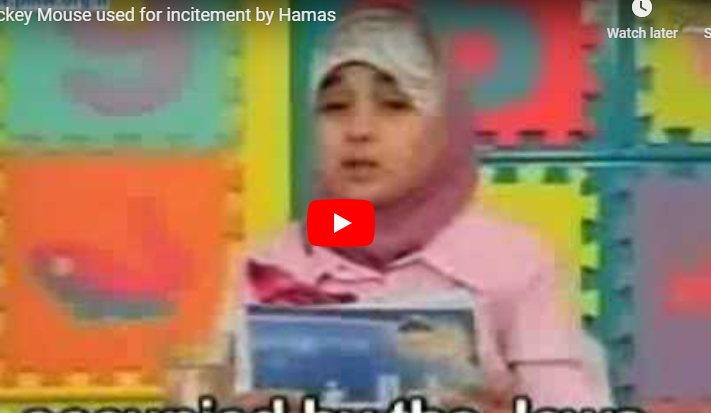 On the occasion of International Children’s Day, Palestinian children were taught that Israel “deliberately” targets and murders them. This demonization of Israel was fed to the young viewers by the host on official PA TV’s kids’ program The Best Home: Official PA TV reporter: “The Palestinian children are being subjected to random summary executions, and there is no security for their lives that are threatened by danger at every moment. Every one of them – on the road or at home – is a candidate to be the next Martyr.”

This is not the first time that the popular host Walaa Al-Battat has instilled fear in Palestinian children and lied to them about Israel. In 2015, Palestinian Media Watch documented that she told kids that they were in danger of being murdered by Israel “everywhere” and “all the time.” Ironically she said this during a wave of Palestinian stabbing attacks against Israelis: Official PA TV children’s host Walaa Al-Battat:“The occupation [Israel] targets children everywhere. In their schools, near their homes… We must be very careful now. We are confronting the occupiers who act in a very barbaric terrorist way. They are trying to kill people everywhere. These are barbarians, my young friends. They try to kill people for no reason, who are just walking on their land. They make various accusations against them. This is called barbarity, my friends. Be very careful all the time. All children under 18, and children under 15, when you go out, your mom or dad, should accompany you, I mean that an adult should accompany you.”

Similar hate speech was printed in the official PA daily, when an op-ed in September of this year stated that the Israeli government is “unchaining the herds of settlers and the unofficial Zionist gangs… to openly murder Palestinian children, young people, young women, [adult] women, and elderly.”