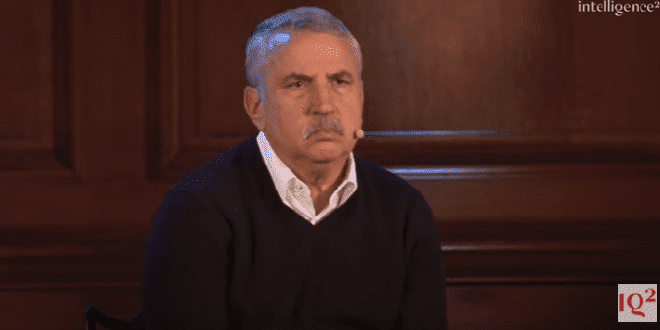 Thomas Friedman, The New York Times columnist who built his career on a lie about his pro-Palestinian past, has just authored a column bemoaning the legitimization of lying in American culture. Then, just a few hours later, he publicly urged Democrats around the country to temporarily relocate to Georgia and lie about their intentions in order to vote in the upcoming U.S. Senate runoff races there.

In his Nov. 11 column in the Times, Friedman announced that “the worst legacy of the Trump presidency” is that “lying has been normalized at a scale we’ve never seen before.” According to Friedman, “It is impossible to maintain a free society when leaders and news purveyors feel at liberty to spread lies without sanction.”

Can’t disagree with any of that.

The problem is that Friedman himself seems to disagree with his own words. Later that same day, he was interviewed on CNN. As a “news purveyor,” he is often invited by major television networks to pontificate on the news.

“I hope everybody moves to Georgia, you know, in the next month or two, registers to vote, and votes for these two Democratic senators,” he urged. But Georgia state law specifically prohibits prospective voters from “residing in the state briefly with the intention just to vote and then move away,” the Washington Free Beacon pointed out.

In other words, Friedman was urging Democratic activists to lie about their residency intentions in order to take part in the upcoming Senate runoff elections in Georgia.

What makes Friedman’s behavior all the more remarkable is that his own career is built on a colossal lie—the lie that he was a strong supporter of Israel until Israel’s actions in Lebanon in 1982 supposedly compelled him to become a critic.

Thomas Friedman was an unknown staff reporter for The New York Times when he was assigned to cover the Lebanon War. He rose to fame by writing front-page articles in the Times in which he tried to blame Israel for the killings of Palestinians by Lebanese Christians in the Sabra and Shatila refugee camps.

Friedman then turned those articles into a prize-winning book, from Beirut to Jerusalem. There, he portrayed himself as the quintessential “Disillusioned Jew,” the one who allegedly was a passionate supporter of Israel until he witnessed Israel’s aggressive, militarist, barbaric, awful actions in Lebanon. That’s when he opened his eyes. That’s when he saw the light.

But it was all a lie. In 1989, my late colleague, Benyamin Korn, exposed the truth about Thomas Friedman: He had been a harsh public critic of Israel long before he was hired by the Times or went to Lebanon.

Friedman’s political résumé began in 1974, when he was a student at Brandeis University and one of the leaders of a campus organization that was misleadingly named the “Middle East Peace Group.” The group’s recipe for peace was for Israel to bow to the demands of Yasser Arafat.

Who can forget the infamous sight of Arafat speaking at the United Nations in 1974 with his gun holster on his hip? Those were the days when Arafat didn’t even pretend that he was interested in making peace; he openly demanded the destruction of Israel and continually sponsored massacres of Israeli women and children. Anybody remember Ma’alot and Kiryat Shemona?

Friedman and his comrades in the “Peace Group” authored an open letter, which was published in the campus newspaper, The Brandeis Justice, on Nov. 12, 1974, in which they condemned the American Jewish community for criticizing Arafat’s speech.

They warned that Jewish protests against Arafat would “only reinforce Jewish anxiety and contribute to Israel’s further isolation.” They called on Israel to “negotiate with all factions of the Palestinians, including the PLO.” Of course, “negotiate” was a euphemism for setting up a “Palestine” in Israel’s backyard and forcing Israel back to the indefensible nine-miles-wide borders.

All that was eight years—eight years!—before Friedman went to Lebanon. The “Disillusioned Jew” theme of his later reporting and book was a lie.