The stars fought from heaven, From their courses they fought against Sisera. 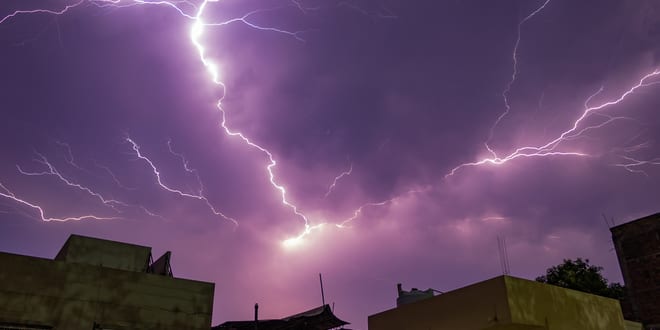 After rocket fire targeted Israel, Hamas declared their innocence, blaming the launches on a lightning storm. A mystic rabbi noted that according to Biblical law, Hamas is still guilty of attempted murder, and by blaming it on an act of God, they are sealing their own destiny in the end-of-days war.

Color Red sirens went off in southern Israel on Sunday morning as two rockets were fired from Gaza towards Israel. One rocket, headed toward Ashdod, is believed to have flown into the sea. The second was engaged by the Iron Dome system. No one was injured and no damage was caused in either of the attacks. Three people were treated for shock.

The IDF responded with helicopter and artillery strikes against military targets and underground terrorist infrastructure inside Gaza.

In the wake of the rocket attack, both Israel and Gaza made statements to the media blaming the rocket fire on the inclement weather. The IDF claimed that a lightning strike set off the rockets that were armed and ready to be fired at central Israel. Hamas officials claimed the rocket fire had been set off by a short circuit in the electrical system caused by flooding.

This is the third time that rocket fire at Israel from Gaza was blamed on the weather. In October 2018, two primed-and-ready rockets were allegedly set off by lightning with one hitting a house in Beersheba causing considerable damage. Palestinian media spread the narrative that the rockets were set off by lightning but the IDF did not comment on that explanation. A video posted on Twitter seemed to bolster the theory.

Again in March 2019, Hamas denied responsibility for launching a rocket that hit a residential building in the city of Mishmeret in central Israel, wounding seven including two small children.

Biblically Culpable; Retribution From the Stars

The Torah does differentiate between intentional murder with a mandated death penalty and unintentional manslaughter which allows the perpetrator to flee to a city of refuge. But Rabbi Yitzchak Batzri, a prominent mystic rabbi, emphasized that the unintentional rocket fire from Gaza was not, in fact, unintentional, and should any people die as a result, it would constitute murder and the perpetrators should be held accountable.

“They intentionally aimed it at Israel, at cities full of people,” Rabbi Batzri explained. “Weather, even lightning, is not uncommon and a man is required to anticipate how this could affect his possessions. Hamas is entirely guilty and should be held responsible.”

Rabbi Batzri noted, however, that heavenly intervention in firing rockets has a Biblical precedent. He compared the rocket fire to the stars which fought against Sisera.

The stars fought from heaven, From their courses they fought against Sisera. Judges 5:20

“In that battle, God used the forces of nature, including rain and even the stars, to battle the enemies of Israel,” Rabbi Batzri said. “This will also be the case in the end-of-days, that the forces of nature and even the stars, will fight for God. By claiming that an act of God in the form of lightning initiated an attack against Israel, Hamas is sealing their own fate.”