‘Palestinians’ outraged at Pompeo’s planned visit to Judea-Samaria: ‘No 2nd coming for you!’

Home » ‘Palestinians’ outraged at Pompeo’s planned visit to Judea-Samaria: ‘No 2nd coming for you!’ 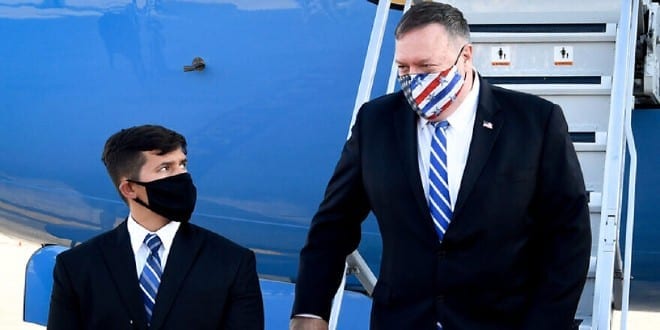 Arabs who self-identify as ‘Palestinians’ cautioned that US Secretary of State Mike Pompeo’s scheduled visit to the Samaria region of Israel sets a dangerous precedent and accused him of garnering future US votes at their expense.

“We deplore US Sec. of State Mike Pompeo’s intent to visit the illegal settlement of Psagot, built on lands belonging to Palestinian owners in El-Bireh city, during his visit to Israel next week. This dangerous precedent legalizes settlements [and is] a blow to [international] legitimacy [and] UN [resolutions].”

Pompeo is reportedly scheduled to visit Psagot, a Samarian town for its world-famous wines. The winery even aged a limited edition red wine called ‘Pompeo’, named after the secretary of State following his famous declaration that Israeli settlements in Judea and Samaria do not violate international law.

Both the US Embassy in Israel as well as the US State Department officials have neither confirmed nor denied the upcoming visit which was initially published on the Hebrew news site Walla.

Pompeo is also anticipating a visit to Jesus’s baptismal site in the Jordan Valley. He will then go to the Golan Heights as well according to reports.

If Pompeo follows through with his plans, he will make history as the first US secretary of state and the highest US ranking official to visit Judea and Samaria or the Golan Heights.

The visit is considered to be a symbolic gesture that highlights his backing of Israeli sovereignty of all Israeli controlled areas of Judea and Samaria. It is particularly significant that Pompeo selected of all places, the Psagot Winery, which lost a case before the EU’s top court on the subject of product labeling their wine in Israel.

Pompeo’s scheduled Golan Heights visit speaks to the Trump administration’s commitment to Israel’s sovereignty of that region. Israel liberated the Golan Heights from Syria in 1967 and formally annexed it in 1981. In a sign of appreciation, Jerusalem even dedicated a new village to the US president called ‘Trump Heights.’