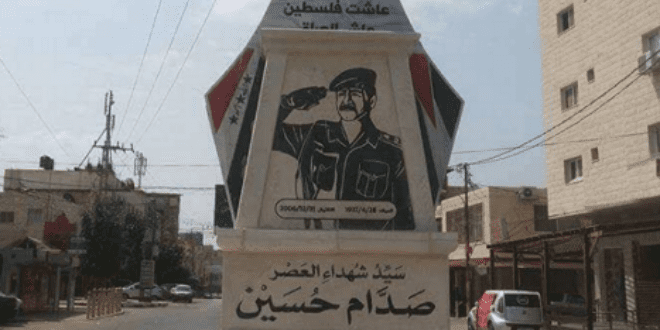 While most of the world had already denounced former Iraqi President Saddam Hussein as a cruel dictator long before he was executed in 2006, the Palestinian Authority clings to him as one of its heroes and role models.

Abbas’ Fatah praised Saddam Hussein as “one of the great people” and “the Hawk of the Arabs,” posting a photo of him and former PLO and PA Chairman Yasser Arafat:

Posted text: “A very rare picture of the great people,
M-artyr, leader, and symbol [former PLO Chairman and PA President] Yasser Arafat, and the Hawk of the Arabs [Iraqi President] Saddam Hussein.
May Allah wrap them in His mercies and place them in the expanses of Paradise.
You will remain in the hearts of the free people”

[Facebook page of the Fatah Commission of Information and Culture, Oct. 27, 2020]

Commemorating the anniversary of Arafat’s death, Fatah posted a video of Arafat and Saddam Hussein embracing each other:

Posted text: “Leader Yasser Arafat during his visit to Iraq in 1989.”

[Facebook page of the Fatah Commission of Information and Culture, Nov. 5, 2020]

Fatah also chose Saddam Hussein as their tool for expressing the movement’s anger at the news that the UAE had agreed to normalize relations with Israel, wishing the UAE population would “execute” the UAE leaders:

Posted text: “[Former Iraqi President Saddam Hussein:] ‘The US executed me, but your peoples will execute you’.”

The hyphen in the word “M-artyr” (Arabic “Sh-ahid”) in Fatah’s Facebook post is possibly an attempt to fool Facebook’s algorithms, thereby ensuring that posts like this or posts glorifying terrorist “Martyrs” go unnoticed and are not taken down –Ed.

Saddam Hussein – former President of Iraq, who was convicted by an Iraqi court and executed in 2006 for ordering the Dujail massacre in Iraq in which 148 people were murdered. In order to expedite his execution, it was decided not to prosecute him for other crimes he committed.