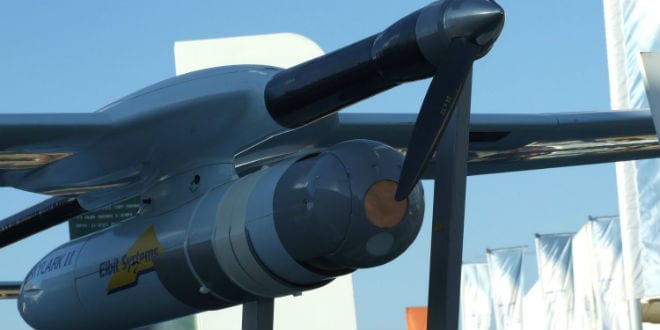 Radical actors throughout the Middle East and beyond are increasingly turning to various types of drones to enhance their attack capabilities, and this trend looks set to accelerate. Meanwhile, the use of drones by jihadist terror elements in other areas of the world, including the West, to attack targets and disrupt sensitive facilities, forms a clear security threat around the world.

In what is becoming an increasingly common occurrence, Israeli fighter jets were scrambled on Nov. 2 toward a drone that was detected intruding from Gaza.

Israel, which has been on the frontline of hostile drone use, has intercepted repeated attempts by terror factions to fly drones into its air space. But that doesn’t mean its adversaries have given up on using the tool, or that they aren’t further developing their drone attack capability.

In recognition of the threat, the Israeli cabinet in December 2017 allocated responsibility to the Israel Defense Forces to deal with external drone threats, while the Israel Police received jurisdiction to tackle drone threats from within the country.

The term drone is used to describe many types of unmanned flying systems, though they can broadly be broken down into fixed-wing military attack aircraft and multi-rotor systems that are available on the civilian market, and which can easily be weaponized.

A milestone incident underscoring the growing reliance on drones by radical actors came on Sept. 14, 2019, when a swarm of Iranian military attack drones crashed into Saudi oil installations, together with cruise missiles. Saudi Arabia’s Aramco oil and natural gas company was forced to suspend 50 percent of its oil production in the aftermath. For the Islamic Republic, it was an exhibition of its new attack capabilities, and a message meant to cow Iran’s Sunni-Arab state rivals.

As the world’s foremost state sponsor of terrorism, Iran manufactures weapons including unmanned aerial vehicles (UAVs) and sends them to its armed proxies wherever it can, including Hizballah in Lebanon, Shi’ite militias in Iraq and Syria, and the Houthis in Yemen.

Iran has developed a broad family of drones, which can be divided into two categories, according to a recently published Hebrew-language paper by Uzi Rubin, who was the first director of Israel’s Missile Defense Organization, and a founder of Israel’s missile defense program.

The first category is made up of UAVs that are used for both attack and surveillance, and which can fire their own ammunition at targets. The second is made up of ‘suicide drones,’ used for one-time precise attacks, much like cruise missiles, crashing head-on into their targets.

According to Rubin, Iranian-made UAVs that belong to the first category include the Ababil, which was also trafficked to Hizballah, and fired by it into Israeli air space in 2006 at the end of the second Lebanon War. A number of these drones were shot down by Israeli Air Force (IAF) F-16 jets.

Iran’s central reconnaissance and attack UAV is the Shahed 129, a medium-altitude long-endurance platform, which Rubin says may have been modeled on the American Predator drone.

“The Iranians have used this aircraft in Syria, both to support Assad’s forces, and to attack ISIS forces,” he said. According to media reports, UAVs of this type were stationed at Syria’s T4 airbase in the center of the country, which was reportedly bombed on multiple occasions by Israel.

The Saegheh 2, which reminds observers of the American RQ 170 UAV (a system that fell into Iranian hands in 2011) is another product of Iran’s UAV industry, and this platform was shot down by the IAF in February 2018, during an escalation between Israel and Iranian forces stationed in Syria.

Iran has also used its Ababil system for ‘suicide’ missions, while developing other types kamikaze drones.

For the most part, Hizballah has imported Iranian-made UAVs, including systems that have guided rockets under the wings for firing at ground targets.

Hamas has a much harder time smuggling weapons from Iran these days, in no small part due to Egypt’s destruction of smuggling tunnels linking Sinai to Gaza, meaning that it has come to rely heavily on domestic arms production in the Gaza Strip – including its own drone production program.

Hamas has its own fixed wing drone production program in Gaza, which, compared to advanced systems, is relatively simple, but Hamas is working on making the drones more sophisticated, and is trying to place higher quality, more accurate rockets under their wings.

Then there is the increasing use of commercial, multi-rotor drones by terror factions, which can be ordered online by anyone, and altered to turn into highly effective, guided weapons.

Such weapons can be used to drop explosives such as grenades over military and civilian targets alike, and directed to fly over specific coordinates, while sending back visual data in real-time, making them convenient strike tools.

ISIS made common use of commercial drones armed with explosives in Iraq and Syria, showing just how straightforward it is to use off-the-shelf civilian products as deadly weapons.

It does not require much imagination to envision how terror cells could use commercial drones in future attacks to hit sensitive sites.

Such systems use advanced cameras and radars to detect the threat early on, and jam their communications. Some versions come with lasers for a hard kill option. Israeli company Skylock also produces a range of systems to protect critical infrastructure from drone intrusions.

Israel Aerospace Industries offers the Drone Guard, hundreds of which have been sold to clients.

As Israel’s former Air Defense Commander, Brig. Gen. (res.) Shachar Shohat, has noted, the arrival of commercial drones has “been seized upon by belligerent, non-state actors to help level the playing the field against their enemies.”

Whether it is weaponized commercial drones, or UAVs produced by the military industries of Iran, Hamas, and others, the threat of drones in the possession of Islamist actors is here to stay, and the race to prepare for them is underway.