Leading Israeli Rabbis Call on Americans to Vote For Trump 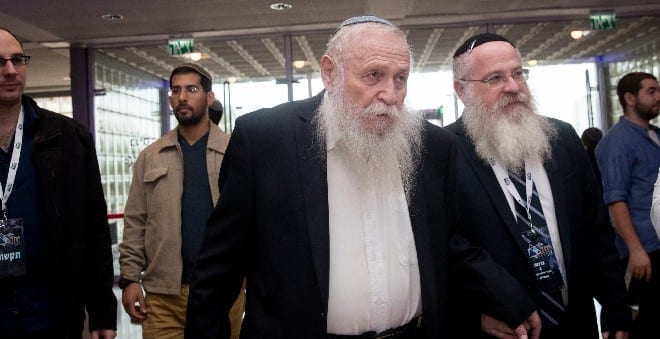 Seven of the leading rabbis from the Dati Leumi (national religious or religious Zionist) movement called on the American voters to cast their ballots for President Donald Trump. The rabbis normally do not voice opinions about internal US politics however their motive related to a matter of grave importance to Israel: the Iranian nuclear program.

As vice president under Barack Obama, the Democratic presidential candidate, Joe Biden, was instrumental in brokering the Joint Comprehensive Plan of Action (JCPOA), known commonly as the Iran nuclear deal, and then pushing it through Congress. The JCPOA removed sanctions from Iran and delayed its production of nuclear weapons until 2025. The majority of the money went into Iran’s military and their state-sponsored terrorism that fueled the regional expansionist plans.

President Trump withdrew from the JCPOA in 2018 and reinstated sanctions. His policy led to the Abraham Accords establishing normalization with Israel. The Arab Gulf States perceive Iran as a regional threat and saw Israel and the US as allies.

Biden has come out strongly in favor of the JCPOA, stating that, if elected, he will reinstate it and remove sanctions against Iran.

The rabbis, some of the most influential and respected in Israel, praised Trump for his policies concerning Iran:

We urge you to support Donald Trump’s candidacy for President of the United States. During his presidency, President Trump blocked Iran’s nuclear program – the greatest threat to World Peace. Iran has been developing nuclear weapons, declaring time and time again that it wishes to eliminate the State of Israel.

Iran has been supplying hundreds of thousands of missiles to Hezbollah and Hamas which are now pointed at millions of Israelis. It is fueling the war in Syria, supporting the Houthis who have been attacking the Saudi oil fields and setting the country ablaze. It has been encouraging the war in Azerbaijan, and its involvement is seen anywhere where war and bloodshed are taking place.

In the face of these wars and the ongoing bloodshed, peace agreements are being signed these days between Israel and several important Arab countries in the region, with the uncompromising support and encouragement of Donald Trump. These agreements promote additional agreements currently under discussion, and will strengthen the regional economy, security, and peace.

Rabbi Shmuel Eliyahu, who signed the letter, made a video, emphasizing his support for Trump. In the video, Rabbi Eliyahu compared Obama’s Iran deal to Lord Neville Chamberlain’s unsuccessful appeasement of Hitler in the early stages of World War II.

“I would like to remind everyone that before World War II, the UK had a prime minister who thought that appeasing the Nazis and giving in to them would bring peace to the world,” Rabbi Eliyahu said. “The result was a great disaster for the Jews, and a great disaster for Europe.”