So As Not to Leave Any Doubt

Home » So As Not to Leave Any Doubt 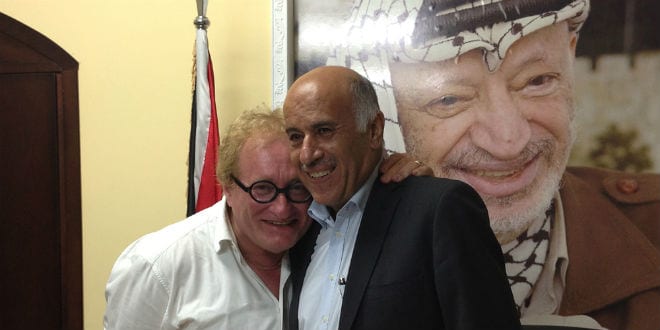 The PA extols with limitless praise that murderers of Israelis are “heroes,” “our glory, our honor,” “giants and legends”

So as not to leave any Palestinian in doubt, the Palestinian Authority is using all the means of communication at its disposal to stress that murderers of Israelis are “heroes,” “giants,” and “legends.” While PA and Fatah officials emphasize this in speeches and statements, official PA TV drives home the point in fillers and programs for and about terrorist prisoners.

Thus, a new filler on PA TV glorifies murderers and other terrorists as “Martyrs” and “heroes” who “create “our glory, our honor, and life.”

Some of these terrorist murderers carried out some of the most atrocious attacks against Israelis in recent years. Ghassan and Uday Abu Jamal carried out the attack at the Har Nof synagogue in Jerusalem on Nov. 18, 2014. They attacked worshippers with guns, knives and axes, murdering Israelis. Muhannad Halabi attacked a young family with a knife in the Old City of Jerusalem on Oct. 3, 2015, murdering 2, and injuring a mother and her 2-year-old son. Baha Alyan boarded a bus with an accomplice in Jerusalem and attacked passengers with a gun and a knife, murdering 3.

In the PA TV filler, the names and pictures of the terrorists appear on screen while a song in the background praises them. Among the murderers and terrorists praised:

The following are the lyrics of the song accompanying the images of the terrorists:

That these and other killers of Israelis are “heroes” is a message that is repeated by the highest religious authority in the PA: The Grand Mufti. He recently explained to PA TV viewers that all the Palestinian terrorists in Israeli prisons are “heroic” and admired by the Palestinian people:

PA Mufti Muhammad Hussein: “We ask Almighty Allah for a soon and speedy release for all our brave prisoners… Our heroic prisoners – all of them without exception – are sons of this precious homeland. The entire Palestinian people and every free person in this world view them with admiration and honor.”

Fatah Central Committee Secretary Jibril Rajoub: “In the shade of the Palestinian flag… we will all take refuge… draw nearer to one another, to think, eat, drink, sing, and live our lives as Palestinians, through the pride and glory of our people’s sacrifices – our Martyrs, our prisoners, our wounded… The Israelis assassinated Yasser Arafat because of his patriotism, and so too regarding Sheikh Ahmed Yassin (founder of Hamas responsible for murder of hundreds), and Abu Ali Mustafa (Secretary-General of PFLP terror org., responsible for many murders). They are giants. We must be loyal to this heritage. And also [to] those who are still in prison, and foremost among them Karim Younes… Maher Younes (murdered 1 together), Ahmad Sa’adat (leader of PFLP terror org., responsible for many murders), and Marwan Barghouti (convicted of murder of 5)… We have 6,000 giants inside the prisons whose names I cannot mention, but each one of them is a legend, each one of them is an ethos.”

Palestinian Media Watch has documented that Rajoub is fond of glorifying terrorists and murderers. Singling out murderer Muhannad Halabi who features twice in the PA’s filler above, Rajoub praised him and other murderers as “a crown on the head of every Palestinian.”

The following is a longer excerpt of Rajoub’s statement and more details on the murderers and terrorists glorified by the PA and its officials:

Fatah Central Committee Secretary Jibril Rajoub: “If the Arabs continue to pressure us together with the Israelis and the Americans – we will change the rules of engagement with the Israelis. We won’t open fire on the Arabs and we don’t want to escalate against anyone, but we are capable of controlling the rules of engagement. And by the way, all the options are open… In the shade of the Palestinian flag… we will all take refuge… draw nearer to one another, to think, eat, drink, sing, and live our lives as Palestinians, through the pride and glory of our people’s sacrifices – our Martyrs, our prisoners, our wounded… The Israelis assassinated Yasser Arafat because of his patriotism, and so too regarding Sheikh Ahmed Yassin, and Abu Ali Mustafa. They are giants. We must be loyal to this heritage. And also [to] those who are still in prison, and foremost among them Karim Younes… Maher Younes, Ahmad Sa’adat, and Marwan Barghouti… We have 6,000 giants inside the prisons whose names I cannot mention, but each one of them is a legend, each one of them is an ethos.”

Baha Alyan – 22 -year-old Palestinian terrorist who together with an accomplice on Oct. 13, 2015, boarded a bus in Jerusalem’s Armon Hanatziv neighborhood with a gun and a knife and attacked passengers, murdering Israelis Chaim Haviv (78), Alon Govberg (51), and Richard Lakin (76), and wounding 3 Israelis. Alyan was shot and killed by an Israeli security guard at the scene.

Muhannad Halabi – 19-year-old Palestinian terrorist who murdered 2 Israelis, Rabbi Nehemiah Lavi and Aharon Bennett, and – contrary to what Abbas Zaki claims in this speech – injured Bennett’s wife, Adele, and their 2-year-old son in a stabbing attack in the Old City of Jerusalem on Oct. 3, 2015. Following the attack, he was shot and killed by Israeli security forces. Prior to his attack, the terrorist wrote on Facebook that a “third Intifada” had begun.

Shadia Abu Ghazaleh – Female Palestinian terrorist and member of the Popular Front for the Liberation of Palestine (PFLP) terror organization who prepared bombs for many attacks against Israel. While she was preparing a bomb for an attack in Tel Aviv in 1968, it accidentally detonated and killed her.

Muhammad Al-Sabbagh – Palestinian terrorist who tortured and murdered three Palestinians because he suspected them of collaborating with Israel. Al-Sabbagh was serving a life sentence, but was released from prison in October 2013 as one of 104 terrorists whom Israel agreed to release to fulfill the PA’s precondition for renewing negotiations.

Ahmad Sha’aban – 23-year-old Palestinian terrorist, resident of East Jerusalem, who stabbed a 72-year-old woman outside the Jerusalem central bus station on Oct. 14, 2015. Sha’aban injured the woman and attempted to board a bus with passengers in order to continue his attack. Sha’aban was shot and killed by an Israeli policeman at the scene.

Is’haq Badran – 16-year-old Palestinian terrorist who stabbed and wounded 2 Israeli men, 62 and 65 years old, on Oct. 10, 2015, near the Damascus Gate in the Old City of Jerusalem. The terrorist was shot and killed by Israeli soldiers.

Diya Al-Talahmeh – 23-year-old Palestinian terrorist and Islamic Jihad member who blew himself up while trying to throw a hand grenade at an Israeli army vehicle on Sept. 22, 2015. His body was discovered by Israeli forces during searches carried out after the explosion.

Alaa Abu Jamal – Palestinian terrorist who deliberately drove his car into Israelis standing at a bus stop on Malchei Yisrael Street in Jerusalem on Oct. 13, 2015, hitting three people. Yeshayahu Krishevsky, 60, was murdered and the other two were injured. Abu Jamal then got out of his car and started attacking people with an axe, wounding others. The terrorist was killed by a security guard.

Jerusalem Har Nof synagogue terror attack – Arab terrorists Ghassan and Uday Abu Jamal from East Jerusalem entered a synagogue in the Har Nof neighborhood of Jerusalem on Nov. 18, 2014, and attacked worshippers with guns, knives and axes, murdering 5 worshippers and a police officer. 7 people were injured, 3 of them seriously. The terrorists were killed in an exchange of fire with Israeli Security Forces that arrived on the scene. A year later, a 6th victim died of his wounds.

Fadi Alloun – 19-year-old Palestinian terrorist who stabbed and injured Israeli citizen Moshe Malka (15) near the Old City of Jerusalem on Oct. 3, 2015. Alloun fled and was shot and killed by Israeli police. Before his attack, Alloun had written on his Facebook page: “Oh Allah, my goal is Martyrdom-death (Shahada) or victory for Allah… Allah is great.”

Muhammad Abu Khalaf – 20-year-old Palestinian terrorist who stabbed two Israeli border policemen from behind and wounded them at the Damascus Gate of the Old City of Jerusalem on Feb. 19, 2016. The border policemen defended themselves by shooting and killing Khalaf.

Muhammad Nazmi Shamasneh – 22-year-old Palestinian terrorist who choked and stabbed an Israeli soldier in order to take his weapon on Oct. 12, 2015, on bus no. 185 near the central bus station in Jerusalem. The terrorist also stabbed and injured two additional people. Shamasneh was shot and killed by Israeli police.

Muhammad Ali Al-Na’im – Palestinian terrorist and member of the Al-Quds Brigades (Islamic Jihad’s military wing) who placed a bomb next to the border fence between Israel and Gaza on Feb. 23, 2020. Al-Na’im was shot and killed by Israeli soldiers while placing the bomb.

Musbah Abu Sbeih – 39-year-old Palestinian terrorist who murdered 2 Israelis and wounded 5 others in 3 drive-by shooting attacks in Jerusalem on Oct. 9, 2016. Abu Sbeih, who held Israeli residency status, began his shooting spree at the Ammunition Hill light rail stop and continued to the Shimon Hatzadik neighborhood. He was killed in an exchange of fire with Israeli border police officers during the attack. On the morning of the attack, Abu Sbeih was due to turn himself in to begin a 4 month jail sentence, after being convicted in January 2015 on numerous counts of inciting to terror and supporting a terror organization. On his Facebook page, Abu Sbeih praised terror groups including Hamas as well as terrorists who carried out attacks and actively called for attacks against Israelis. In July 2016, Abu Sbeih was given a distancing order from the Temple Mount that was to be in effect until the end of October 2016.

Amjad Al-Jundi – 18-year-old Palestinian terrorist who stabbed an Israeli soldier and stole his weapon in the southern Israeli city of Kiryat Gat on Oct. 7, 2015. Al-Jundi then broke into an apartment in a nearby building and attempted to attack two Israeli women, but they managed to escape. Al-Jundi was subsequently shot and killed by Israeli police. The soldier and one of the women were lightly wounded in the attack.