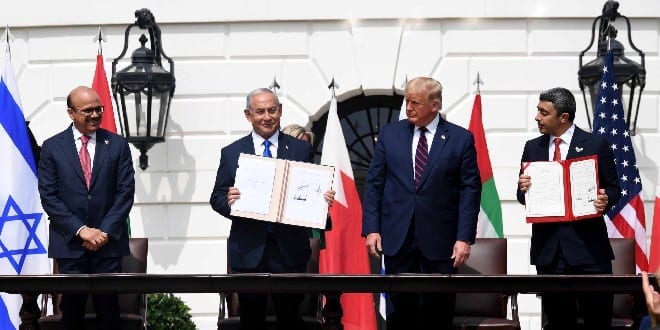 When the Abraham Accords between Israel and the United Arab Emirates were hastily announced from the White House in a mid-August press conference, Israelis were both caught by surprise and left to guess whether the benefits of an agreement between the Jewish state and a Sunni-Muslim country more than 1,000 miles away would be tangible and substantive or merely superficial.

Yet within just several weeks, the reality of the momentous move has become clear: the Abraham Accords represent a paradigm shift of biblical proportions.

The fast-moving nature of the agreements and the blessings they promise are consistent with the very name of the treaty. When the Torah first introduces the Jewish and Muslim patriarch, Abraham, in the Book of Genesis (Chapter 12), God tells him, Lech lecha, or “Get up and go.”

Abraham immediately left without delay. The Abraham Accords peace train has similarly embarked on its journey.

During the weeks that have passed since the original press conference, Bahrain formally signed a declaration of peace with Israel. U.S. President Donald Trump, whose administration helped broker the deals, has announced that as many as half a dozen more signings are on the way.

Israeli and Emirati airlines have agreed to fly commercially between their countries—via Saudi Arabian airspace. A ship with goods from the UAE arrived at Haifa Port. And multiple delegations have shuttled between Tel Aviv, Dubai and Manama. This in addition to the majestic White House official signing ceremony on Sept. 15.

And while Israelis cannot yet travel freely to the UAE or Bahrain—nor can tourists freely enter Israel due to coronavirus restrictions—it is becoming apparent that the fruits of the peace agreements will soon be distributed among the people of the nations that have agreed to cooperate.

As Barak Ravid reports in Axios, the seeds that have led to these formal agreements have been planted and nourished for years, via a secret Israeli diplomatic mission in Manama.

On Tuesday, U.S. Treasury Secretary Steven Mnuchin and UAE Minister of State for Financial Affairs Obaid Humaid Al-Tayer and UAE Economy Minister Abdulla Bin Touq Al Marri arrived in Israel for the historic signing of multiple cooperation agreements, including a mutual visa-exemption deal; plans to extend an Israeli oil pipeline that will bring Gulf oil to Europe; and the launch of a $3 billion Abraham Fund to fuel mutual entrepreneurial investments.

“We shall remember this day—a glorious day of peace,” he added.

Netanyahu’s strategic adviser Aaron Klein tells JNS that “we are witnessing the fruits of the Netanyahu Doctrine of peace from strength and peace in exchange for peace. Prime Minister Benjamin Netanyahu worked for years to build relations with Gulf and other Arab nations, and now those efforts are ushering in a new era of peace in the form of the Abraham Accords and the signing of bilateral agreements.”

One of the defining principles of the Netanyahu Doctrine is that making peace in the Middle East requires taking a regional approach. The Israeli premier has insisted that the Palestinians will only sincerely come to the negotiating table after Israel succeeds in forging agreements with other Middle Eastern countries. It is the exact opposite of what previous U.S. administrations and European governments have preached—that peace in the region will only come from first solving the Israeli-Palestinian conflict.

“Amid nonstop Palestinian intransigence, Netanyahu long advocated the outside-in approach, positing that peace between Israel and the Arab world could, perhaps, bring the Palestinians to engage in negotiations based on reality,” says Klein. “It remains to be seen whether the Palestinians will come around, but what is clear is that Gulf nations are acting in their own interests and the Palestinians no longer hold a veto over peace.”

Another defining principle of the Netanyahu Doctrine is that in order to defend the interests of the Jewish state, earn the respect of nations in the region and gain leverage in any negotiations, Israel needed to be strong, with a vibrant free market that unleashed Israel’s entrepreneurial spirit.

“Since the 1990s, Netanyahu has been stating publicly that peace between Israel and the Arab world would come from building Israel into an even greater economic and military superpower. Under Netanyahu’s leadership, Israel has become just that,” Klein says.

Klein suggests, however, that it was not only Netanyahu’s approach to the Palestinians that has led to the historic signings, but also his approach to the most belligerent actor in the region: Iran.

“Netanyahu’s at times singlehanded campaign to stop Iran from obtaining nuclear weapons further shifted the tectonic plates in the Middle East and aligned Israel even more with the moderate Arab world versus Iran’s forces of darkness and extremism,” he says.

Netanyahu has come under immense criticism during his tenure for his militant stance on Iran, which was at direct odds with that of former U.S. President Barak Obama; for his patient approach to managing, as opposed to solving, the Israeli-Palestinian conflict; and for his close friendship with the oft-polarizing Trump, who helped broker the accords and presented a new vision for “Peace to Prosperity” in the region.

“Now we are seeing history unfold, with the realization of Netanyahu’s efforts at forging peace with the UAE and Bahrain, bringing immediate economic and diplomatic benefits. A UAE delegation landed in Israel to sign major agreements. The Emirati foreign minister announced Abu Dhabi seeks to open its embassy in Israel as quickly as possible,” Klein says.

“And this is only the beginning,” he adds.

In the very next verses of the Genesis chapter, God tells Abraham, “I will make of you a great nation, and I will bless you. I will make your name great, and you shall be a blessing. I will bless those who bless you and curse those who curse you. And all the families of the earth shall bless themselves by you.”

May the name of Abraham continue to be a blessing for those who have already signed and those who will sign onto the accords in the months and years ahead.