Dumbing down the ‘Jewish Nobel Prize’ 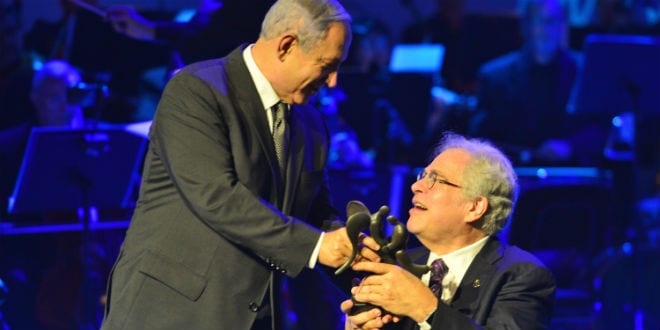 Did the Jewish people really need their own Nobel Prize? To the three wealthy Russian Jewish business “oligarchs” who endowed the Genesis Prize with $50 million in contributions, the answer was “yes.”

The Genesis Prize Foundation was set up in coordination with the Jewish Agency for Israel and the Prime Minister’s Office in 2012, and started handing out the annual award in 2014 to a group of rich, accomplished and, above all, famous honorees, who were then given the task of handing out $1 million in grants to worthy causes. The conceit of the exercise was to draw attention to well-known Jews who cared about Jewish causes, thereby setting a laudatory example to the next generation that being truly successful ought to also mean not forgetting about the need to feel connected to your fellow Jews and do good Jewish philanthropic deeds.

As a piece of public relations, it’s been a brilliant success, as the “Jewish Nobel Prize” is the kind of brand that, while absurd, is also the sort of thing that’s hard to forget.

But as an example of how to inspire young Jews, it’s a flop. Worse than that, it replicates all the worst aspects of organized American Jewish life. Its emphasis on toadying to big donors and celebrities has resulted in it being nothing more than a publicity stunt, even if the end result is that some good causes may get a bit of money out of it.

As foolish as the Genesis Prize has been in its first seven years, it’s gotten a lot worse. A committee won’t pick the next “Jewish Nobel” winner. Instead, it will be the result of an Internet vote by the public, which is being asked to choose between seven very different famous people.

Like the first seven prizewinners, there’s nothing wrong with any of this year’s nominees. They are all accomplished individuals who have done some things that are worthy of applause from a Jewish perspective.

Even so, there’s a fatal flaw to the contest. By attempting to mix in one person who is truly great by the traditional measures of greatness that Jews have respected for millennia to a group of celebs and fat cats, the geniuses behind the Genesis PR machine have actually exposed it as a parody of the Nobel Prizes rather than a Jewish variation on the theme.

Like a child’s game in which you are asked to choose what picture doesn’t belong with the others, Rabbi Jonathan Sacks doesn’t really fit in with the rest of the nominees.

The former Chief Rabbi of the United Kingdom, Sacks is the sort of person that countless generations of Jews have been taught to admire. He’s a communal leader, philosopher, author and Torah scholar. He lives and teaches Jewish values, and embodies the notion of being a light unto the nations while also staying true to the heritage and traditions of his people.

He has already been repeatedly honored by British Jewry, as well as the government of the United Kingdom that made him a member of the House of Lords—something that signified the respect with which that nation viewed a man who had so nobly represented his people in so many ways.

As such, putting him on a ballot where he must compete with singers, actors, movie directors and business moguls exposes the entire exercise as not so much an effort to honor greatness as a joke.

To point this out is not to show disrespect to Barbra Streisand, Steven Spielberg, Gal Gadot, Marc Benioff or even U.S. Supreme Court Justice Elena Kagan, who is the only other nominee who can be remotely compared to Sacks as a figure of genuine consequence. All of them are impressive in their own ways. And if this contest were, say, an Internet poll asking which of them you would like to be stuck on a desert island with, the results would be more interesting and the votes cast would say more about us than the nominees.

But as a competition for a Jewish Nobel, suffice it to say that having him compete against the others on the ballot does not enhance the reputation of Rabbi Sacks. That’s especially when you consider that the average Internet voter is a lot more likely to lean towards one of the celebrities than a great Jewish educator.

There was something to be said for past winners of the Genesis Prize though violinist and conductor Itzhak Perlman (2016), and refusenik and Soviet gulag prisoner Natan Sharansky (2020), were the only ones who could be said to have lived truly inspirational lives, as well as being beloved figures in the Jewish world. Justice Ruth Bader Ginsburg also fit into that category, but as a U.S. governmental official, she refused the award and was given a different honor.

The others were either celebrities like actors Michael Douglas and Natalie Portman (the latter who stirred controversy in 2018 by refusing to attend the ceremony, lest she be seen associating with Israeli Prime Minister Benjamin Netanyahu), or simply big givers like Michael Bloomberg and Robert Kraft (the latter who received the prize in spite of being arrested as part of an investigation of a prostitution ring not long after being named the winner in 2019).

But as idiotic as an Internet poll that pits a great rabbi up against “Wonder Woman,” “Borat,” a seminal film director, an idolized singer, a liberal tycoon and a judge may be, the Genesis Prize is still stuck with the same problem it had when its selection process was slightly more dignified.

If we really care about building Jewish life, especially in the United States—where the demographic collapse of non-Orthodox Jewry places the entire infrastructure of the community in peril—placing so much importance on a famous individual is a distraction from the necessity to breathe new life into our failing institutions. What the Jewish world needed was not another vehicle for applauding people who are already famous.

We spend far too much time caring about celebrities and the wealthy with Jewish charitable groups kowtowing to the whims of these individuals and their insatiable need to be recognized. What’s needed is a focus on the ordinary work that our communal organizations try to do keep Jewish life going and to stand up for Israel, as well as standing against anti-Semitism and anti-Israel bias.

If we are to have a Jewish Nobel, it should go to a Jewish teacher or a group that does great good. Such a prize might do more to inspire the next generation, who understandably regard the attention given to celebrity-driven honors with the sort of cynicism that is currently hemorrhaging Jewish life. In other words, just give it to Rabbi Sacks, rather than to any of the more popular figures on the ballot that are sure to best him.

Any award, no matter how smartly branded, stuck in the same failed paradigm of Jewish philanthropy that was already obsessed with wealth and fame simply does more harm than good.