Biden’s Promise: Muslims at Every level of Government

He shall be a wild ass of a man; His hand against everyone, And everyone’s hand against him; He shall dwell alongside of all his kinsmen.”

Home » Biden’s Promise: Muslims at Every level of Government 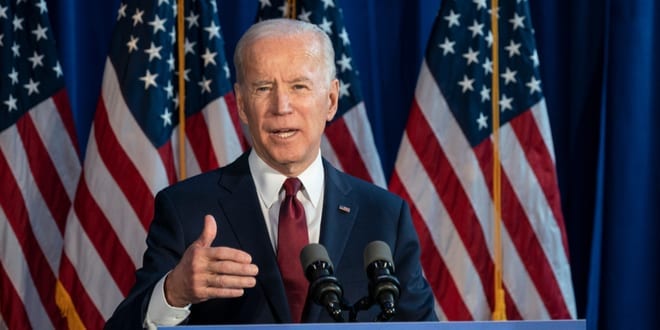 Joe Biden, former vice president and the Democratic candidate for the presidential election, addressed the 15th-anniversary event of the Muslim Advocates, the association of Muslim lawyers,  last Wednesday. In his address, he promised to introduce Muslims into every level of his administration.

Biden’s Address to the Muslim Advocates

“As president I’ll work with you to rip the poison of hate from our society, to honor your contributions and seek your ideas. My administration will look like America, with Muslim Americans serving at every level,” said Biden. “On day one I’ll end Trump’s unconstitutional Muslim Ban. I’ll push Congress to pass hate crimes legislation. I’ll implement the national strategy I’ve laid out since March to beat COVID. I’ll end the deadly inequities in healthcare, education, and opportunity that this crisis has amplified. And together we’ll rebuild the criminal justice system focused on redemption, not retribution.”

Biden was referring to the mislabeled “Muslim ban” more accurately known as Executive Order 13769, titled Protecting the Nation from Foreign Terrorist Entry into the United States. Though President Trump is criticized by Democrats for the order they consider xenophobic, it had its roots in the 1986 Visa Waiver Program initiated by President Ronald Reagan. The seven countries specified in Trump’s executive order were those specified as  “countries of concern” by Secretary of Homeland Security Jeh Johnson during the Obama administration as part of the Terrorist Travel Prevention Act.

“Today,” Biden declared, “trust is ebbing; hope seems elusive. Instead of healing, we’re being ripped apart. And I refuse to let that happen. We have too bright a future to leave it shipwrecked on the shoals of anger and division. As president, I’ll work with you to rip the poison of hate from our society, honor your contributions and seek your ideas. My administration will look like America, Muslim Americans serving at every level.”

In fact, Muslims at every level of government would look undecidedly unlike America as Muslims represent one percent of the general population. It is also disturbing to imagine a government run by people chosen for their religious affiliation rather than their qualifications.

At that point, Biden unabashedly pandered for votes.

“Please get everyone you know to vote – friends, family and colleagues, the whole community,” Biden said. “We can’t let anyone think their voices don’t count because the American people decide this election and define our future, the American people – you. There’s not a single thing we can’t do if we do it together. So let’s spread the faith; let’s get to work.”

Democrats: Party of the Muslims

One day before Biden addressed the Muslim group, Senator Bernie Sanders hosted a virtual “get out of the vote” event featuring Muslim-American elected officials. One of the featured speakers was Rep. Rashida Tlaib.

“We’re going to go in masses to the voting booth. And I’m calling on our Muslims across the country to know that we have to take up the man who birthed the Muslim ban,” Congresswoman Rashida Tlaib said. “We have to make sure we out-vote the hate.”

Ironically, despite her declaration to battle hatred, Tlaib, an American-born descendant of Israeli Arabs, has been accused of making anti-Semitic statements.

Biden has been courting Muslim voters during his entire campaign. In July, he gave a virtual speech to Emgage Action, a Muslim advocacy group. During the address, he quoted a section of the Koran which, though it sounded benign, had a significance recognized by Muslims alluding to jihad, a holy war against non-Muslims.