‘Chapters’ in Bible Were Invented by Anti-Semitic Christians. One Torah Educator Seeks To Reverse It

“He who lays plans to do harm Is called by men a schemer.”

Home » ‘Chapters’ in Bible Were Invented by Anti-Semitic Christians. One Torah Educator Seeks To Reverse It 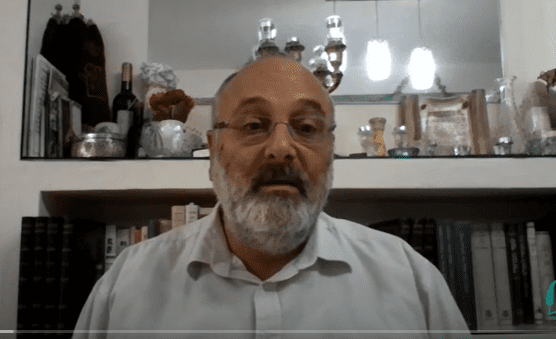 First, a little Biblical history. When God gave the Torah to Moses on Mount Sinai, it did not come down from Heaven neatly divided into the chapters with which we are familiar today.

Traditionally, the text of the first five books of Hebrew scriptures were divided by the rabbis into roughly 150 sedarim (sections or portions). For intriguing historical reasons which we will discuss, these original divisions have fallen into disuse.

Israel365 News spoke to Betzalel Ariel, a Torah educator from Beit El in the Benjamin region of Israel, who is trying to restore the sedarim to their original use. He explained that the rabbis divided the Biblical text thematically and their divisions help students of the Bible properly understand each topic in its entirety.

Ariel claims that the division into chapters, which came much later, was done with anti-Semitic, even evil intentions, in order to make the Jewish people look reprehensible.

The division of the Bible into chapters is generally attributed to Stephen Langton, the 13th century Archbishop of Canterbury. It’s important to note that history has judged Langton an anti-Semite. He ordered the Jews of England to wear an identifying white band, measuring approximately 2” x 12”  (5 cm x 30 cm), on their clothing. These identifying white bands influenced the yellow star Jews were required to wear during the Holocaust era.

Langton was also steeped in the prevailing replacement theology of his day, believing that the Church had replaced the Jewish people in the Eyes of God. This theology, according to Ariel, guided his division of the Bible into chapters that differed from the existing Jewish sedarim.

How The Christian Chapter Divisions Reflect Poorly On The Jewish People


Ariel asserted that, in the Christian chapter divisions, there are hundreds of chapters that begin with a verse highlighting the sinful behavior of the Jewish people.

For example, Exodus 32 opens with the verse describing the Sin of the Golden Calf.

When the people saw that Moshe was so long in coming down from the mountain, the people gathered against Aharon and said to him, “Come, make us a god who shall go before us, for that man Moshe, who brought us from the land of Egypt—we do not know what has happened to him.” Exodus 32:1

However, in the Jewish division, this section begins a verse earlier, with a much more favorable event — God giving the tablets of the Torah to Moses on Mt. Sinai.

When He finished speaking with him on Har Sinai, He gave Moshe the two tablets of the Pact, stone tablets inscribed with the finger of Hashem. Exodus 31:18

The lesson, according to Ariel, is, “While Moshe (Moses) is holding the tablets, Hashem (God) tells him about the chet haegel (the Sin of the Golden Calf). God did not take the Torah away from Moshe. Hashem didn’t give up on Am Yisrael (the people of Israel) even after they made the chet haegel.”

Another example is found in chapter 4 of the Book of Judges which begins with a critical verse.

The Israelites again did what was offensive to Hashem—Ehud now being dead. Judges 4:1

But the Jewish division again begins a verse prior, telling of the good deeds of Shamgar.

After him came Shamgar son of Anath, who slew six hundred Philistines with an ox-goad. He too was a champion of Yisrael. Judges 3:31

A third example will solidify the pattern.

Joshua chapter 7 begins with the sin of Achan.

The Israelites, however, violated the proscription: Achan son of Carmi son of Zabdi son of Zerach, of the tribe of Yehuda, took of that which was proscribed, and Hashem was incensed with the Israelites. Joshua 7:1

The Jewish division again begins much more favorably, just one verse prior, telling how God was with Joshua and about the growth of his reputation.

Hashem was with Yehoshua, and his fame spread throughout the land. Joshua 6: 27

Separating Shabbat From The Rest Of The Week

The Christian observance of the sabbath on Sunday is widely understood to be a manifestation of replacement theology, superseding the Jewish practice of observing Shabbat on the seventh day. In the Christian chapter divisions, Shabbat begins in the second chapter of Genesis

When a Jewish family makes kiddush (the blessing over wine or grape juice) on Friday night, they usher in Shabbat with these words from this week’s Torah portion. However, Jews begin kiddush with the end of the last verse of the previous chapter, “And there was evening and there was morning, the sixth day,” thus linking Shabbat to the previous six days of Creation.

And Hashem saw all that He had made, and found it very good. And there was evening and there was morning, the sixth day. Genesis 1:31

According to Ariel, “We want to say that the first six days are not standing alone. They are the preparation for Shabbat. Shabbat is part of the Seven Days of Creation. [The Christian division is] against our beliefs.”

How Jews Came To Use The Christian Chapter Divisions

The first Bible was printed in 1455 in Germany by Johann Gutenberg, who invented the printing press. The Gutenberg Bible used the chapter divisions created by Langton hundreds of years prior.

At that time, the printing industry was controlled by Christians and Christian censors had to approve books to be published. Despite being known as The People of the Book, Jews did not have the ability to publish their own texts.

Jacob ben Hayyim ben Isaac ibn Adonijah, known more simply as Jacob ben Hayyim, was a Hebrew Bible scholar. He worked for a Christian printer named Daniel Bomberg. Though a Christian himself, Bomberg specialized in printing Hebrew books and was the first non-Jew to do so.

In 1524, Bomberg printed the first Mikraot Gedolot, often referred to in English as the Rabbinic Bible, which includes rabbinic commentary along with an authoritative version of the Biblical text.

Despite being a Hebrew Bible scholar, Jacob ben Hayyim claimed in his introduction that he could not locate the original Hebrew sedarim. Instead, he used the common Christian chapter divisions to structure the first printed Jewish Bible.

In an ironic twist of history, Jacob ben Hayyim became an apostate Jew later in life and embraced Christianity. Whether his growing interest in Christianity led him to rely on Christian chapter divisions for his work or whether reading the Bible divided by an anti-Semitic Archbishop led him to give up his Jewish identity, is historically unclear.

Ariel feels differently. “We can do that! You can make changes if you believe it’s important. The time has come to give the Christians back their present to us and to learn in our tradition.”

He has a dream to reintroduce the Jewish divisions and teach the Bible to Jews according to the traditional way of dividing the text. “Let’s say the Christian chapters are not against Jews,” he proposed. “[Even so], why do we prefer them more than the Jewish divisions? Why do our kids have to learn from chapters? We are in Israel! We are not under control of the Christians [anymore].”

Under the name Shiva LeVitzaron (Return to the stronghold), words that come from the Hebrew  of Zechariah 9:12, Ariel is publishing a Hebrew Bible that restores the traditional Jewish divisions.

His hope is that this restoration, being done in the Land of Israel, will correct an historic error and replace the Christian chapter divisions that were originally created in a climate permeated with anti-Semitic sentiment.