Every spot on which your foot treads shall be yours; your territory shall extend from the wilderness to the Lebanon and from the River—the Euphrates—to the Western Sea. 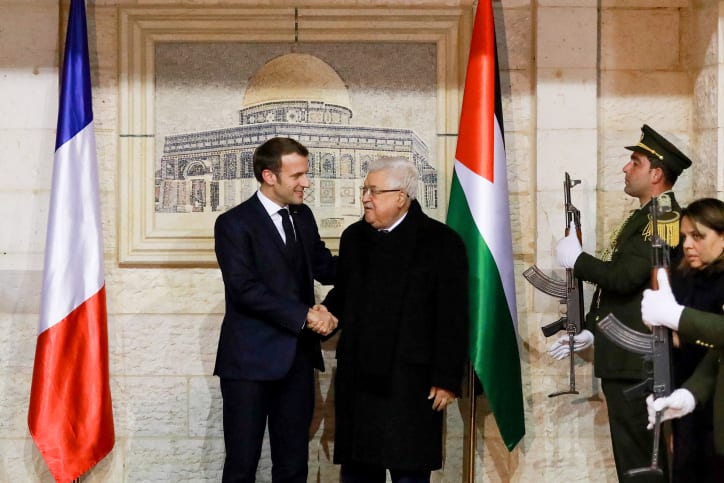 A recent report cites senior French diplomats as saying that the Trump-negotiated Abraham Accords have changed the political reality in the Middle East, opening up the possibility of a negotiated reconciliation between Israel and the Palestinians that does not necessarily require the creation of an independent Palestinian entity inside Israel.

REPORT: “France is Updating Its Position”

A report in Hebrew-language Maariv News cited diplomatic sources in Paris as saying, “France is updating its position on the Israeli-Palestinian issue.”

Eric Danon, the  French Ambassador to Israel went on to say, “We can accept any solution that the Palestinians and Israelis agree on/”

In a discussion initiated by the European Leadership Network (ELNET), a non-governmental organization whose stated mission is to strengthen relations between Europe and Israel, the French Ambassador to Israel Eric Danon said: “We will not negotiate on behalf of the Palestinians. This is a bilateral question and we say that a new situation that has arisen must be taken into account and returned to the negotiating table.”

“No one knows what will be in the end – one state, two states, with or without Jerusalem,” Danon said. “What we prefer and think will be best is a two-state solution. Does that mean we can not agree on something else? Not at all. We can accept Any solution that the Palestinians and Israelis will agree on.”

“Six months ago, no one could have imagined that Israel, the United Arab Emirates, and Bahrain would sign the Abrahamic Accords,” he added. “The Middle East has completely changed because of the position of the United States, Iran, and Turkey, because Israel has become a new regional power and because of the fatigue of the Palestinian question.”

Danon has said similar things in the past, but they were defined by the French government as a “private opinion” Maariv cited a diplomatic observer in Paris as saying that “there is a move in the French position towards the US position”.

French diplomatic sources added: “French diplomacy is having a hard time throwing all its weight behind a two-state solution, as it is becoming unrealistic on the ground. What the ambassador said is self-evident. It is important to resume negotiations as soon as possible. The Palestinians have never been so weak. They could lose everything.”

Officially, Nothing Has Changed

Officially, the French Foreign Ministry adhered to its former position: “A sustainable solution to the conflict requires the establishment of two states based on the 1967 lines with Jerusalem as a capital.”

In 2015, the French government tried to impose a two-year deadline for a two-state solution if negotiations between Israel and the Palestinians did not result in an agreement. Prime Minister Netanyahu rejected the proposition while PA President Mahmoud Abbas refused to commit to recognizing the State of Israel as a condition for the creation of a Palestinian state.

It is significant to note that in his speech at the UN General Assembly, President Emanuel Macron spoke of “crucial negotiations that will allow the Palestinians to finally enjoy their rights” – but he did not mention the two countries.

Asharq Al Awsat, an Arabic international newspaper, reported the story, citing a senior Palestinian source as saying that the Palestinian Authority has stated it will only accept a two-state solution based on the creation of a Palestinian state inside Israel’s borders with Jerusalem as its capital.

Asharq Al Awsat quoted Palestinian Prime Minister Mohammad Shtayyeh as saying that pressure on the PA would stop after the US election, implying that he anticipated a victory by the Democrats who support a two-state solution.