Pagan ‘Medusa’ Idol to be Erected in Middle of NYC: A Homage for ‘Rape Victims’

When noon came, Eliyahu mocked them, saying, “Shout louder! After all, he is a god. But he may be in conversation, he may be detained, or he may be on a journey, or perhaps he is asleep and will wake up.”

Home » Pagan ‘Medusa’ Idol to be Erected in Middle of NYC: A Homage for ‘Rape Victims’ 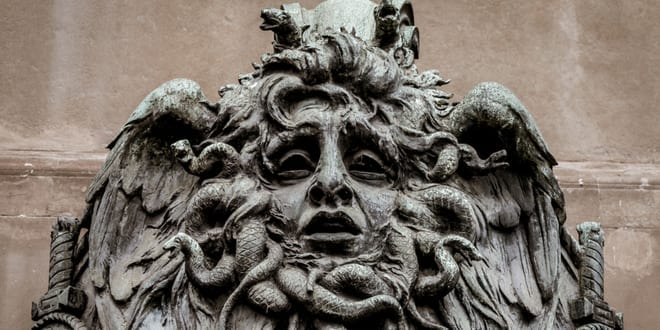 Ironically, the left-wing rage movement that first manifested by tearing down statues now has a statue of its own; an inversion of a story from Greek mythology. While the creators pay homage to idolatry, their revised version actually gives over precisely the opposite message of what its creators intended.

Medusa With The Head of Perseus

A new statue named  “Medusa with the head of Perseus” will be unveiled in New York City in front of the County Criminal Courthouse in Collect Pond Park on Tuesday.

The seven-foot-tall 1,000-pound bronze sculpture depicts  Medusa who according to Greek Mythology, was so beautiful that the sea-god Poseidon raped her in the goddess Athena’s temple. Athena then punished her for desecrating her sacred space by cursing Medusa with a head full of snakes and a gaze that turns men to stone. Medusa was exiled and later hunted down by Perseus, who beheaded her. He then used her head, which retained its ability to turn onlookers to stone, as a weapon.

But the new rendition that will be on display in New York City depicts a different version of the myth, one in which Medusa clutches the head of Perseus in her hand. It is an “inversion” of an inversion of Benvenuto Cellini’s famous “Perseus with the Head of Medusa” sculpture created in the 16th century. The project’s website explains the meaning behind the revised imagery:

“Through this work, Garbati asks ‘how can a triumph be possible if you are defeating a victim?’” the site asks. “This narrative of victim-shaming in stories of sexual violence echoes through time, and into the present day “me too” movement. In 2018, Garbati posted a photograph of his original sculpture to social media. This re-imagined Medusa went viral and became a symbol of resistance worldwide, inspiring thousands of women to reach out and share their own stories. Garbati’s Medusa questions the mythic figure’s characterization as a monster, and investigates the woman behind the myth.”

Beheading as a Symbol of Justice

The statue,  commissioned by NYC’s “Art in the Parks” program, will be on display for six months and the artist, Luciano Garbati, claims the location is significant to the intended message:

“The place chosen is not accidental, since there they judge cases for crimes related to violence against women,” Garbati wrote on Instagram. “We are already in the final stage working on the last details of this sculpture that became a symbol of justice for many women.”

The website described the location as the scene “of high profile abuse cases including the recent Harvey Weinstein trial.”

The Message They Got Wrong

But many have questioned the message and the medium of the new installation. Ashe Schow explained in the Daily Wire that the image does not, in fact, give an anti-rape message since the head clutched in Medusa’s hand is Perseus and not the rapist Poseidon.

“So, this statue depicts Medusa killing not her rapist, but some other guy who was set up by yet another person, which doesn’t exactly give the impression the sculptors want,” Schow wrote. “It does, however, create a perfect analogy for critics of #MeToo, who believe the movement went far beyond its intent to root out sexual abusers and instead became a forum to accuse any man without having to provide evidence. As has been detailed extensively, numerous #MeToo allegations fell apart under slight scrutiny.”

“Further, the Medusa sculpture gives the impression that it’s okay to behead a man (metaphorically, of course) even if he isn’t the abuser, which plays right into the mob mentality surround #MeToo. An allegation must merely be made before thousands demand the accused lose their livelihood. Due process be damned.”

Medusa as a Feminist and Left-Wing Icon

In fact, Medusa has frequently been adopted by modern feminists as a symbol of female rage. The authors of the feminist manifesto, Female Rage: Unlocking Its Secrets, Claiming Its Power noted that “When we asked women what female rage looks like to them, it was always Medusa, the snaky-haired monster of myth, who came to mind … In one interview after another we were told that Medusa is ‘the most horrific woman in the world’ … [though] none of the women we interviewed could remember the details of the myth.”

Ironically, in her November 2016 Atlantic essay called Medusa the original ‘Nasty Woman,’ Elizabeth Johnston states that Medusa has been repeatedly compared to Clinton during the 2016 presidential election.

The End-of-Days War of the Idols

Six months ago, the rallying cry of the radical left-wing focused on tearing down statues and monuments to historical figures that some felt were racist. As mob rule took over, many monuments that were not connected to racism and others that were in fact symbols of the right against racism were targeted. The situation deteriorated to the point where Shaun King, a leader in the Black Lives Matter movement, called for the destruction of Christian depictions of Jesus, who King described as a “symbol of white supremacy.”

Rabbi Yosef Berger, the rabbi of King David’s Tomb on Mount Zion, noted that this “battle of the idols” was a necessary precursor to the final redemption.

“In ancient times, rulers used idols to establish their kingdom, as a way of displaying to the public who was in charge,” Rabbi Berger said. “The statue is a powerful symbol of the end of a dynasty. As long as a king is in power, he will never allow his statue to be removed.”

“But this is not just political. This aspect of kingship, the placing of statues, has its roots in idolatry,” Rabbi Berger said, noting that the Prophet Ezekiel predicted that the Messiah will be preceded by the destruction of religious idols along with the governments.

Thus said Hashem: I will destroy the fetishes and make an end of the idols in Noph; and no longer shall there be a prince in the land of Egypt; and I will strike the land of Egypt with fear. Ezekiel 30:13

“Until now, the world has been dominated by wars between religions,” Rabbi Berger said. “Each religion claims they are the true way to serve God. But we are now in the end-of-days and the war is now between those who say there is a God versus those who say that there is no God and religion has to be abolished.”

“This is a good thing,” Rabbi Berger assured. “This is preparing the way, creating a vacuum into which a universal belief in Hashem (God, literally ‘the name’) as the One True King can naturally flow. And this will be the World of Messiah.”