Hashem will ward off from you all sickness; He will not bring upon you any of the dreadful diseases of Egypt, about which you know, but will inflict them upon all your enemies. 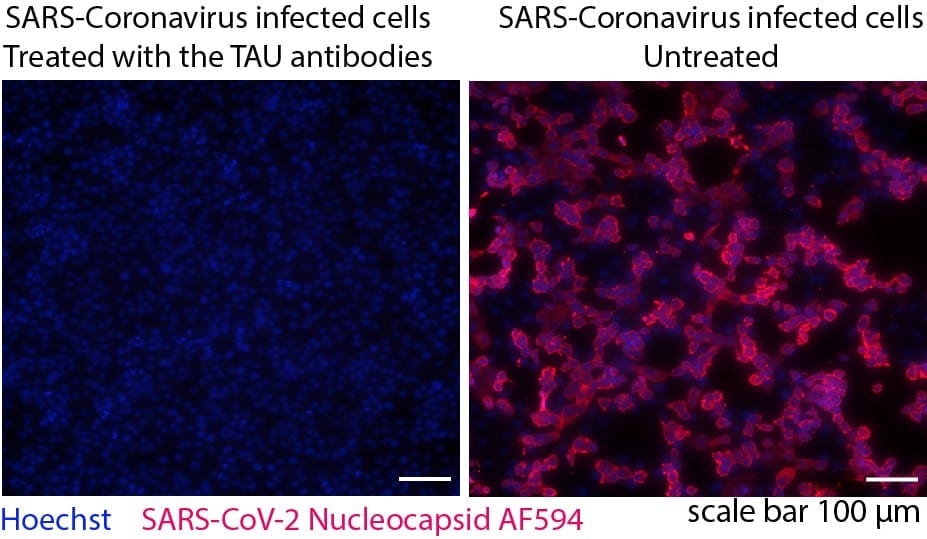 It’s been proven only in cell cultures Tel Aviv University (TAU) labs, but its scientists say they have made a COVID-19 “breakthrough” – by developing an antibody cocktail that in the future could serve as both medication for patients and as preventive treatment for high-risk populations

The antibody cocktail, derived from the blood of COVID-19 patients in Israel, is a safe natural substance. “Since the antibodies are natural and remain stable in the blood, one injection can be protective from COVID-19 for several weeks or even several months,” said Dr. Natalia Freund and doctoral student Michael Mor at TAU’s Sackler Faculty of Medicine. The scientific breakthrough was achieved at their Laboratory of Human Antibody Research and is about to be published in the PLOS (US Public Library of Science) Pathogens journal under the title “Multi-Clonal Live SARS-CoV-2 In Vitro Neutralization by Antibodies Isolated from Severe COVID-19 Convalescent Donors.”

Now that the researchers proved the effectiveness of the antibody cocktail in cell cultures, the next stage will be a clinical trial in humans.

The study also found that people with mild symptoms or asymptomatic COVID-19 develop a weaker antibody reaction and thus may contract the disease again. In contrast, all severely ill patients analyzed by the researchers developed neutralizing antibodies that are likely to protect them from reinfection. TAU has submitted through Ramot, its technology transfer arm, a patent application for all antibodies discovered by the researchers.

The team sequenced thousands of antibodies produced in the bodies of Israeli COVID-19 patients and were able to isolate and characterize six antibodies derived from the blood of two severely ill patients. They then proved that combinations of three antibodies at a time act as an effective cocktail against COVID-19 – providing natural immunity, possibly for as long as several months.

Their research began in April of this year, soon after the pandemic reached Israel. Freund and her group recruited 18 of Israel’s earliest COVID-19 patients – 10 with mild or no symptoms and eight severely ill patients who were hospitalized and even ventilated at the Tel Aviv Sourasky Medical Center and Kaplan Medical Center in Rehovot. All participants recovered from the disease. “We wanted to understand the antibody response following infection with COVID-19,” explained Freund. “One question we asked was whether there was any difference between mild and severe cases with regard to both the quality and quantity of the anti-viral antibodies produced by the immune system. To find an answer, we conducted genetic sequencing of thousands of antibodies derived from the participants’ blood, then cloned them in the lab and tested their effectiveness in neutralizing the virus.”

They found a significant statistical difference between the two groups of patients in the ability of their antibodies to neutralize COVID-19: Only a small portion of the mildly ill participants developed neutralizing antibodies, and some developed no antibodies whatsoever.

“Thus, we may assume that people who were infected but remained asymptomatic or developed very mild symptoms may possibly contract the disease a second time. The blood of all severely ill patients, on the other hand, contained neutralizing antibodies that will probably protect them from reinfection. However, it is not yet clear how long these antibodies remain in the blood, or in other words – whether they provide long-term protection,” she added.

In the second stage of the project, the researches tried to isolate specific antibodies – from the thousands that had been sequenced – that stop the virus from binding the human cell and replicating itself inside the cell. The researchers were able to identify six different oness obtained from two severely ill participants and prove that they were effective in both treating and preventing infection in cell cultures.

“These are six antibodies bind different target areas on the virus,” noted Freund. “It’s not a single mechanism but rather several complimentary mechanisms of action. The antibodies identify various weak spots on the virus, bind these spots and neutralize it. We tested the antibody cocktail on the live virus in a cell culture and saw that the antibodies bind the virus in a way that blocks it and prevents it from penetrating the cells. Our vision is that in the future, the cocktail will be used to treat COVID-19 patients – like the experimental cocktail administered to President Trump or as a preventive measure for high-risk populations and medical personnel – until the much-awaited vaccine finally arrives.”

They stressed that they didn’t develop this cocktail – it was created naturally by the patients’ immune systems, which means that it is probably safe for use. Since these antibodies are stable in the blood, a preventive injection could provide protection for several weeks and possibly even several months. As noted above, the next stage in this research project will be testing the cocktail on humans,