Forces will be levied by him; they will desecrate the temple, the fortress; they will abolish the regular offering and set up the appalling abomination. 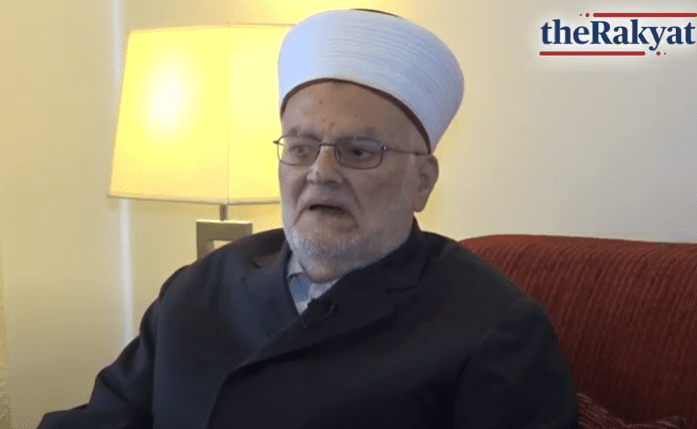 A prominent Palestinian religious leader slammed the Gulf States for normalizing relations with Israel by claiming that the Abraham Accords are based on the “false Zionist narrative” that the Jewish Temples once stood on the Temple Mount.

In a sermon on Friday, Sheikh Ekrima Sa’id Sabri, the former Grand Mufti of Jerusalem appointed by Yasser Arafat and the current head of the Temple Mount Islamic council, warned that Israel has been successful in marketing the “Zionist narrative” that the Al Aqsa Mosque is situated on land that was once part of the Jewish Temple.

Sabri warned that Israel had succeeded in persuading some Arab leaders to accept the “Zionist narrative” of Jewish Temples once standing on the Temple Mount. Sabri claimed that it was this false narrative that led to the normalization of relations between the United Arab Emirates and Bahrain with Israel. On the other hand, he condemned the incompetence of Muslims in marketing the Islamic narrative by clerics and the media.

The Sheikh warned that the “occupation” and the settlers are working to take over specific places in the al-Aqsa. In this statement, Sabri is incorrectly using the term “Al Aqsa’ to refer to the entire Temple Mount rather than just the silver-domed mosque at the southern end of the Temple Mount complex.

Sabri claimed that Israel did not respect the sanctity of Al-Aqsa, He claimed that Israel is working to sever the ties between Muslims and the site by creating “delusions” among “settlers” (Jews who live in Judea and Samaria). According to Sabri, this illusion was built around a false narrative that “Palestine” was the land that Jews had a right to, and that the Temple will be built on the ruins of the Al-Aqsa Mosque.

According to Sabri, Israel’s “greed” does not stop and is also reflected in daily “infiltrations” to Al-Aqsa in an attempt to impose a new reality. Again, since Jews are not permitted to enter the Al-Aqsa Mosque, it is clear that Sabri is using the term ‘Al-Aqsa’ to refer to the entire Temple Mount.

Dr. Mordechai Kedar, a senior lecturer in the Department of Arabic at Bar-Ilan University, unpacked Sabri’s comments, noting the tenuous connection between Islam and the Temple Mount.

“There is no mention of Jerusalem or the Temples in the Koran,” Dr. Kedar said, “The Koran does relate that Allah told the Jews to go into the land and they refused. This is, of course, the Biblical story of the spies after the Exodus from Egypt.”

Though the Jewish Temple are not explicitly mentioned in the Koran, they are undoubtedly the basis for the Muslim presence at the site.

“However, Jerusalem is referred to in the hadith as Bayit al-Maqdis, which is the Arabic translation of the Hebrew, ‘Beit Hamikdash’ (house of the holy, i.e. the Temple), Dr. Kedar said. “No doubt this is what the Jews called the Temple Mount and the Arabs took this and translated it.”

Islam and Judaism a

Dr. Kedar emphasized that the current conflict leading to a Muslim ban on Jewish worship at the Temple Mount was not always the case.

“In the seventh century, Jews viewed the beginnings of Islam as a sign the geula (redemption) was coming,” Dr. Kedar said. “For hundreds of years, the Byzantine Christians barred the Jews from entering Jerusalem. In the seventh century, the new Muslim religion allowed Jews to come to Jerusalem. Jews viewed Islam in a positive light as it resembled Judaism, having taken many elements including Biblical stories from Judaism.

“This positive Jewish attitude was reciprocated by the Muslims as the Jews were not trying to establish a Jewish state on Muslim land. Jews were everywhere in Arab and Muslim countries and the Arabs viewed them as the elite. There is a hadith that relates how Jews were permitted to bring incense to the area of the Holy of Holies on the Temple Mount in the eighth century.”

Dr. Kedar explained that using the term ‘Al Aqsa’ to refer to the entire Temple Mount is a recent phenomenon that is entirely based in a flawed political narrative.

During the Ottoman Empire, there were periods when Jews not only prayed on the Temple Mount, but the Jews were permitted to burn incense to be burned on the rock inside the Dome of the Rock where the Holy of Holies once stood,” Dr. Kedar said. “This was because it was based on Islamic sources. This should have been the status quo.”

Dr. Kedar explained that the Abraham Accords did not refer to Jerusalem at all, and this is hugely problematic for the Palestinian leadership.

“The Jerusalem issue is much less important to the Gulf States, which is a matter of enormous concern for Sheikh Sabri,” Dr. Kedar explained. “Jerusalem and the Temple Mount are at the epicenter of the Palestinian story. Without Jerusalem and Al Aqsa, the Palestinian issue has almost no meaning. It is like whiskers without a cat. This is why they keep repeating the allegation that the Jews have no connection to the Temple Mount or Jerusalem even though this flies in the face of all recorded history.”

“In Islam, religion is used to give legitimacy to political issues. The Saudis do this, as does Iran and Turkey. Religion and politics in Islam are inseparable. Islam without political power is nothing.”