“Hashem restored Iyov‘s fortunes when he prayed on behalf of his friends, and Hashem gave Iyov twice what he had before.” 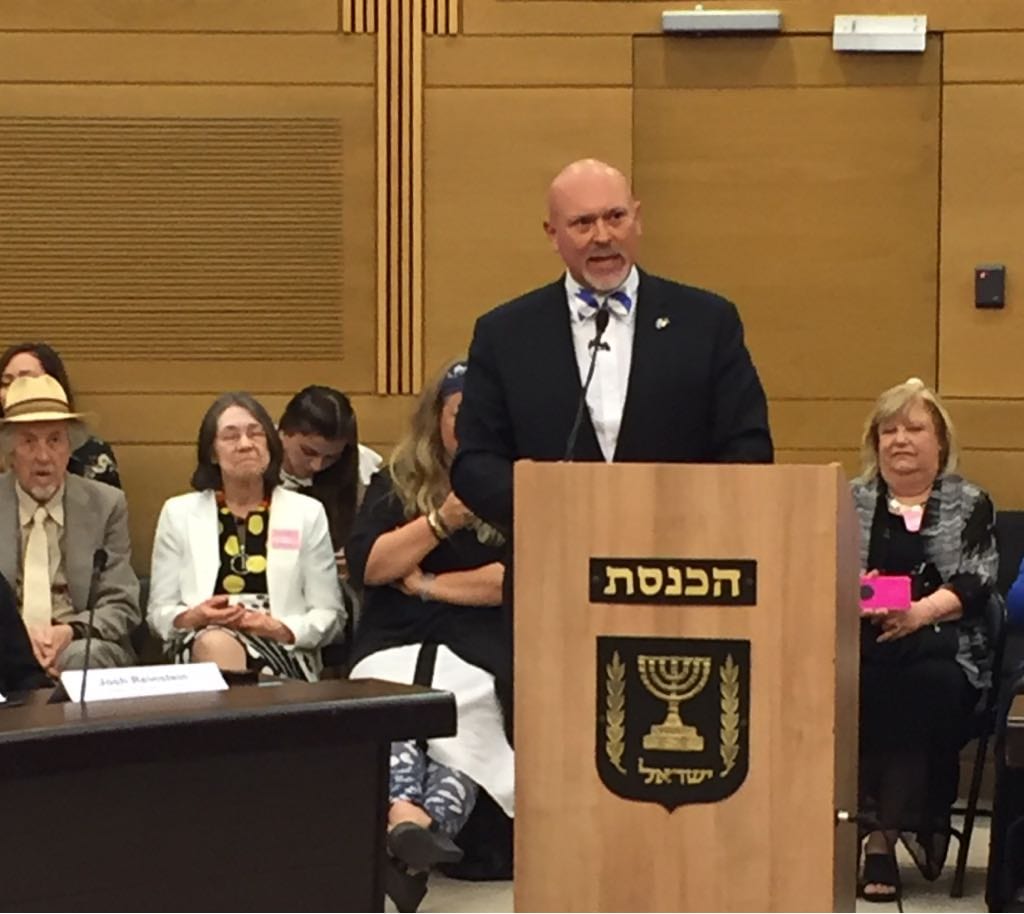 Last week, as the holiday of Sukkot (Feast of Tabernacles) entered, the Israel Allies Foundation published its first annual list of Israel’s Top 50 Christian Allies. Israel365 News spoke to some of the recipients about the honor, and about their work on behalf of Israel.

Former South Carolina State Representative Alan Clemmons has protected and defended Israel through multiple legislative efforts for nearly  two decades. He told Israel365 News, “I’m grateful for this honor and the validation that it brings to the efforts of the Christian Zionist community! To be recognized as among the most impactful supporters of Israel worldwide, alongside respected leaders and friends like Mike Huckabee, John Hagee, Larry Huch, Mike Evans and Jobst Bittner, was a humbling honor that only further motivates my efforts.”

Clemmons gave special recognition to his partner Joe Sabag with whom he feels the honor should be shared. “Over the last decade, Joe has developed into America’s most visionary and accomplished pro-Israel policy advocate, providing the resources and support necessary for legislators to succeed in these efforts. Every unprecedented Israel-related legislative win that I have led featured incredible displays of expertise and ability by Joe!”

Clemmons shared that his “love of the Jewish Nation is grounded primarily in my Christian faith. As a lifelong member of the Church of Jesus Christ of Latter-day Saints, I was taught from an early age that Jews are God’s covenant people. The land of Israel being central to that covenant, support for Israel is my personal Christian response to the Biblical command in parshat (Torah portion) Lech Lecha to bless the Jewish nation.

Clemmons claims that he is South Carolina’s “most outspoken Christian advocate for the Land of Israel and an ardent opponent of all brands of anti-Semitism. In fact, all who drive past my Myrtle Beach law office will see the [Israeli flag] flying proudly beside the American flag.”

Such outspoken support for Israel hasn’t come without a price. “I have been threatened and verbally attacked for my support of Israel, and these assaults demonstrate that one does not have to be Jewish to be a victim of anti-Semitism.

“On several occasions, during my nearly two decades of elected service in the House of Representatives, the classic anti-Semitic charge of dual loyalty, alleging that I’m an ‘agent of Israel’, has been leveled. Additionally, I’ve had potential clients refuse my representation. While they are not too common in a state such as South Carolina, where support for Israel is cherished as a point of American patriotism, I meet those incidents of anti-Semitism undeterred as a ‘red badge of courage’ for doing what’s right.”

Clemmons is “deeply humbled to be recognized in such a prominent way for my legislative work in the ongoing war against anti-Semitism. Whether it’s state-level implementation of Iran sanctions, recognition of anti-Zionism as a potential manifestation of anti-Semitism, protecting Jewish students on campus from crime and discrimination, or fighting the hatred of the BDS Movement.”

He emphasized that he works with “an army of legislative colleagues in South Carolina and activists throughout America who [also] deserve accolades.”  Clemmons singled out Arizona Senator Paul Boyer and Texas Representative Phil King and claimed that their work against anti-Semitism “in fulfillment of Biblical promise, has brought great blessings to their state and nation.”

Reacting to being named one of Israel’s top 50 Christian allies, international Christian broadcaster Earl Cox told Israel365 News, “I was amazingly surprised since most of the humanitarian work my wife and I do is accomplished behind the scenes, without publicity or fanfare.  The bomb shelter program, food and supplies to those in need (Holocaust survivors, victims of terror and others), and the IDF and Border Police are projects I feel led by God to undertake. Cox signs off on all his radio and television programs with his signature line, “Because God loves Israel, I do, too.” One of his first pro-Israel projects was sponsoring a billboard on the Ayalon Highway near Tel Aviv that proclaimed, “Christians in Charleston, SC support Israel”

Cox acknowledged that he quickly learned, “that nothing divides a room or ‘friends’ quicker than talking about Israel.  Those who professed to be Christians were very upset with this billboard and its message. They felt it would bring attention to Charleston from terrorists.  Conversely, Bible-believing Evangelical Christians embraced the message enthusiastically.”

Cox plans to continue his media and humanitarian work on behalf of Israel. He emphasized that his work building bridges of friendship and understanding between Christian and Jewish communities is more important than ever.  “We who love God, freedom and democracy must stand together strongly as one,” he asserted.

As Senior Pastor of New Beginnings Church in Dallas, Texas, Pastor Larry Huch attributes his mission of supporting Israel to God. “I feel that God has given me a mission and that is to stand for the nation of Israel and the Jewish people around the world.” His God-given mission includes bringing “Jews and gentiles together in unity” and helping “educate the church on God’s promise to the Jewish people that He would return them to their ‘Promised Land’ and that the land of Israel belongs to them.”
Upon being named on of Israel’s top 50 Christian allies, Huch commented, “When I found out that I was given this great honor, it not only made me feel very grateful, but it also motivates me to work even harder and stand up as tall as I can for the great nation of Israel and our Jewish brothers and sisters around the world.”

Huch visited Israel for the first time approximately 25 years ago. “To read the Bible in the land in which it was written will change anyone’s life. I had been taught the terrible lie of what Christians call replacement theology – that somehow, the church had replaced Israel and the Jewish people in the eyes of God.

“It was on that first trip that my ‘eyes were opened’ and I realized that God has never changed His mind about Israel or the Jewish people and that by God’s grace, the church had not replaced Israel but were ‘grafted in’, that Israel and the Torah was the root of our faith.

“On that first trip to Israel, I felt God speak to my heart that I was to reread the Bible – the Torah – through the eyes of a Jewish Abraham, a Jewish Isaac, a Jewish David and a Jewish Jesus.  As I reread the teachings of all of God’s Word, my love and respect for Israel and all of the Jewish people has grown and grown over the years.

“I truly feel like I am home when I come back to Israel.  I feel like God has led me on my own spiritual aliyah (ascension), back to Jerusalem and Israel.”

“The Christian church had been told a lie about Israel and the Jewish people for almost 2,000 years. We were told the lie blaming the Jews for killing Jesus, the lie that the church had replaced Israel and the church was the ‘new Israel’. We were told the lie that God was finished with the Jews and the Christians were the new ‘apple of God’s eye’.”

Huch began teaching that, “The land of Israel belongs to the Jewish people” and that “God will bring them back to the Promised Land from the four corners of the earth.” Even more, he taught that, “not only will they return to Israel, but we as Christians are to help this happen.”

Gradually, people began to listen. Today, he says, “my wife Tiz and I teach not only in our church here in Dallas, Texas. but on our TV program every day that goes around the world. Hundreds of thousands of people are not only listening, but are making their own ‘aliyah’, rising up to stand with the nation of Israel and all Jewish people, wherever they are.”

I don’t have the words to express how blessed I am to have fallen in love with Israel – the land and the people,” he concluded.


Founder of Proclaiming Justice To The Nations (PJTN), Laurie Cardoza-Moore told Israel365 News, “I was stunned and honored to have been selected for this generous recognition.” Like many of her fellow honorees, she shares credit with her colleagues. “Hashem has blessed me with amazing individuals who are equally committed to the holy work before us. I could not have accomplished all of our groundbreaking work without those who have put their hands to the plow and are helping me push this mission forward to its completion.”


Cardoza-Moore’s mission is driven by this Biblical verse:

Justice, justice shall you pursue, that you may thrive and occupy the land that Hashem your God is giving you. Deuteronomy 16:20

“When one sees evil or that which is unjust, it should be the desire of all humanity to confront it,” she declared.

Her love of Israel emanates, “from deep within my soul.  It is the manifestation of my faith in the Almighty and the covenant He made with all Israel. “

Although she is a Christian, Cardoza-Moore has Jewish ancestry. Referring to the Inquisition when Jews were forcibly converted to Catholicism on pain of death, she shared that, “My Sephardic ancestors’ voices were silenced 500 years ago. They were forced into hiding to preserve themselves for posterity.  I will never forget where I came from. The sacrifice my ancestors made in order for me to be here today will not be lost to the winds of history.  I feel like there are generations standing with me and lifting up my arms for the day of this battle.”

Cardoza-Moore refers to herself as “a passionate student of the Bible and history,” which she believes God uses “to lay the foundation for the destiny He has called me.”

Though she regularly comes face-to-face with anti-Semitism from “the far right, the left and Islam,” what distresses her the most is the anti-Semitism that “is coming from the Christian church. I never imagined that the same people who say they love God and follow a Jewish Messiah could support values that are not reflected in the Bible. The mission I’ve been called to has allowed me to see the extent of that hatred.”

Cardoza-Moore shared that she has paid a high price for her support of Israel and the Jewish people. “But knowing that I’m standing on over 3,000 years of Biblical truth provides the resolve within me to stand in the face of any opposition I may encounter,” she concluded.