On that day Hashem made a covenant with Avram, saying, “To your offspring I assign this land, from the river of Egypt to the great river, the river Euphrates: 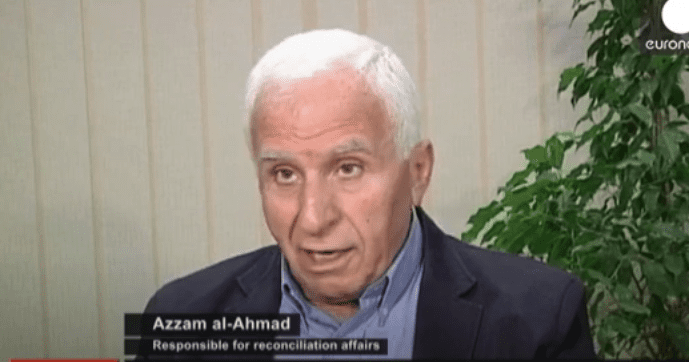 Euphrates to the Nile

“We hope that the people [of the UAE and Bahrain] will restrain [their leaders] and make them reconsider what they have signed. Do not destroy yourselves and the future of the entire Arab nation,” al Ahmad said. “We are defending Mecca, Baghdad, Cairo, Amman, and Damascus. This is our destiny as Palestinians. We are the Murabitun in Jerusalem who defend it from the Zionist territorial designs from the Euphrates to the Nile. We will continue to serve as the spearhead in the confrontation against the American administration and the Zionist movement.”

Defenders of the faith

“We will continue to serve as the spearhead and will continue to persevere and fight,” al-Ahmad concluded. “We have been fighting for over 100 years in defense of the Arab nation and the Islamic and Christian holy sites.”

Al Ahmad’s reference to the Euphrates and Nile is based on the Biblical description of the land promised to Abraham’s descendants.

On that day Hashem made a covenant with Avram, saying, “To your offspring I assign this land, from the river of Egypt to the great river, the river Euphrates: Genesis 15:18

The precise boundaries of the promised land is a complicated subject that changed drastically throughout the 5,000-year history of the Jews in the land. The description in Genesis is, in fact, the first of three Biblical descriptions of the borders of the land God promised to the Jews.

A detailed description is outlined in Numbers chapter 34 for the purposes of establishing regions ascribed to each tribe. These borders are repeated in Ezekial chapter 37.

The final description of the borders is the territory that will be acquired in stages.

The precise borders of Israel as described in the Bible is a complicated study and the actual borders have changed drastically over the 5,000-year history of the Jewish People in the land. In his interview, al-Ahmad repeated a trope frequently used by anti-Zionists to portray Zionism as having a regionally imperialist agenda. This concept of Israeli expansionism was even cited by Osama Bin Laden as one of the reasons for his terrorist war on the US, which he perceived as supporting this agenda.

In the Biblical context, the description of the borders of Israel as described in Genesis is referred to as Eretz Yisrael HaShlema (ארץ ישראל השלימה; the complete land of Israel) though it is usually translated inaccurately as ‘the Greater Israel” vision, implying an extremist political agenda.

Rabbi Yisrael Ariel has written several books and atlases widely recognized as authoritative on the subject of the Biblical and historical boundaries of Israel. He has also been criticized for views which his detractors claimed are dangerously extremist on the same subject.

“Israel is working to sign an accord with Kuwait,” Rabbi Yisrael stated, noting that the Torah warns against making deals with the inhabitants of the land.

You shall make no covenant with them and their gods. Exodus 23:32

“Kuwait is, in fact, included in the borders of the land promised to Abraham, which includes all the territory from the Euphrates to the Persian Gulf. There are regions that are unclear or debatable, but other areas are clearly part of this.”

“We are commanded by the Torah to settle in every area that God told us to dwell in,” Rabbi Ariel said. “It is certainly forbidden for us to relinquish land which is not ours to give away. In this regard, there is no difference between Tel Aviv, or Jerusalem, or any other land within these borders.”

Rabbi Hillel Weiss, the former spokesman for the Sanhedrin and the head of the Organization of the 70 Nations, acknowledges that Rabbi Ariel’s interpretation of the Biblically mandated borders of Israel was undoubtedly accurate while noting the implications were even more complicated. Rabbi Weiss prefaced his statements by emphasizing that it is forbidden to divide the land of Israel or to relinquish territories already under Jewish sovereignty.

“It is permitted, under certain circumstances and in specific manners, to make agreements with the inhabitants of these territories,” Rabbi Weiss said, citing the path endorsed by Rabbi Meir Kahane, the founder of the Kach political party. “Rabbi Kahane, who was considered far-right in matters of Israeli nationalism, based his policies on Biblical precedent. Before waging his campaign to conquer Israel, Joshua ben Nun sent letters to the inhabitants of the land, offering them three options: to come to amenable terms with the Children of Israel, to emigrate, or to engage in battle.”

“We are not required to be zealots and there are solutions,” Rabbi Weiss said. “In any case, before engaging in war there must be an attempt at peace making. This is certainly true in the case of the modern state of Israel and its current neighbors so long as it is not based on dividing the land currently under Israeli sovereignty.”

“Unfortunately, in the current political environment, the political mechanisms are not structured to encourage true peace between nations. The United Nations and European Union are focused on encouraging unjust and evil political agendas and it is not true of a politically correct vision of peace, which is no peace at all..”