Kickboxing Champion from Lost Tribe to Return to Israel on Aliyah 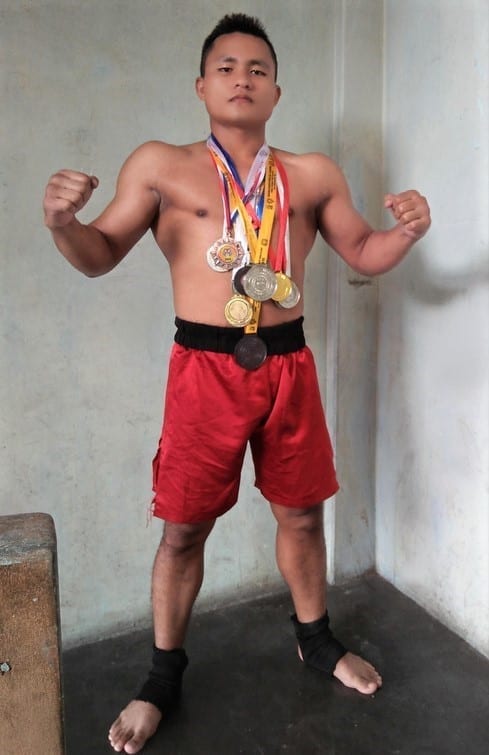 Hrangchal is religiously observant and a member of the Bnei Menashe Jewish community from northeastern India, descendants of one of the Ten Lost Tribes of Israel.

Together with his parents, Gabriel and Ruth Hrangchal, and sister, Lucy, he plans to arrive after the High Holidays. Obed and his family are heading to the city of Nof HaGalil, after they complete their absorption process in Shavei Israel’s absorption center in Kfar Hasidim.

“I have always dreamt of making aliyah to the Land of Israel, and I am very excited at the prospect of doing so. If possible, I would certainly like to join the Israel Defense Forces, and I would be honored to represent Israel in MMA and kickboxing competitions,” said Obed.

Obed Hrangchal displays some of his awards. Credit: Courtesy of Shavei Israel.
Originally from the village of Thinghlun in the Indian state of Mizoram, the Hrangchals were the only Jewish family in town. In 2013, they sold their home and farmlands to move to the capital city of Aizawl to join the local Jewish community while awaiting the opportunity to make aliyah.

Without the family farm, Obed’s father has been left without a profession. Being Jewish makes it more difficult to find steady work since they do not work on Shabbat and Jewish holidays.

While taking leave on these days, they often find that they are replaced.

Despite these difficulties, Obed has succeeded in garnering widespread recognition and has won awards in martial arts from the Mizoram State Sports Council and the Wushu KungFu Association of Mizoram, which are affiliated with the Indian Olympic Association, as well as the International Olympic Committee.

“I started practicing martial arts from a very young age, about 6 years old, but without proper instruction,” recounts Obed. “As I grew up, I steadily improved and then began to compete at the state level in 2014, when I competed in Chinese kickboxing or Wushu and won second place. That same year, I began to study MMA under an instructor.”

More than 4,000 Bnei Menashe have immigrated to Israel in the past two decades, largely due to Shavei Israel. Another 6,500 remain in India.

At a meeting in August, Israel’s Minister of Aliyah and Integration Penina Tamanu-Shata said that in cooperation with the Interior Ministry, she was moving ahead with the aliyah of 722 Bnei Menashe.