When Rabbis Should Not Keep Quiet

Home » When Rabbis Should Not Keep Quiet 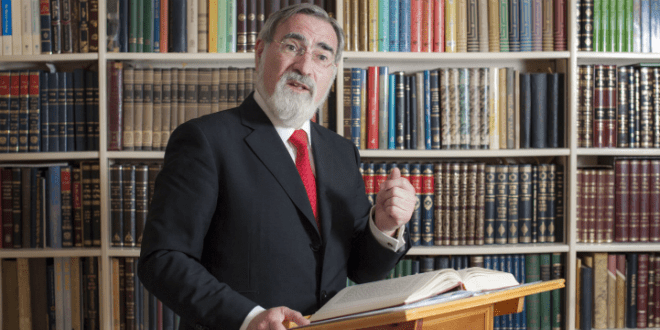 The former chief rabbi of the United Kingdom, Jonathan Sacks, has come in for some stick over remarks he recently made about religion and politics.

In an interview with JTA, he was asked what he thought about the observation by Rabbi Shmuel Kamenetsky, the head of the Agudath Israel Council of Torah Sages, that Jews should vote to re-elect President Donald Trump out of gratitude for the things he has done for the Jewish people.

Rabbi Lord Sacks, who was made an independent member of the House of Lords in 2009, delivered an impassioned reply. “The division between politics and religion is absolutely fundamental,” he said. “It’s one of the greatest things Judaism ever taught the world: Don’t mix religion and politics. You mix religion and politics, you get terrible politics and even worse religion. It’s an absolute and total outrage.”

As he said, he himself has written numerous books about political ideas. He has achieved justified global renown for his thinking about social, cultural and political trends. But as he also said, he has never taken a party political stand, never used his pulpit for a political address and never said how he votes.

He added: “And I’m afraid I did not allow my rabbis to use the pulpit for political purposes either. And I can see that that is not the case in America. And I’m afraid American Jewry is making a big, big, big mistake. This is not a small thing. It’s a very, very big thing.”

When he was the chief rabbi of the United Kingdom, Sacks drew some criticism from the Jewish community that he was politically timid. He always insisted, however, that rabbis had a duty to keep out of contentious political debate.

As he said in his recent interview, politics was inherently divisive while religion should be about bringing people together. In Israel, the mix of politics and religion was “a catastrophe and may one day threaten the very survival of the state.” As soon as religion became political, it, too, inevitably became divisive.

Trump is a deeply divisive figure, not least among Jews. Obviously, therefore, either saying anything or refusing to say anything about him will alienate one section of the community or the other.

There’s a difference, however, between these two camps. One is empirical, the other ideological.

Jewish pro-Trumpers—many of whom swallow their distaste at various aspects of his character and performance—are empirical. They support him on account of his specific policies over such matters as Iran, or Israel and the Palestinians.

Left-wing anti-Trumpers, on the other hand, are ideological. They frame everything Trump does as bad because his uncompromising repudiation of their worldview means that he is existentially bad and can do nothing that’s good. So to them, it’s a total outrage that any Jew could ever support him.

That’s why Ben Gould wrote in The Forward: “My fellow Jews: getting rid of Trump is a religious imperative.”

This eschatological view of the president is usually linked to the belief on the left that no Jew should support Israel’s policies on the Palestinians, or any action by Israeli Prime Minister Benjamin Netanyahu, or anything that contradicts left-wing cultural orthodoxies.

That’s why Peter Beinart wrote, also in The Forward, that his previous hero-worship of Sacks had now taken a hit. Despite Sacks’s unrivaled intellectual accomplishments as “the most acclaimed rabbi in the United States,” wrote Beinart, he had “not challenged a single action of either Benjamin Netanyahu or Donald Trump’s.”

There then followed a long litany of the alleged evil deeds of both the Trump and the Israeli governments that Sacks had unaccountably failed to criticize (migrants, settlements) along with evil deeds that he had unaccountably supported (war in Iraq, moving the U.S. embassy to Jerusalem).

Many American rabbis follow this doctrine. Last year, the leaders of all 12 institutions associated with the Union of Reform Judaism accused Trump of spreading hate, leveling the unsubstantiated and defamatory charge that he was associated with white supremacy and racism.

Such rabbis have bought into the whole package of identity politics, victim culture and intersectionality. These doctrines are all based on a repudiation of the core Jewish ethical principles of moral responsibility, resisting abuses of power and upholding truth against lies.

Yet such Jews tell themselves that these doctrines conform to Jewish ethical principles. In other words, these rabbis aren’t just Jews expressing political views. They have replaced Judaism by politics.

While rabbis should indeed avoid divisive political partisanship, they surely have a political duty to stand up for their own community if it is under threat. That’s why Rabbi Sacks’s successor as chief rabbi, Ephraim Mirvis, denounced the Labour Party’s previous leader, Jeremy Corbyn, for promoting anti-Semitism.

America’s wartime rabbinic leader, Stephen Wise, was a baleful example of a rabbi who failed to fulfil this duty.

As Rafael Medoff observes in his devastating book, The Jews Should Keep Quiet, Wise allowed himself to be so compromised by his friendship with President Franklin D. Roosevelt that in the early 1940s, he suppressed any disclosure of Roosevelt’s apparent indifference to the fate of the Jews in Nazi Europe and his refusal to allow desperate Jewish refugees into America.

Instead, Wise sanitized Roosevelt’s policy, allowed no public criticism of the president and tried to undermine those who were desperately trying to sound the alarm about the Holocaust.

In order to stifle Jewish criticism of Roosevelt’s appeasement of Nazi Germany and his refusal to rescue large numbers of European Jews, the president exploited and manipulated Wise “to help ensure that the Jews would keep quiet.”

Rabbis surely have a duty to speak up against any danger that threatens either the Jewish community or the fundamental precepts of civilized life. What’s crucial, however, is that they make a correct judgment-call on such matters—one that accurately reflects Jewish ethical principles of truth and justice.

While it may well be unwise for rabbis to speak in favor of Trump, it’s therefore wrong for them not to speak out against the threat posed by the Democrats’ lurch into far-left policies that threaten both Jews and the core values of the West.

The tragedy is that so many American rabbis and other Jews—making the wrong judgment-call that the greatest danger comes not from the enemies of the Jewish people and the West but from their true defenders—not only keep quiet, but actually support the enemies of civilization.