9-11: Israel and the US Joined in Blood Against Evil

You will listen to the entreaty of the lowly, Hashem, You will make their hearts firm; You will incline Your ear to Champion the orphan and the downtrodden, that men who are of the earth tyrannize no more.

Home » 9-11: Israel and the US Joined in Blood Against Evil 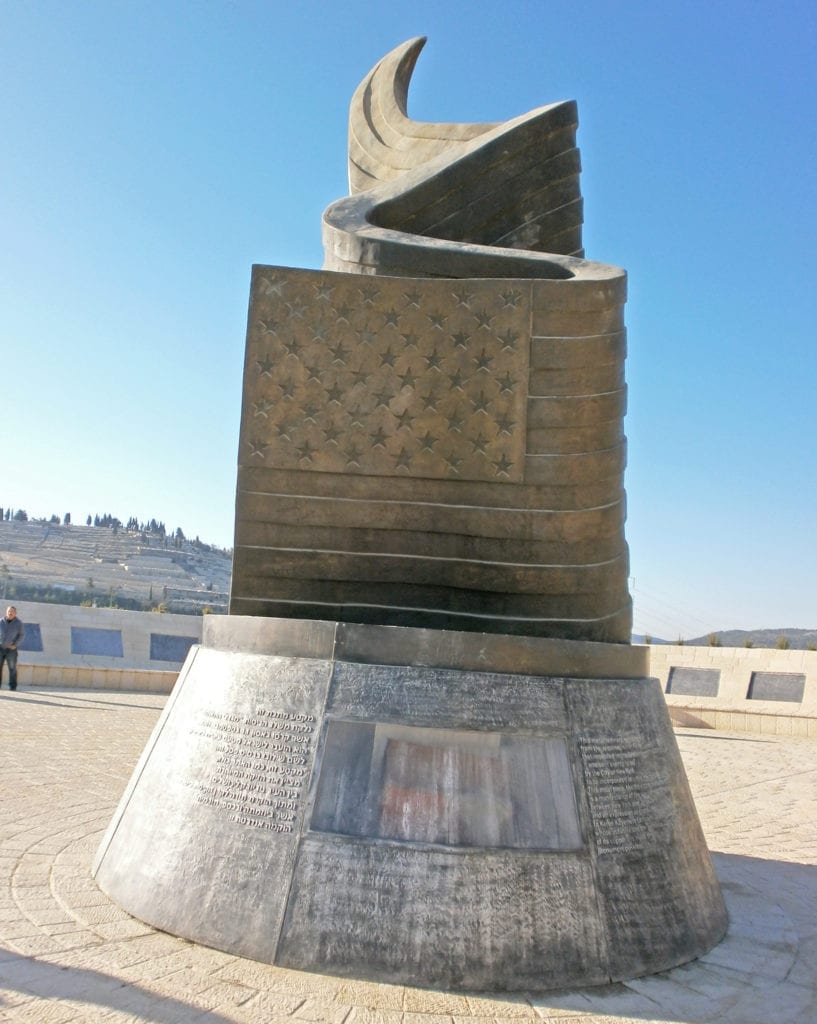 Though 9-11 memorials are found in several countries around the world, the tiny country of Israel has 13 memorials, the most of any country outside the U.S. And significantly, the 30-foot-tall 9/11 Living Memorial Plaza in Ramot, Jerusalem is the only memorial outside of the United States that lists all the names of the victims, including five who were Israeli citizens. A small part of New York City, a metal shard from the ruins of theWorld Trade Center, is embedded in the base. The creation of this monument was not mere symbolism. It was an act full of meaning. In a world in which the powers of darkness do not hesitate to perform horrifying acts of violence that have, until now, been rejected by even the most twisted of human spirits, 9-11 is a bond of blood that is the US-Israeli brotherhood fighting the evil forces that threaten to plunge all of humanity into darkness.

Following the 2018 Pittsburgh synagogue shooting, the Jewish National Fund and JNF-USA erected a stone plaque listing the names of the 11 victims of that attack next to the 9/11 Living Memorial Plaza. The attack was a graphic reminder that the same evil that targets Israel also targets the U.S. Osama Bin Laden, the head of al Qaeda, stated that one of the main motivations for the attacks was U.S support for Israel. And terrorism in Israel reflected this connection with a spike in terrorist attacks. In 2001-2002, over 250 terrorist attacks in Israel killed 659 Israelis and injured over 3,800. Many of the victims were U.S. citizens.

On September 11, 2001, 19 terrorists from Islamic al-Qaeda, armed with box-cutters, hijacked four passenger airliners, using them to carry out a series of four coordinated terrorist attacks, . flying two of the planes into the two towers of the World Trade Center and a third plane into the Pentagon. The attacks killed 2,977 people and wounding over 25,000, making 9/11 the single deadliest terrorist attack in human history.

The number one motive Al Qaeda gave for the attack: US support for Israel.

After much political strong-arming, President Barack Obama succeeded in signing into law the Joint Comprehensive Plan of Action (JCPOA), known commonly as the Iran nuclear. Prime Minister Netanyahu jeopardized relations with the US by speaking before Congress before the presentation of the JCPOA for approval.

The agreement was horrifying in its conception since Iranian complicity in the 9-11 terror event was well-documented. US investigators who compiled the 2004 9/11 Commission Report wrote their suspicions that the Iranian government knowingly facilitated the passage of al-Qaeda members who later carried out the terrorist attacks, allowing the would-be terrorists to conceal their origins to US immigration officials.

This was confirmed by the Iranian government in 2018 when Mohammad-Javad Larijani, the international affairs assistant in the Iranian judiciary, said in an interview that his government had helped the terrorists with their travel and travel documents. It hasw since been confirmed that Iran regularly cooperates and aids al Qaed and Hezbollah.

Following the 2018 Pittsburgh synagogue shooting, the Jewish National Fund and JNF-USA erected a stone plaque listing the names of the 11 victims of that attack next to the 9/11 Living Memorial Plaza.

One victim of Palestinian terrorism who was killed in Israel was a Christian military veteran from Texas named Taylor Force. He was stabbed to death on a Tel Aviv beach by a Palestinian terrorist in 2016. Because the killer died while committing an act of terrorism, the killer’s relatives are paid a monthly pension equal to several times the average monthly Palestinian wage. The Taylor Force Act was introduced to Congress and initially encountered partisan difficulties with the Democrats opposing the bill. It was passed in 2018, ending American aid to the Palestinian Authority unless the PA stopped paying stipends to the terrorists and their families, including the families of successful suicide bombers.

9-11 AS INSPIRATION FOR MORE ATTACKS

On the anniversary of 9-11 in 2019, Al-Sahab, the media arm of Al-Qaeda, released a video in which the group’s leader, Ayman al-Zawahiri, urged attacks against Israeli, US, European and Russian interests worldwide. The main target of their ire was President Trump who they hated for moving the US Embassy to Jerusalem. In his call to violence, al Zawahiri cursed Trump as a Zionist, claiming that the majority of Zionists throughout history have been non-Jews, listing Napoleon Bonaparte, Arthur Balfour, Mark Sykes and President Trump as examples of “non-Jew Zionists.” According to al-Zawahiri, “These Zionists plot against Muslims everywhere and immigrate to Israel from all over the world; therefore, it is necessary to take the battle to them everywhere.”

Just nine days after al-Zawahiri called for attacks, US authorities announced the arrest of a New Jersey man for allegedly scouting dozens of targets for Hezbollah. The man was a naturalized citizen who came to the U.S. from Lebanon.

It may be that al Qaeda is planning future generations of terrorists to attack the US. It was rumored in 2018 that Hamza Bin Laden, the son of notorious al-Qaeda head Osama Bin Laden, married the daughter of Mohamed Atta, one of the ringleaders of the 9-11 attacks.

A BIBLICALLY ROOTED COVENANT OF SUFFERING

It is interesting to note that 9-11, the eleventh day of the ninth month, has a counterpart in Israel. Like most Europeans, Israelis write the date with the day preceding the month, so September 11th is written 11-9. On the Hebrew calendar, 11-9, or the ninth day of the eleventh month, is Tisha b’Av, the ninth of Av, a day of fasting in which Jews commemorate the destruction of our “Twin Towers”: the First and Second Temples.

Rabbi Tuly Weisz, the founder of Israel 365, noted that this Israel-US bond of brotherhood inspires him to work even harder to support Israel in times of dire need.

“September 11th is a difficult day,” he shares. “On this day, we remember the thousands of Americans who were murdered by radical Islamic terrorists. We pray for the victims and their families”.

“Unfortunately, here in Israel, terrorism is all too familiar. Terror attacks and attempted terror attacks are daily occurrences. Israelis live in constant fear of suicide bombings, car-rammings, rockets, stabbing attacks, shootings, and arson terrorism. Despite the dark reality, the Children of Israel are committed to living in their land in the fulfillment of God’s word:

“On that day Hashem made a covenant with Avram, saying, “To your offspring, I assign this land, from the river of Egypt to the great river, the river Euphrates.” Genesis 15:18

“This year, just as in every year since the establishment of the State of Israel, more Israelis were murdered by terrorists.”

Today we mourn and remember all those who we have lost to senseless acts of terrorism. We look after and care for those who live on.  As lovers of God, and the Bible, we must follow His command and care for His children, as it is written:

“You will listen to the entreaty of the lowly, Hashem…to Champion the orphan and the downtrodden, that men who are of the earth tyrannize no more.” Psalms 10:17-18

Rabbi Pinchas Winston, an American rabbi living in Israel who is a prolific end-of-days author, described how 9-11 essentially changed the U.S. and its relationship with Israel.

“Up until 9-11, the sympathy in the U.S. regarding terrorist attacks was superficial. Terrorism was 6,000 miles away for most Americans. 9-11 brought Israel to the shores of America. Home Front security suddenly became a very real concern, changing the structure of daily life. Neither Jews nor non-Jews could hide from the enemy that was attacking Israeli citizens.”

The rabbi emphasized that this was a bitter lesson in humility for the most powerful nation in the world.

“It opened up Americans’ eyes to the fact that the unbelievable things that happened in other countries, including terror and despotic leaders, could happen in downtown USA. The foundations of the country shifted.”

This transformed the relationship between the U.S. and Israel.

“Rather than look at Israel with sympathy, America looked to Israel for solutions, to learn how we coped. We became true allies,” Rabbi Winston said. “Israel is a partner with God in geula (redemption) and just like the nations brought sacrifices to the temple, America can be a partner with Israel in redemption.”

Rabbi Winston noted that the “dark side” blamed Israel for 9-11, either through absurd conspiracies or by accepting Osama Bin Laden’s claim that the attacks came as punishment for U.S. support of Israel.

“This led to an equal rise in support for the Palestinians,” Rabbi Winston noted, pointing to 9-11 as a point at which Americans were pushed to choose sides.

But choosing sides has Biblical implications, the rabbi noted.

“Even more than any military cooperation or connection via the American jews, 9-11 was a covenant in suffering that indelibly joined the U.S. to Israel,” Rabbi Winston said. “But a covenant can only be made intentionally. It includes the Americans who choose to join Israel.”