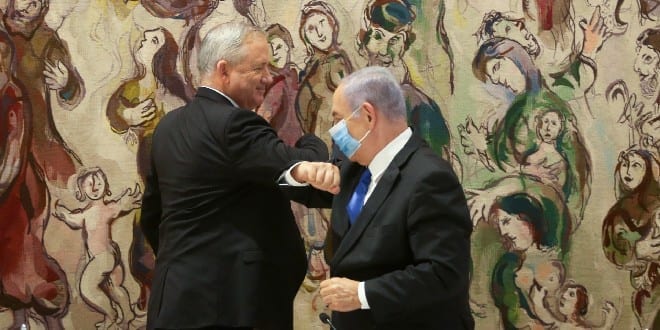 The purpose of the event, after which only Netanyahu responded to reporters’ questions, was pretty clear: to display a unified front in what has begun to seem like a circus of contradictory COVID-19 rules and a losing battle against the spread of the virus.

The discrepancy between the Jewish state’s stellar record during the first wave and its current failing grade—listed earlier this week by John Hopkins University as having the world’s highest rate of new infections per day per million people—is only part of the reason that Netanyahu, Gantz, Edelstein and Gamzu each took to the podium to make a statement.

The greater impetus was the recent confusion surrounding the government’s latest conflicting announcements on how it intends to tackle the worrisome infection rates and rising death toll. On Thursday, the coronavirus cabinet decided to impose a general seven-day lockdown on some 30 of the country’s “red” towns and cities—those with the highest morbidity rates—in accordance with Gamzu’s color-coding “traffic light” model, which was to go into effect on Sunday.

The cabinet determined that the week-long lockdown on the yet-to-be-finalized areas would be extended if necessary. By Sunday night, however, two things happened.

The first was that the number of “red” cities was increased to 40. The second was that the haredi (ultra-Orthodox) parties, realizing that their population was going to be hard-hit by the lockdown, railed against Netanyahu.

Then, after hours of the infighting that has come to be typical of coronavirus cabinet meetings, the Prime Minister’s Office and Health Ministry announced an adjusted policy. Rather than a full lockdown, the “red” zones would be subjected to a nightly curfew, to be in force from 7 p.m. until 5 a.m. the following morning. In addition, gatherings in these areas would be strictly limited, and all schools, other than special-education institutions, would be closed.

The government said the plan would go into effect on Monday evening—without specifying which towns would be targeted.

Then came Monday, and with it, another round of meetings. These resulted in a declaration that the night curfews would begin only on Tuesday night. Again, no list of cities was released, but Israelis in areas designated as “red” on the Home Front Command’s National Emergency Portal began to get agitated. Among these were Arab villagers and hoteliers in Tiberias, all justifiably panicked about being forced to shut down their businesses for a second time since March.

Even after Monday night’s press conference, just as many questions remained unanswered as before—particularly as medical professionals continued to argue that the measures about to be taken were “too little, too late.”

Nor did it help matters when Yisrael Beiteinu Party leader Avigdor Lieberman told the public to rely on “common sense” in safeguarding its health, rather than listen to the government, which he accused of putting political considerations (i.e., staying in power by keeping the coalition intact) ahead of scientific ones.

Chaos doesn’t begin to describe the atmosphere, which pundits keep insisting is due to a “lack of public faith” in the government’s handling of the coronavirus crisis. But the truth, like the Israeli psyche, is more complicated than that.

Taking issue with the powers-that-be is nothing new in Israel. In fact, it is so commonplace that’s it’s barely worth mentioning, certainly in this context. No, it’s not an absence of belief in Netanyahu or Gamzu that’s causing Israelis to reject, forget or shrug at the health regulations. The culprit, rather, is a waning fear of the virus itself.

Ironically, when the death toll was negligible, there was a sense of anxiety in the air that COVID-19 was lurking on every surface, hovering in the air, waiting to pounce. After months of mask-wearing and temperature-taking, most Israelis have developed herd immunity to the panic.

Gone is the refrain: “We’re all in this together.” In its place is a new mantra: “Why are only some sectors allowed the privilege of congregating in close quarters?”

The haredim, for example, see the tens of thousands of anti-Netanyahu protesters swarming the streets surrounding the Prime Minister’s Residence in Jerusalem every Saturday night and ask—rightly—why a wedding in Bnei Brak with 500 guests is considered a more dangerous coronavirus Petri dish. Ditto for Israel’s Arabs, who have been warned that their banquet-hall celebrations are microbe-infested.

The reason they are given is that there is no epidemiological evidence suggesting a link between the spread of COVID-19 and the demonstrations. This is laughable, of course, since it turns out that the protesters have been switching their cellphones to “airplane mode,” making it impossible to trace their chain of infection.

Meanwhile, the protesters and other citizens attack the Breslov Chassidim for demanding the right to make their annual pilgrimage to Ukraine to visit the grave of Rabbi Nachman of Uman.

Yes, every pot is calling each kettle black, and the whole populace is bemoaning the unfairness of it all. The possibility of contracting the disease doesn’t enter the discussion.

The sad fact is that unless hospitals start collapsing from the burden of critically ill and dying patients, public apathy will grow. And without a nationwide lockdown that includes the banning of all mass events equally—even the “democratic” anti-Netanyahu demonstrations—Israelis will have a difficult time not yawning behind the masks that most have been wearing to avoid a NIS 500 ($148) fine.

Netanyahu, Gantz, Edelstein and Gamzu are well-aware of this societal situation; it may be the only thing on which they are in complete agreement. Their press conference, then, could have been simply a precursor to the blow that they’ll be dealing with all colors of the “traffic light” next week in preparation for the upcoming Jewish High Holidays.