When Hashem is pleased with a man’s conduct, He may turn even his enemies into allies.” 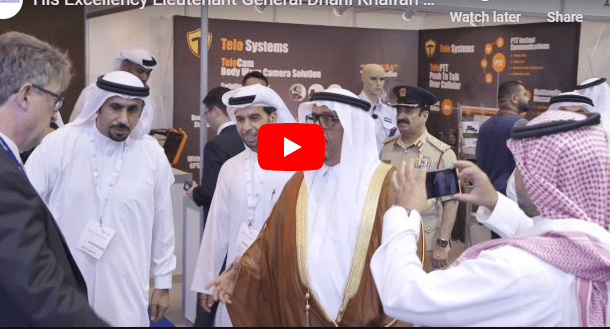 The police chief of Dubai is volatile; once ordering the arrest of Israel’s prime minister, the UAE head-cop is now focusing his anger on the Palestinian Authority for standing in the way of the peace agreement. But the chief’s Biblical name, Tamim, points at his possible role in the end-of-days repentance that will reconcile Isaac and Ishmael.

Lt. Gen. Dhahi Khalfan Tamim has been Dubai’s chief of police since 1970. As such, he was in charge of the investigation into the 2010 assassination in Dubai of Mahmoud al-Mabhouh, a cofounder of the military wing of Hamas. Mabdouh was killed in a Dubai hotel room by what was reported to be a hit team of 26 suspects using stolen or forged passports, including some belonging to Israeli dual citizens. In addition to arresting 29 people, an Australia news website reported that Tamim said, “I am now completely sure that it was Mossad” and claimed he had instructed Dubai authorities to arrest Netanyahu and Mossad chief Meir Dagan.

He doubled down on this anti-Israel stance later that year when he stated that “anyone who looks or sounds like a citizen of Israel will be blocked from entering the country, even if a suspected individual produces a passport of a different state.”

Though he earned accolades from the anti-Israel Arabs (and non-Arabs), in 2013, Tamim received criticism for contesting the notion that Israel was the enemy of Arabs by declaring that the Muslim Brotherhood posed a significantly more substantial threat.

His pro-Israel inclinations surfaced again in 2011 when he stated that he would not hesitate to alert Israeli authorities if he learned of a planned terrorist attack on their soil.

In an interview on Al Jazeera, he told a reporter, “Rest assured: If I know that a bomb is going to go off on a street in Israel, I’ll take the same security measures to protect the safety of a Jewish person as I’d do for someone anywhere in the land of Islam.”

These statements earned him the title of ‘traitor’ and ‘Zionist collaborator’ with many of his compatriots calling for his death.

In another turnaround, in 2012 he tweeted his hatred for then-president Shimon Peres, accusing him of having “killed thousands of innocent Palestinians.” And in 2013, Tamim expressed support for a conspiracy theory accusing Jews of using the Muslim Brotherhood to control Muslims and establishing a greater Israel.

Yet again, he flipped, criticizing Qatar-supported Hamas in 2014 for firing rockets into Israel. This pro-Israel change of heart carried over into 2016 when he went on a Twitter rant, urging his followers not to “treat Jews as enemies.”

“America is trying to get closer to Israel…the entire world is…Rapprochement will solve problems. Why shouldn’t we have a coalition with the Jews against the enemies of the Middle East,” wrote Tamim on Twitter. In another tweet, Tamim accused the Iranian leader Ayatollah Ali Khamenei of “trading in the Palestinian cause.”

One year later he went on record criticizing Qatar’s policy of acting as a safe haven for the Muslim Brotherhood. After hundreds of civilians were killed in the 2017 Sinai mosque attack by ISIS, he blamed the attack on Qatari news network Al Jazeera and suggested that Egypt should “bomb” the network in retaliation. This realistic approach to dealing with Islamist extremism even brought him to praise President Trump’s 2107 ban on individuals from seven Muslim-majority countries.

It is unclear whether his attitude towards Israel is driven by pragmatism, current events, or a shifting ideology. In any case, his pro-Israel stance is enhanced by the recent normalization agreement signed between the UAE and Israel.

Tamim has been very critical of the PA rejection of the UAE-Israel agreement and on Monday tweeted: “Remove from your heads the idea that you do not establish relations with Israel except by order of Mahmoud Abbas.”

When the boys grew up, Esau became a skillful hunter, a man of the outdoors; but Yaakov was a mild man who stayed in camp. Genesis 25:27

The Hebrew word, tam (תם), translated here as “mild”, is actually quite ambiguous and has many divergent meanings. It is also translated as whole or unblemished. As a character description, it means innocent, sincere, or simple. Noah is described as righteous and tamim in his generation (Genesis 6:9). The Torah commands us to be tamim with God, (Deuteronomy 18:13).

“This ‘sincere and unblemished’ son of Ishmael might be Ishmael repenting,” Rabbi Berger said, citing a Jewish tradition that Ishmael, the father of the Arab nations, repented after the death of his father, Abraham. This is based on a verse in Genesis.

His sons Yitzchak and Ishmael buried him in the cave of Machpelah, in the field of Ephron son of Zohar the Hittite, facing Mamre Genesis 25:9

The medieval commentator Rashi explained that in this verse, Ishmael should have come first since he is older. Rashi interpreted the incongruity in the verse to mean that Ishmael repented in his later years. Realizing the spiritual superiority of Isaac, Ishmael displayed this by allowing him to go first when burying their father.

“The question is in intention: is this phenomenon in the Arab world a wave of repentance that will bring about peace between Jacob and Ishmael or is this just a sly plot based on temporary vested interest?” Rabbi Berger asked. “Only time will tell. And there is not much time left.”

Rabbi Berger emphasized that the Coronavirus pandemic is affecting the nature of current events.

“This plague was clearly sent by God,” Rabbi Berger emphasized. “Not only is it a thing unto itself, but it is affecting everything that happens and everything people do. The good gets better and the bad is made even worse. There were riots in the streets of America a few years ago but not so bad. And now, if one Arab leader has a small intention to make peace with the Children of Israel, that idea can catch fire and take over the entire Middle East, maybe even the entire world.”