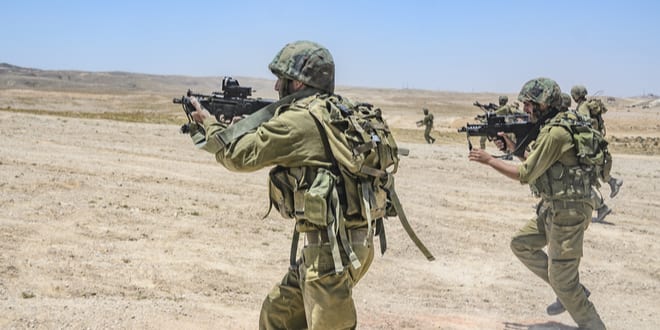 Under the cover of darkness in southern Israel, dozens of rockets pierced the night sky, flying out of their launch pods before exploding into targets some located dozens of kilometers away. The specialized drill—dubbed an “operational model” by the Israel Defense Forces’ Artillery Corps—was the peak point of a long process of improvement undertaken by Battalion 334, which is equipped with Romach (Hebrew for “spear”) rockets.

The rockets, made by Elbit Systems and which are known in English as Accular, are satellite-guided munitions designed to support ground forces. They are specially designed for urban warfare due to their rapid responsiveness.

According to the Elbit website, “Accular can neutralize targets to a range of up to 40 kilometers and is especially required in areas where the use of traditional artillery is limited by terrain, distance and accuracy.”

Lt. Col. Or Levy, commander of the 334th Battalion, served his entire IDF service in the battalion, including during the 2006 Second Lebanon War.

“We are looking to the future, and the Romach is a part of this future,” Levy told JNS.

The Romach rockets are designed to destroy artillery targets on the modern battlefield with minimum collateral damage and are 10 times more effective than a standard explosive shell, delivering an accuracy hit within a radius of under 10 meters.

The 334th Battalion is equipped with a Multiple Launch Rocket System (MLRS), which is a vehicle-mounted launcher that can fire many rockets in succession.

“We practiced a range of attack possibilities, from minimum to maximum range, testing the rocket’s ability and simulating a variety of targets,” explained Levy. Different techniques were drilled, including firing simultaneously on multiple targets. “We understand that at the end of the day, in the next war or day of battle, we will be prepared for all such scenarios. This is what the operational model was made for.”

The battalion commander described the drill as a success, saying “we fired dozens of rockets and saw incredible results.”

‘Precise fire to the maneuvering force’

The night drill is part of the battalion’s daily training regiment, in which it aims to become “more accurate and more lethal,” added the officer. “Here, we inserted the things we’ve been working on to the edge.”

Other units took part, including the 611 location battalion (equipped with radars), and the Sky Rider drone unit. “With this synergy, we practiced linking the sensors to the shooters in the best way that this can be done—with radars and with the Sky Rider drone that sees targets. All of these played a part throughout the night,” said Levy.

In recent years, the IDF Artillery Corps has been undergoing significant changes, and its brigades are becoming more independent, gaining the ability to detect and accurately strike targets, as well as gaining responsibility for entire areas.

The goal is to optimize the assistance they provide to maneuvering forces up ahead. “My job is to bring precise fire to the maneuvering force to the right place and in line with their requirements,” said Levy.

While the artillery shell has its own role to play, Battalion 334 can hit structures with accurate rockets and work with target coordinates that are far more precise than standard GPS coordinates.

Now, the battalion is working with industry to upgrade the Romach rockets in line with battlefield changes, which are “occurring before our eyes,” said Levy. “The Romach is only part of the process of accurate rockets.”

The Romach rocket has been operational in the IDF since the end of 2014. Next year, a new guided rocket will enter service as part of this process. And within four years, the entire battalion will be activating its firepower from trucks, making it faster and more flexible.

Still, Levy stressed that it’s the personnel operating the weaponry who make the most difference. “With all our love for technology and the accuracy of the rockets, in the end, there are people who operate this. We have male and female personnel filled with motivation, who came to work. And without their dedicated work, this wouldn’t look the way it does,” he said. “They are the ones bringing the rockets to the targets. We have strong people serving in a strong battalion, in a strong Artillery Corps that can hit the enemy at any time and with precision.”

‘The core of the model’

Lt. Col. Ran Kotek, head of Rockets and Radars Department at the Artillery Branch, said that the corps shifting into directions that will be more relevant to the 21st-century battlefield. Kotek, who is responsible for the Artillery Corps’ development, described a deep process of upgrades that begins with how the IDF views itself in relation to evolving challenges and ends with the precision rocket battalion’s abilities.

“We held a long process of training and trials with the rockets, and we decided to challenge the system’s readiness for all sorts of scenarios. That was the core of the model,” said Kotek.

The needs of field units maneuvering in enemy territory are ultimately “our compass,” he added. “We as the Artillery Corps will provide them with the right solution and the most suitable responses. Our understanding is that due to developments in recent years, we have to be much more accurate, and we have to have much more precise firepower.”

Vanishing enemies like Hezbollah and Hamas are not resting on their laurels, meaning that the Artillery Corps is looking at trends and setting goals for the next five to seven years. “The rockets are part of these processes,” said Kotek.

During the drill, personnel practiced detecting targets from drones and then sending the coordinates as quickly as possible to the launch battery. Ways of improving this speed were tested out.

“Creating a mass of firepower simultaneously—that’s a challenge. That’s what we are working on in this kind of model,” said Kotek. “We must have a common language and dialogue among personnel serving at the edge. This demands in-depth training and drills, and thinking about ways to improve.”

Looking ahead, Kotek said that weapons that will soon be introduced will be “far more accurate and far more lethal. The scope of destruction will grow. The time it takes to connect sensors to shooters will decrease.”

At the same time, decreasing collateral damage is vital, he stressed. That’s because the Artillery Corps wants to reduce harm to noncombatants and to be able to provide fire support as closely as possible to the IDF’s field units without endangering them.

The corps is working with defense industries to “take us to a place that only the imagination can conjure,” said Kotel. “We are taking giant steps in this direction.”