Yehoshua son of Nun summoned the Kohanim and said to them, “Take up the Aron HaBrit, and let seven Kohanim carrying seven shofarot precede the Aron of Hashem.” 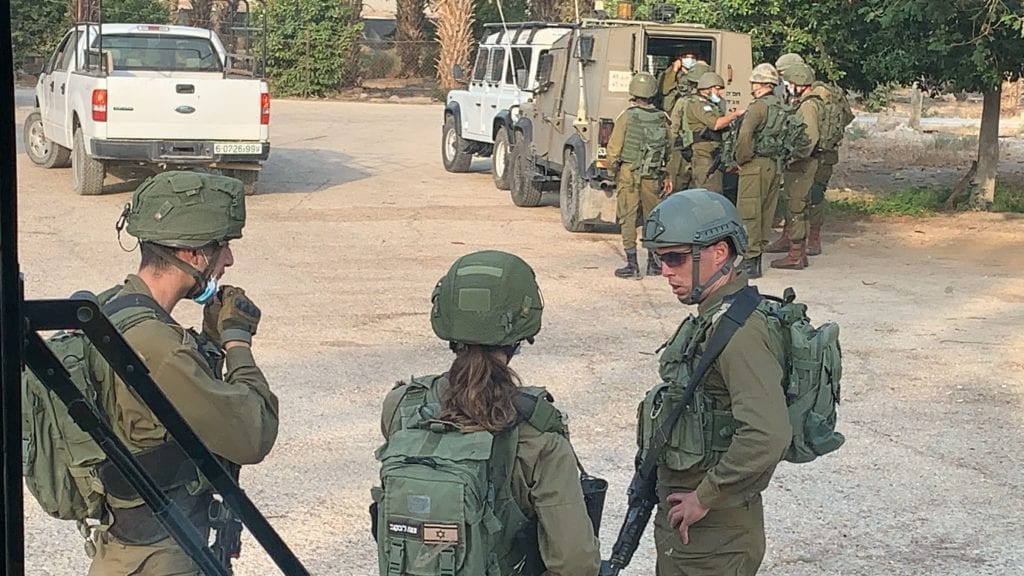 In a modern-day incarnation of Biblical events, Joshua entered Jericho on Friday morning, surrounded by IDF troops, blowing shofar while the enemy soldiers fled without firing a shot. The doors were broken open and once again, the keys to the ancient synagogue at the gateway to the Holy Land were in Jewish hands.

On Friday morning, an IDF convoy of six vehicles carrying about 30 combat troops entered Jericho from the east, retracing the route Joshua took after the Exodus from Egypt. Their objective was the Shalom Al Yisrael Synagogue in the heart of Palestinian controlled territory but the real weapons were in the armored bus in the center of the convoy: ten Jews carrying the requisite number of rams’ horns.

Israel 365 news correspondent Joshua Wander was with the convoy as they entered the city. Wander has visited Jericho several times but he immediately noted that this visit was different.

The destination was the Shalom Israel Synagogue deep in the heart of territory currently under the control of the Palestinian Authority. When the convoy arrived, the PA soldiers stationed at the synagogue packed up their weapons and fled.

“I don’t know why but this was the first time the entrance into Jericho was not coordinated with the Palestinian Authority,” Wander said. “The guards, Palestinian police, were clearly not expecting us. When they saw us, they picked up their bags and left in a hurry.”

The lower section containing the ancient mosaics had been locked and chained but the IDF made quick work, removing the locks and replacing them with new locks.

“I don’t think people realize how important this was,” Wander said. “Changing the locks was taking back the Jewish sovereignty over the ancient synagogue. This was a clear and unmistakable signal to the PA that control of the city was in Israeli hands.”

“After conquering Jericho, Joshua built the walls back up,” Wander said. “That is what we need to do now: The time for discussion is over and it is time for construction.”

The group prayed the morning prayers. At the conclusion of the prayers, the shofar was blown as is customary in the month of Elul leading up to Rosh Hashanna.

Rabbi Yehudah Glick, a former Likud Knesset Member and head of the Shalom Jerusalem Foundation, was part of the group.

According to tradition, the Shalom Al Yisrael Synagogue, (lit. “Peace Upon Israel Synagogue”) is located precisely where God told Joshua to remove his shoes because he was standing on a holy site. The mosaics date to the late 6th or early 7th century CE and were discovered in Jericho in 1936. The synagogue, dating from the Byzantine period, was revealed in excavations conducted in 1936 under the British Mandate. An Arab family built a house over the mosaic floor and charged admission to visit it. The mosaic floor incorporates Jewish symbols such as the Ark of the Covenant, the Menorah, the Shofar, and the Lulav. There is also a Hebrew inscription, “Peace upon Israel” (שלום על ישראל), after which the mosaic was named.

After the 1967 Six-Day War, the site came under Israeli military control and remained under the administrative responsibility of the owners (the Shahwan family). Tourists and Jews began visiting the site regularly for prayers. In 1987, the Israeli authorities confiscated the mosaic, the house and a small part of the farm around it. They offered compensation to the Shahwan family but that was rejected. Following the Oslo Accords, the site was given to the Palestinian Authority (PA). Since then the PA has deployed a special security force to protect it.