Does a Wave of Sinkholes in Russia Presage the Reappearance of Korach?

They went down alive into Sheol, with all that belonged to them; the earth closed over them and they vanished from the midst of the congregation,”

Home » Does a Wave of Sinkholes in Russia Presage the Reappearance of Korach? 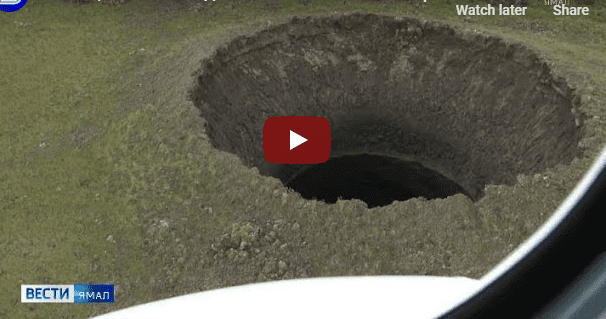 An entire region of Russia is in danger of being swallowed by a wave of massive sinkholes but some see that implicit in this specific tragedy is the construction of the Third Temple and the pre-Messiah reappearance of Biblical Korach.

A new sinkhole, the 17th and largest to form since the phenomenon was first observed in 2014, opened up last week in the Yamal Peninsula. The depth of the new hole was determined to be 164 feet. When the first sinkhole appeared, experts suggested several possible causes including a subterranean explosion, an impact by a meteorite or a UFO, or the collapse of an underground gas facility. These theories were dismissed and  Andrei Plekhanov, in remarks to the Associated Press, to be likely the result of a “buildup of excessive pressure” underground because of warming regional temperatures in that portion of Siberia. Tests conducted by Plekhanov’s team showed unusually high concentrations of methane near the bottom of the sinkhole. Researchers told RIA Novosti that they discovered several small hills on the two Arctic peninsulas which they believe could be “gas bubbles” ready to burst.

In 2017, one such sinkhole suddenly opened with a bang, its arrival marked by flaring flames and a column of smoke. The Yamal Peninsula covers a more than 700 km long area between the Gulf of Ob and the Kara Sea and is among Russia’s least populated regions. It holds Russia’s biggest natural gas reserves.

Several hundred sinkholes of varying sizes appear every year in the US, with Florida being especially susceptible. Caused by underground erosion, they can go undetected for years until the ground suddenly collapses. The condition might be from entirely natural causes but are exacerbated by manmade conditions.

In one week in August 2016, sinkholes opened up in Brisbane Australia, Zhengzhou China, and Albany New York. At least one person was swallowed up by the sinkhole in China.

In 2013, a sinkhole measuring  30 feet across and 30 feet deep opened up suddenly under a house in Tampa, Florida swallowing up the bedroom of Jeff Blush as he slept. In one fateful week in 2016, three major sinkholes appeared, resulting in at least one death.

Randall Orndorff, Director of the Eastern Geology and Paleoclimate Science Center for the U.S. Geological Survey, said in an interview with Accuweather in 2013 that sinkholes are becoming more, common, or at the very least, more common in populated areas.

“We have no hard evidence to say for sure that sinkholes are occurring more than they have in the past,” noted Orndoff. “However, since human influences such as paving and building in sinkhole-prone areas has increased, it probably follows that we are seeing them more often.”

Visions of the earth suddenly opening up and swallowing evil-doers epitomizes the Biblical concept of divine retribution. This was seen most clearly in the case of Korach and his rebellious crowd.

And the earth opened her mouth and swallowed them up, and their households, and all the men that appertained unto Korach, and all their goods. Numbers 16:32

According to Jewish tradition, Korach and his followers did not die after being swallowed up by the earth and remain alive, awaiting the end of days when they will resurface. A Midrash related by the Talmudic commentary called Tosafot (Kiddushin 31B) describes how this is connected to the appearance of the Third Temple. The Tosafot asks why Psalm 82 is described as a  ‘Mizmor’, a joyous song,  when it’s the subject matter is the tragedies accompany the destruction of the Temple.  The Tosafot explain that Asaf, a descendant of Korach, saw the salvation of his ancestor in the destruction of the Temple and Israel.

It is compared to a maidservant who went to draw water from the well and whose pitcher fell into the well. She became distraught and began to cry – until the king’s maidservant came to draw water carrying a golden pitcher, and it too, fell into the well. At which point the first maidservant began to sing. ‘Till now’, she exclaimed, I didn’t think that anybody would retrieve my cheap earthenware pitcher from the well. But now, whoever retrieves the golden pitcher, will retrieve mine as well!’ In the same way, when the sons of Korach, who were swallowed up inside the earth, saw how the gates of the Temple sunk into the ground, proclaimed ‘Whoever rescues the gates will also rescue us!’ That explains why Asaf, who was from the family of Korach, said ‘Mizmor.’