Guy who thinks ‘Palestinians’ are Canaanites to Teach Diplomacy at Harvard

“The fear of Hashem is the beginning of knowledge; Fools despise wisdom and discipline.” 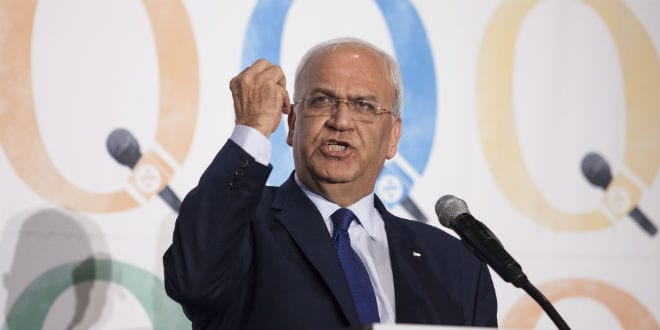 A prestigious program at Harvard University will have the Palestinian’s chief negotiator, a man who has rejected a Palestinian state at least twice, teaching a graduate program in negotiation.

The Future of Diplomacy Project at Harvard Kennedy School’s Belfer Center for Science and International Affairs recently named four fellows to teach virtual seminars in the upcoming semester. Erekat will be teaching about the Israeli-Palestinian conflict, conflict resolution, and negotiations. The chief negotiator for the Palestinian Authority, Erekat personifies the axiom stated by Israeli Abba Eban  after the Geneva peace talks in 1973 when he said, “The Arabs never miss an opportunity to miss an opportunity.”

As a fellow in the program, Erekat will speak in virtual seminars in the autumn, hold office hours with students to help foster their professional development and networks, and participate in research initiatives. Public health conditions permitting, the Fellows will visit campus in spring 2021 to lead study groups for Harvard students on the Israeli-Palestinian conflict, listed as his topic of expertise.

At a Munich Security Conference in 2014, Erekat claimed: “I am the son of Jericho. I am 10,000 years old … I am the proud son of the Netufians and the Canaanites. I’ve been there for 5,500 years before Joshua Bin Nun came and burned my hometown Jericho. I’m not going to change my narrative,” he said.

Honest Reporting, a media watchdog NGO, was critical of Harvard’s choice, describing Erekat as a “rejectionist.” The report cited Erekat’s role in the Camp David negotiations in 2000 in which Israel agreed to give the Palestinians up to 96% of the West Bank with land swaps to make up for most of the difference.

“Had they accepted this deal, the Palestinians would have wound up with sovereignty over the Temple Mount with its capital in eastern Jerusalem,” Honest Reporting noted. “In addition, there would have been an international effort made to compensate Palestinian refugees.”

“If diplomacy is ‘the art of compromise,’ then a great Palestinian diplomat — one who is equipped to teach others — would certainly have accepted this deal. But while Israel agreed, Erekat and the Palestinian team rejected the offer. Instead, they unleashed the Second Intifada on Israel in which hundreds of Palestinian terrorists murdered and maimed thousands of Israelis in suicide bombings in restaurants, cafes, malls and on buses.”

The report also noted Erekat’s role in the 2007 Annapolis Conference in which then Prime Minister Ehud Olmert offered even more that was offered at Camp David. Again, despite the opportunity to establish a Palestinian entity, Erekat and the Palestinian negotiators rejected the deal.

The report also noted that Erekat has earned a reputation for lying. After a suicide bombing in a Netanya hotel during a Passover celebration in 2002 during the Second Intifada that killed 30 people and injured 140, the IDF entered Jenin, the origin of many of the terrorists involved in the bombing. Erekat criticized Israeli actions and characterized the IDF’s 2002 assault in the city as a “massacre” and a “war crime”, alleging that Israel killed more than 500 Palestinians. After the incident was over, the death toll was recorded at 53-56 casualties, mostly combatants.

During a 2014 interview with Al Jazeera television, Erekat made the outrageously false and outright libelous claim that Israel assassinated Palestinian leader Yasser Arafat.

In a November 2015 document that Erekat released to the media called “Key Points to Remember when Reporting on Occupied Palestine,” he wrote: “The main issue is the Israeli occupation” and that “Israel occupies the State of Palestine.” There has never been a political entity known as the “State of Palestinian”. Juda and Samaria are disputed territories after being conquered by Israel in the defensive 1967 Six-Day War. Prior to 1967, the region was illegally occupied by Jordan.

“How can someone who has repeatedly gone on record with outright lies be trusted by Harvard to teach the truth to the ‘best and brightest?’” Honest Reporting asked. “Why would Harvard entrust Erekat with shaping the minds of these future leaders?”

“And finally, while Erekat cloaks himself as a diplomat and is treated by the media as a moderate Palestinian voice — having appeared on the BBC, CNN and even the more conservative Fox News — he is, by contrast, an extremist who said in a 2014 Al Jazeera interview that violence against Israelis is a Palestinian “right” and that he ‘cannot accept Israel as a Jewish state.’”

“Given his history of lies, rejectionism, and extremism, the Kennedy School of Government should either rescind their offer for Erekat to serve as one of its fellows for this year, or at the very least balance his ideology with another fellow representing the pro-Israel camp.”

“Tomorrow’s leaders should be presented with a true, fair and balanced perspective about conflicts so that they may develop their own opinions.”

Erekat is on the faculty of An-Najah National University in Shechem (Nablus). In 2010 six members of the faculty were arrested by PA security forces for being closely linked to a charity that is suspected of being a front for Hamas.