Asteroid Expected to Hit the Earth right before Election

“Before the great and terrible day of Hashem comes,* I will set portents in the sky and on earth: Blood and fire and pillars of smoke;”

Home » Asteroid Expected to Hit the Earth right before Election 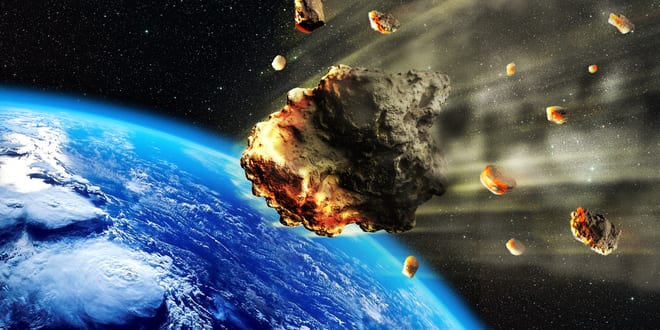 Many people are concerned about the potential aftermath of the 2020 US presidential election but a recent revelation by NASA has given residents of the Earth even more to worry about on the day before the election: an asteroid on a collision course with the planet.

The asteroid 2018VP1 is expected to arrive on November 2 and, according to NASA’s Center for Near-Earth Object Studies (CNEOS), has a .41 % chance of hitting the Earth with three potential impacts. But even if it does impact on the surface of the planet, the asteroid is not expected to do any damage as at approximately seven feet in diameter, it is relatively small.  Hazardous objects are those estimated to be more than 140 meters in diameter. An Earth-impact by this asteroid might rattle some windows or drop meteorites on rooftops.

Last week, an asteroid about ten feet in diameter flew just 1,830 miles over the southern Indian Ocean at a speed of 27,700 mph. This is the closest such an object has flown past Earth on record. The asteroid was first detected on July 26 by the Zwicky Transient Facility, a robotic camera that scans the sky.

Thought NASA voiced assurances that neither of these near-misses was reason for concern, some people from NASA are not so confident. In 2019, NASA administrator, Jim Bridenstine, warned an audience at the International Academy of Astronautics’ Planetary Defense Conference, about the very real possibility of a large meteor crashing into the earth. Bridenstine referred to an asteroid with a diameter of 66 feet that entered the atmosphere over Chelyabinsk, Russia in 2013 at a speed of over 40,000 mph. The asteroid generated an airburst with about 30 times as much energy as that released from the atomic bomb detonated at Hiroshima. Bridenstine told the conference that meteors enter the earth’s atmosphere on a regular basis, but those as large as Chelyabinsk only come once every 60 or so years.

This threat from outer space is consistent with a surprising admission by Zvi Hauser, the chairman of the Foreign Affairs and Defense Committee. In an interview with Israeli television last Thursday concerning the coronavirus, Hauser said that their fear is a meteor that is about to crash on Earth.

Yuval Ovadia, whose films on Nibiru have garnered hundreds of thousands of views, thinks that Hauser’s slip of the tongue revealed what is really concerning the government.

“More and more asteroids are being seen by average people,” Ovadia said. “Of course, governments around the world are aware of this. But they aren’t ready to tell people about the threat of meteors.”

Ovadia explained that Jewish sources describe a star that will appear in the end of days that will wreak havoc but not destroy the world, what many refer to as Nibiru.

“As Nibiru approaches, more asteroids will appear,” Ovadia said. “Nibiru is described in Jewish sources as a star, not as an asteroid. But as it approaches, it pushes asteroids ahead of it like a ship pushes water in front of it.”

Ovadia noted that these celestial phenomena will be accompanied by other catastrophes; earthquakes, plagues, volcanoes, and even disease. This intensive period will spare no one.

“Many of the very wealthy and many of the leaders are preparing bunkers,” Ovadia said. “But how are bunkers effective against a pandemic? They know that Nibiru is coming and this is what they are preparing for. This is why Hauser, the government official in charge of security during the coronavirus, has meteoroids in mind.”

Ovadiah warned that more asteroids will come and as more asteroids appear, the chances of an impact with the earth, even a catastrophic impact, increase. He noted that unlike previous natural catastrophes that occur with no clear reason, the approach of Nibiru as part of the end-of-days will be linked to the acts of men.

“Of course, everything is part of the divine plan,” Ovadia said. “But we see by what is happening in the world, by the way people are acting, that the Final Redemption is approaching. The Bible speaks about politics because it is a powerful expression or social morality. In the end, it will be clear how everything is inter-connected: politics, religion, nature, war, catastrophes. Everything is in the purview of God.”

“It is clear we are living in powerful times, fateful times,” Ovadia said. “It is becoming clear that America and Europe are not safe. And the governments are making it worse by causing division among the people. They should be bringing the people together in prayer and repentance. The safest place in the world will be here in Israel.”