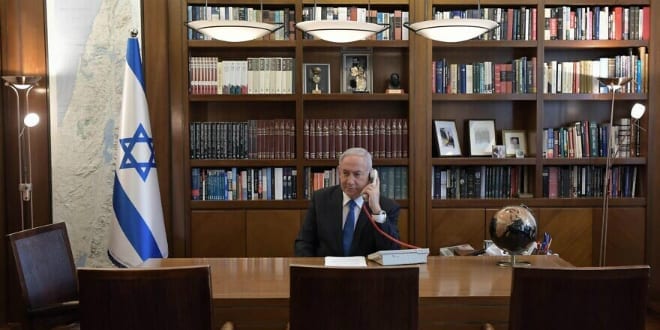 Anyone wondering what had become of Israeli Prime Minister Benjamin Netanyahu’s ostensible July 1 target date to begin the process of extending sovereignty over the Jordan Valley and the Jewish communities in Judea and Samaria received an answer last Thursday.

U.S. President Donald Trump’s announcement on Aug. 13 that Washington had brokered a peace agreement between Israel and the United Arab Emirates—and accompanying reports that the deal precluded “annexation of the West Bank”—put the question to rest.

Once it emerged that Netanyahu had been busy for the past few weeks negotiating the terms of the treaty with Trump and Abu Dhabi Crown Prince Sheikh Mohammed bin Zayed Al Nahyan, his sudden silence on sovereignty became clear. Ironically, the weekly protests outside of the Israeli premier’s official residence on Balfour Street in Jerusalem included the chanting of slogans and waving of banners decrying his “annexation” plans.

The cessation of these plans—derived from the “Peace to Prosperity” vision that Trump unveiled at the White House on Jan. 28—have not assuaged the anti-Netanyahu camp, however. The demonstrators in the capital and elsewhere across the country have other bones of contention to keep their Woodstock-like festivals going.

What they consider to be the prime minister’s poor handling of the current so-called “second wave” of the coronavirus crisis is one such issue. Another is his heading of the government while under indictment for corruption. Calling him “crime minister,” they scream and shout that he should resign.

Never mind that they have been complaining about his reluctance to open the economy completely while gathering in massive numbers and huddling together, many without masks, as though Health Ministry warnings and regulations don’t apply to them.

Forget about the fact that Netanyahu not only was re-elected to head the Likud Party in a democratic primary, and that his remaining at the helm is the result of democratic Knesset elections and coalition-building.

Leave aside the fact that he, like every other Israeli citizen, is innocent until proven guilty. The loud crowds urging his ouster are angry at their lot and hold him responsible for it.

It is natural for an anxiety-ridden population with an uncertain financial future and bleak present to blame its leader. People all over the world are doing just that, accusing their governments of failing to prevent COVID-19 deaths on the one hand and of killing the economy on the other.

Netanyahu, thus, is in good company. But he possesses abilities that few of his counterpart heads of state can match. The deal that he reached with the UAE is but one example among many. His engaging in political clashes while managing a low-intensity conflict against Hamas in Gaza and launching repeated mini-strikes on Iranian facilities is another.

The two are connected, and not only because the Sunni Gulf states now see in Israel a staunch ally in their mutual battle against the mullah-led Shi’ite regime in Tehran, but due to Netanyahu’s knowledge that holding off on his promised sovereignty moves would arouse the ire of many of his supporters, without gaining him any brownie points from his detractors—at least not those on either side of the Israeli spectrum.

Indeed, none of the current protesters will stay home next weekend, persuaded by normalization with the UAE—soon to be followed by similar arrangements with other enemy Arab states, such as Bahrain, Oman and even Saudi Arabia—to champion Netanyahu. Ironically, the self-described peaceniks among them have been pooh-poohing the deal, at best, and siding with the Palestinian Authority in its typical rejectionism, at worst.

Yes, the very Palestinians who saw in Trump’s “Peace to Prosperity” plan the death of the so-called “two-state solution” that they have done everything to torpedo are now railing against the Israel-UAE treaty for the same reason—even though it put a halt to “annexation.”

Meanwhile, the Israelis who have been pushing for sovereignty will begin demonstrations of their own, as some have started to do in the pages of newspapers and on social media. They are the ones whose disappointment in Netanyahu for not having gone ahead with the plan on July 1 already was causing them to shift their support to the Yamina Party at the expense of Likud.

In answer to critics on both sides of the spectrum, Netanyahu penned an op-ed on Monday to “remind [readers] that in the current agreement, not only has Israel not withdrawn from so much as one square meter, rather the Trump plan includes, at my request, the application of Israeli sovereignty over extensive territories in Judea and Samaria. It was I who insisted on including sovereignty in the plan, and this plan has not changed. President Trump is committed to it and I am committed to conducting negotiations on this basis.”

He went on to say, “At the U.N. in 2013, I said that for years, many believed that Israeli-Palestinian peace would advance a broader reconciliation between Israel and the Arab world. I said that I was of the view that peace would be achieved in the opposite fashion: It was expanding reconciliation between Israel and the Arab world that would likely advance an Israeli-Palestinian peace.”

There is no question that Netanyahu was right all along that the root of Middle East strife was not a lack of Palestinian statehood. Only liberal Jews continued to believe that fallacy, to which even most Arabs have stopped paying lip service. Proof that they only used the Palestinian “cause” to bash Israel lays in the appalling treatment of Palestinians in their own countries.

This is something that members of the Israeli right never doubted. Many, however, have cast serious aspersions on Netanyahu’s convictions where preserving Jewish rights in the land of Israel is concerned. They see the UAE deal as a form of capitulation to foreign pressure.

They are wrong to perceive his actions in this light. He is not caving to Washington. Rather, he is buying time and creating optimal conditions for Israel’s road ahead. As Movement for Governability and Democracy managing director Daniel Seaman so aptly put it in these pages on Sunday: “While most politicians are busy playing checkers, Netanyahu has always been playing three-dimensional chess.”