What Does Kamala Harris’s Nomination for Vice President Mean for Israel?

Home » What Does Kamala Harris’s Nomination for Vice President Mean for Israel? 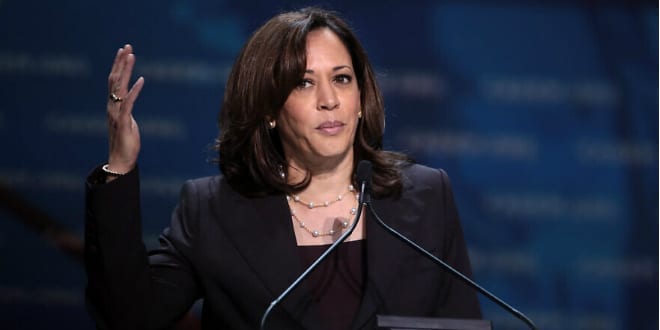 Former U.S. Vice President Joe Biden’s selection of Sen. Kamala Harris (D-Calif.) as his Democratic running mate has reinvigorated an abnormally quiet presidential campaign that has been overshadowed by the fallout from the global coronavirus pandemic. A well-known national figure in recent years, Harris has predictably received praise on the left and scorn on the right. While Biden’s stances on Israel are widely known due to his decades of public service, Harris is lesser known for her foreign-policy stances. As such, what can Israelis and its supporters expect from a potential Vice President Harris?

Eytan Gilboa, an expert on American politics and foreign policy, and a senior research associate at the BESA Center for Strategic Studies at Bar-Ilan University in Ramat Gan, said “of all the 11 female candidates to be vice president, Harris is the best to secure Israeli vital interests in Washington.”

While John Adams, the nation’s first vice president, described his role as “the most insignificant office that ever the invention of man contrived or his imagination conceived,” 231 years later, that role has taken on more significance and has greater potential for impact.

Indeed, current Vice President Mike Pence has taken on a significant role in the Trump administration, especially on Israel. A devout evangelical Christian, Pence has played a role in boosting Trump’s pro-Israel agenda as president. Earlier this year, he made a prominent solo visit to Israel to attend the Yad Vashem event marking the 75th anniversary of the liberation of Auschwitz.

Similarly, Biden, when he served as vice president in the Obama administration, was heavily involved in foreign-policy issues thanks to his years of governmental experience. Will Biden be as generous as Obama and give Harris the freedom to use the vice presidency as a platform to influence the issues close to her heart?

According to Gilboa, if Biden wins, Harris will be an influential vice president, especially given her background and experience.

David Makovsky, a Ziegler distinguished fellow at the Washington Institute for Near East Policy, told JNS that while Biden would deal with foreign policy, he may delegate other issues to Harris.

Harris served as the District Attorney of the City and County of San Francisco. After serving two terms, she was elected as the first woman and the first black woman to serve as California’s Attorney General.

In 2017, Harris was sworn in as a U.S. Senator for California, the second black woman and first South Asian-American senator in history.

‘Her statements are supported by her actions’

Gilboa listed a number of bona fides that play in Harris’s favor with regard to Israel.

First, she belongs to the more moderate branch of the Democratic Party. “There was a concern that Biden would select someone from the progressive, radical wing, and this did not happen,” he said.

Gilboa also noted that Harris is closer to AIPAC than to J Street and has a good record on Israel, though “like all Democrats, she supports a two-state solution, is against expansion of settlements and against annexation.”

However, Harris’s new chief of staff has in the past been critical of AIPAC, praising Democratic candidates who decided to skip the 2019 AIPAC policy conference, saying that AIPAC’s policies and values “are not progressive.”

In June, Harris wrote to U.S. President Donald Trump about annexation, saying it poses a risk to Israel’s security and harms peace prospects.

But unlike those who call themselves progressives, “she is against pressure on Israel to make concessions; she is against imposing a solution; she is against any conditions to U.S. military aid; against the BDS movement; against U.N. discrimination against Israel; and she severely criticized Hamas’s aggression,” said Gilboa. “Not only that, but her statements are also supported by actions.”

Gilboa said it is important to note she was one of the sponsors of a resolution in the Senate to oppose former President Barack Obama’s initiative to get the U.N. Security Council to pass Resolution 2334 that claimed Israeli settlements were illegal.

In June 2017, Harris also signed a call to U.S. President Donald Trump to implement the Jerusalem Embassy Act of 1995 to move the U.S. embassy from Tel Aviv to Jerusalem.

“So she has a good record of a moderate Democrat,” said Gilboa.

He added that Harris is “married to a Jew, has very good relations with the Jewish community, and former Jewish senators Dianne Feinstein and Barbara Boxer have strongly supported her.”

In her address to AIPAC in 2016, Harris spoke about donating to the Jewish National Fund as a child and seeing the “fruits” of those efforts when she later visited as an adult. Harris also visited Israel as a senator in 2017 and met with Netanyahu. And in 2019, she said that “support for Israel is central to who she is.”

Gilboa noted that “unlike the progressives who are hostile to Israel, she has a friendly, perhaps emotional attachment to Israel. This is important,” he said, adding “there is a chance she will be a good ambassador for Israel at the White House.”

According to Gilboa, Harris is “much more experienced than the other candidates because she served in significant positions throughout her career on all the relevant levels.”

“Harris distinguished herself as a very good senator and has the qualifications to serve as president” if she decides to run in 2024 or even later, stated Gilboa.

‘Compensate the progressives in other places’

With regard to Biden’s intention to return to the 2015 Iran deal that Trump withdrew from in May 2018, Gilboa said that, if elected, while “Biden will call the shots on Iran,” this will be “a challenge for Israel” because although Harris didn’t vote for the deal (she wasn’t in the Senate then), she has said that America should return to negotiations and come up with a revised deal.

Gilboa noted that “Iran wants the Democrats to win because it thinks it can get a better deal. Based on the Obama experience, this is not far-fetched.”

He also noted that since Biden “selected Harris from the mainstream branch of the party,” he would have to “compensate the progressives in other places,” such as in cabinet positions.

“They want as many positions as possible on domestic affairs,” said Gilboa, emphasizing that “they care less about foreign affairs,” which Biden would dominate.

Gilboa predicted that either the position of Secretary of State, Ambassador to the United Nations, Secretary of Defense or of the National Security Council “will go to the radicals.”

The question will be how Biden divides the positions between the progressives and the mainstream.

Gilboa said that if Biden appoints one of the progressives to a position important for Israel, “then it could be a problem” since “that person might be influential on Iran.”

He predicted that “it is very likely Biden would immediately try to negotiate with Iran and would remove at least some of the sanctions. Based on experience, this is not going to be a better agreement and will likely be worse.”

Gilboa said Harris won’t have much influence, if at all, on foreign policy or negotiations with Iran. Rather, she will be “more involved in domestic affairs, police reform, economic development, banking and housing.”