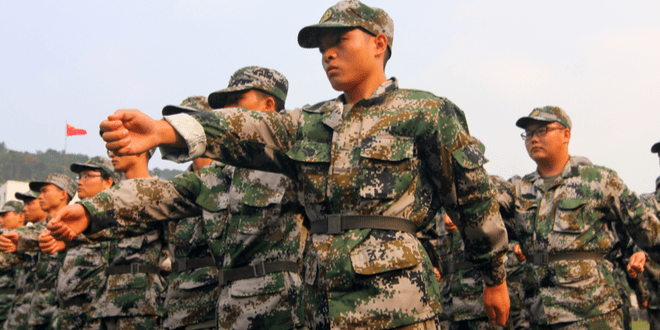 Correspondent Yu Zeyuan reported in  Think China on a recent scholarly article by Chinese military academic Wang Yunfei. The article warned that “right now, it looks very likely that the Trump administration may make an unexpected move and suddenly decide to initiate a military conflict with China in the South China Sea by November.”

As if the prediction were not grim enough, Zeyuan went on to cite another Chinese military academic, Chen Hu,  who predicted a military conflict.

“With two US aircraft carriers loitering in the Indo-Pacific, bombers stationed in Guam, and surveillance planes conducting frequent runs around China, the intention of the US is no longer a show of strength through training, but more of preparing for battle,” Chen wrote.

Wang noted that US-China relations are “on a rapid downward spiral” which is clearly true. The US has accused China of stealing intellectual property. China’s role in the current pandemic exacerbated an already tense situation.

But the tense relations have taken on military ramifications due to China’s policies in the South China Sea which are quite literally “expansionist.” China has been building artificial islands on reefs in waters also claimed by other nations in an attempt to establish facts on the ground that will allow them to annex the region. Images published late last year show military defenses on some islands.

In June,  the US moved three aircraft carriers and their accompanying strike groups to the Western Pacific, positioning them to control the South China Sea. China responded by announcing that they have several types of anti-aircraft carrier missiles in their arsenal.

China has a wide selection of anti-aircraft carrier weapons like DF-21D and DF-26 “aircraft carrier killer” #missiles. South China Sea is fully within grasp of the #PLA; any US #aircraftcarrier movement in the region is at the pleasure of PLA: analysts. https://t.co/X5L0foka6Q pic.twitter.com/rEPjp9gqAZ

Military analysts have noted the recent emphasis by the Chinese military on the  People’s Liberation Army Rocket Force which would not only threaten US aircraft carriers but would US bases in the Pacific theater. The PLA has nuclear strike capabilities.

Michael S. Chase of the U.S. Naval War College wrote in 2014 that if such a strike were waged against US forces, it would come without warning.

“In all, Chinese military writings on conventional missile campaigns stress the importance of surprise and suggest a preference for preemptive strikes,” Chase wrote.

At the time, China’s National Institute for South China Sea Studies published its 2020 research report on the US military presence in the Asia-Pacific region amid the US’ recent increased military activities near China. The report warned that the possibility of a conflict could substantially increase over the next year.

“Such frequent patrols are on the level of pre-battle strategic technical surveillance,” Wang wrote. “Moreover, B-1B and B-52H bombers have conducted several simulated attacks on China’s reefs in the South China Sea. This has probably helped the US form a solid battle plan.”

Wang even went so far as to suggest several initial targets for a US military invasion of the South China Sea, noting that the B-1 bomber is especially suited for such attacks.

Wang called for preparedness on the part of the Chinese military, including the deployment of fighter jets and air defense missile systems on its airbases in the Spratly Islands.

Shi Xiaoqin from Zhejiang University’s National Institute for South China Sea Studies published an article last month in Global Times described the situation in the SOuth China sea as mounting military one-upmanship that could and has tripped out of control, noting that in 2001, a US aircraft collided with a Chinese fighter over the South China Sea.

In an expert analysis,  Lawrence A. Franklin of the Gatestone Institute noted that Shi was claiming that the US was intentionally trying to provoke China into a military conflict.

Rabbi Pinchas Winston, a prolific end-of-days author, had a distinctly prophetic understanding of the situation in the South China Sea.

“Though it is true that there is no explicit reference to China in the Bible, that does not preclude understanding China in a prophetic role,” Rabbi Winston told Breaking Israel News. “The gematria (Hebrew numerology) of Gog and Magog is 70, alluding to the 70 nations. This can certainly include China.”

It is interesting to note that according to Mongolian tradition, their nation was descended from Magog.

The Mongolian Empire once included sections of Russia, China, and North Korea.  The Chinese and all the minority groups living in China are of the Mongoloid race, which stems from Noah’s son Japheth. Etymologists have conjectured that the name Mongol is derived from the name Magog.

“Magog can be recognized by their traits and their actions, regardless of their actual bloodline, ” Rabbi Winston said. “Magog is an ‘in-your-face’ nation. Magog thinks and acts as if the entire world belongs to them, that they are the masters of everything. They don’t care what anyone else thinks or even needs to stay alive. Gog is not afraid to start a huge conflict just to get one thing that they want. They also make alliances for the moment lasting only as long as their interests.”

“The War of Gog and Magog is not intended to punish Israel or the nations,” Rabbi Winston said. “The real purpose is to make people choose, to make it clear what side they are on. And this is entirely evident in their attitude towards Israel.”

“Once the War of Gog and Magog begins, everyone will look back and see how it makes sense,” Rabbi Winston said. “But if you look at the current geopolitical situation from a Biblical perspective, it makes much more sense and you will see where it is going.”

It should be noted that the Chinese military will be holding week-long  “live-fire target attack drills” in the South China Sea next week.