They paid the hewers and craftsmen with money, and the Sidonians and Tyrians with food, drink, and oil to bring cedarwood from Lebanon by sea to Yaffo 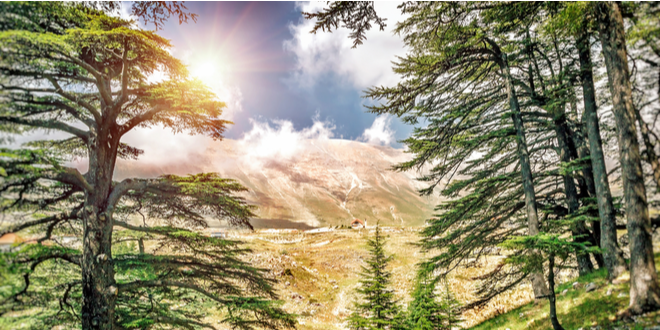 A recent statement by Lebanon’s president suggested that he would be receptive to an agreement with Israel similar to the one signed with the United Arab Emirates. The announcement has huge political and security implications, suggesting that Hezbollah may be on its way out, but, more importantly, a pact of brotherhood with Lebanon would be an element in the construction of the Third Temple as it was in the days of King Solomon.

In an interview with French-language BFM TV on Saturday night, Lebanon’s President Michel Aoun was asked if he would consider making a peace agreement with Israel as the United Arab Emirates had just done.

“That depends, Aoun responded. “We have problems with Israel and we have to resolve them first.”

Though the response was non-committal, this represented a major shift in his position on Israel.  In 2006, as head of the Free Patriotic Movement (FPM), he signed a Memorandum of Understanding with Hezbollah which included a military strategy targeting Israel. Hezbollah is a powerful political entity, having fully one-third of the seats in Lebanon’s parliament.

Concerning the recent normalization deal signed between the UAE and Israel, Aoun stated that the UAE is an “independent country.”

From the inception of Hezbollah to the present, the elimination of the State of Israel has been one of Hezbollah’s primary goals. Some translations of Hezbollah’s 1985 Arabic-language manifesto state that “our struggle will end only when this entity [Israel] is obliterated”. According to Hezbollah’s Deputy-General, Naim Qassem, the struggle against Israel is a core belief of Hezbollah and the central rationale of Hezbollah’s existence. Towards this end, Hezbollah has acquired an estimated 100-150,000 rockets.

The recent blast in Beirut Port has turned public opinion against Hezbollah. The explosion killed at least 171, wounded at least 6,000. Causing an estimated $10–15 billion in property damage, it left an estimated 300,000 people homeless. Within a few hours of the blast, Hezbollah announced the cause fo the blast was 2,750 tons of ammonium sulfate fertilizer stored for six years in a portside warehouse.

Hezbollah leader Sayyed Hassan Nasrallah, who threatened a devastating rocket attack targeting an ammonia storage facility in Haifa two years ago, threatened revenge against Israel on Saturday if Israel had a role in the explosion.

This Hezbollah threat comes as many conjecture that the blast was caused by Hezbollah weapons stored at the port. After the blast, thousands of people took to the streets to protest the government, leading many politicians to resign.

When considering Israeli-Lebanese relations, it is important to note that Lebanon’s flag prominently features a cedar; the national symbol of Lebanon. A massive conifer, the tree appears in the Bible in several places and King David praised them, hinting at the role they would play in the construction of the Temple.

The righteous bloom like a date-palm; they thrive like a cedar in Lebanon; planted in the house of Hashem, they flourish in the courts of our God. Psalms 92:13:14

And, in fact, When David’s son, Solomon, began to build the first Jewish Temple In Jerusalem, he immediately turned to the government of Lebanon to play an essential role in its construction.

Shlomo sent this message to King Huram of Tyre, “In view of what you did for my father David in sending him cedars to build a palace for his residence— see, I intend to build a House for the name of Hashem my God; I will dedicate it to Him for making incense offering of sweet spices in His honor, for the regular rows of bread, and for the morning and evening burnt offerings on Shabbatot, new moons, and festivals, as is Yisrael‘s eternal duty. II Chronicles 2:2-3

The cedars from Lebanon were also used as a major element in the construction of the Second Temple.

They paid the hewers and craftsmen with money, and the Sidonians and Tyrians with food, drink, and oil to bring cedarwood from Lebanon by sea to Yaffo, in accord with the authorization granted them by King Cyrus of Persia. Ezra 3:7

Work must begin soon if the cedar will appear in the Third Temple. Over the centuries, extensive deforestation has occurred, with only small remnants of the original forests surviving. The Lebanese state has created several reserves, utilizing a DNA-based method of identification to ensure that reforestation efforts in Lebanon are of the cedars of Lebanon and not other types. One reserve named the Cedars of God located in the Kadisha Valley of Bsharr is one of the last vestiges of the extensive forests of the Lebanon cedar.

Rabbi Yosef Berger, the rabbi of King David’s Tomb on Mount Zion, noted that official relations with Lebanon would certainly facilitate the construction of the Third Temple, but it also represented the appearance of other essential elements.

“The altar cannot be constructed of stones shaped by iron implements since iron is used in war to shorten life and the Temple is meant to lengthen life,” Rabbi Berger noted. “For that reason, King David, who waged many wars, was unable to construct the Temple. His son, King Solomon, made treaties and was, therefore, able to build the Temple.”

“People who rely on reason will ignore or not even be able to see the changes that are happening. If you see current events through the eyes of faith, rely on the bible, the plan is very clear.”

The rabbi noted that this unnaturally quick transition from war to peace was hinted at by the Prophet Isaiah.

Thus He will judge among the nations And arbitrate for the many peoples, And they shall beat their swords into plowshares And their spears into pruning hooks: Nation shall not take up Sword against nation; They shall never again know war Isaiah 2:4