he nations are but a drop in a bucket, Reckoned as dust on a balance; The very coastlands He lifts like motes. 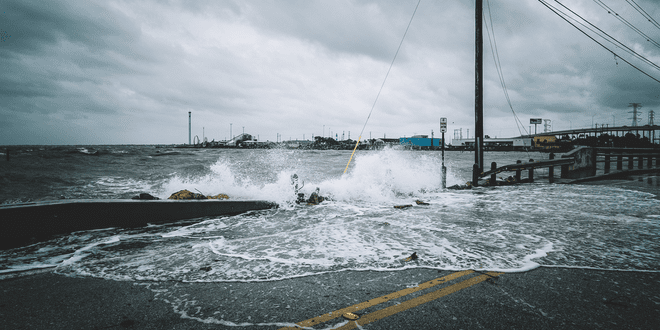 Isaias was downgraded from a hurricane to a tropical storm on Monday as it lingered 55 miles off the coast of Florida, dumping 4-6 inches of rain in some parts of the state despite the distance and knocking out electricity to about 27,000 residents. With winds still gusting at over 70 mph, the storm is expected to move northward, hitting the Carolinas and possibly moving as far north as Delaware on Tuesday. Heavy rain is expected as fr north as  New York. Evacuations were ordered in several areas of the Carolinas as the governor of North Carolina declared a state of emergency. Rivers were expected to rise above moderate flooding level and tidal surges of 2-4 feet were predicted.

Isaias, pronounced ees-ah-EE-ahs, is the Spanish-Latin derivative of the Hebrew name Isaiah. In this case, choosing the name for a hurricane is ironic as it literally means  “God is my salvation.”

The name proved to be both timely and prophetic. Torah blogger Yeranen Yaakov noted the hurricane’s destructive nature.

“ On Thursday, before it became a hurricane, it uprooted trees, destroyed crops and homes and caused widespread flooding and small landslides in the Dominican Republic and Puerto Rico,” Yeranen Yaakov wrote. “One man died in the Dominican Republic. In Puerto Rico, the National Guard rescued at least 35 people from floodwaters that swept away one woman, whose body was recovered Saturday.”

The storm’s arrival coincided with the Sabbath following the holy day of Tisha B’Av that commemorates the destruction of both Jewish Temples in Jerusalem. This sabbath is referred to as “Shabbat Nahamu” (sabbath of comforting). The name comes from a section of the Book of Isaiah read on that sabbath as the haftarah (selections from the books of Prophets publicly read in the synagogue) which begins with confronting.

Comfort, oh comfort My people, Says your God. Speak tenderly to Yerushalayim, And declare to her That her term of service is over, That her iniquity is expiated; For she has received at the hand of Hashem Double for all her sins. Isaiah 40:1-2

Yeranen Yaakov cited verse 15 as being relevant to the ‘Isaiah’ storm.

The nations are but a drop in a bucket, Reckoned as dust on a balance; The very coastlands He lifts like motes. Isaiah 40:15

Yeranen Yaakov then brings two commentaries, Rasi and Metzudot, that explain the verse.

Scarce are they planted, scarce are they sown, scarce hath their stock taken root in the earth; when He bloweth upon them, they wither, and the whirlwind taketh them away as stubble.

The blogger notes that Jews are beginning a series of seven sabbaths focused on comforting the Jews, all from the Book of Isaiah. He concludes by suggesting that this confluence of storms and reading the prophet may be a “sign” indicating