A Unified Reminder of the Iranian Threat

Home » A Unified Reminder of the Iranian Threat 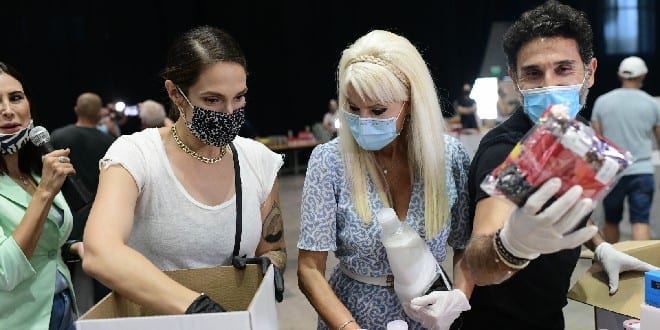 In a rare moment of unity, Israeli Prime Minister Benjamin Netanyahu and Defense Minister Benny Gantz addressed the nation together on Monday night. Hours earlier, the shaky coalition partners—whose agreement stipulates a rotation of the premiership in November 2021—engaged in a proverbial battle over the budget. If one is not passed by Aug. 25, less than a month from now, the Knesset will dissolve automatically, and new elections will be held.

But the issue of whether to pass the one-year budget that Netanyahu is seeking or the two-year budget on which Gantz is insisting was not the subject of their joint announcement, which they delivered live on prime-time television.

No, the focus of the Netanyahu-Gantz press conference was on a fight of a more literal nature—one involving external enemies, not internecine strife. Earlier in the day, the Israel Defense Forces had thwarted the infiltration of Hezbollah terrorists into the country via Lebanon. Had the border breach not been detected and countered, any number of Israeli soldiers and civilians could have been wounded, kidnapped or killed.

The message that Netanyahu and Gantz conveyed, each in turn, had a double aim: to reassure the Israeli public that the government and the army are in control of the situation, and to warn Tehran and its proxies—housed by Beirut and abetted by Damascus—that Jerusalem is willing and able to deal them a crushing blow.

Ironically, this jolt back to Israel’s pre-pandemic reality served as a refreshing break from the incessant coverage of the coronavirus, economic crisis and nationwide protests.

“Israel will continue to take action against Iran’s efforts to entrench militarily in our region,” Netanyahu began, apparently in a veiled reference to a series of recent “unexplained” and “mysterious” explosions at power plants and industrial facilities across the Islamic Republic.

After giving credit to the IDF for preventing the Hezbollah cell from accomplishing its mission, he said “we view the effort to infiltrate into our territory with utmost gravity. Hezbollah and Lebanon bear full responsibility for this incident and for any attack against the State of Israel emanating from Lebanese territory.”

He went on: “Hezbollah needs to understand that it is playing with fire. Any attack against us will be met with great strength.”

He concluded by reminding the Shi’ite terror master of the “major mistake” that he made in 2006, when he sparked a war with the Jewish state and “underestimate[ed] Israel’s determination to defend itself.”

This caused Lebanon to “pay a heavy price,” he said, suggesting that Hezbollah leader Hassan Nasrallah “not repeat” the error.

Gantz directed his words at the countries harboring Nasrallah’s bands of murderers.

“Lebanon and Syria are sovereign states and will bear the painful responsibility for any terrorist act that takes place on their territory,” he said. “Anyone who dares to test the power of the IDF will endanger himself and the country from which he operates. Any action against the State of Israel will lead to a powerful, sharp and painful response.”

He ended with a promise and a threat.

“The IDF is ready to respond; the IDF is prepared for a response,” he declared. “The State of Israel, the defense establishment and the IDF will continue to operate wherever it is necessary to so, as near or far as this may be.”

The significance of Netanyahu’s and Gantz’s remarks—exactly 14 years after the Second War in Lebanon—cannot be overstated, particularly in light of their disparate positions on everything else. During that 34-day military conflict in the summer of 2006, which began on July 12 and ended on Aug. 14, then-Prime Minister Ehud Olmert stressed that Israel had “no conflict with Lebanon and its people.”

This proved extremely problematic, of course, because Hezbollah, like Hamas in Gaza, used civilians as human shields, and civilian infrastructure for the storage and production of weaponry. Avoiding collateral damage, then, was detrimental to defeating the enemy.

To make matters far worse, the United Nations-brokered “end” to the war—the enactment of U.N. Security Council Resolution 1701—was a disaster. In the first place, it was slanted against Israel. No surprise there.

Secondly, it deployed the U.N. Interim Force in Lebanon (UNIFIL) to monitor Israel’s withdrawal, assist the Lebanese government in deploying its army in the south and keep Hezbollah from rebuilding its arsenal of death.

Well, neither the Lebanese government nor UNIFIL adhered to any of the resolution’s clauses. Hezbollah proceeded to rearm unhindered, while increasing its power in the Lebanese Parliament.

Today, it is estimated to possess as many as 120,000 missiles, rockets and mortars that it amassed under UNIFIL’s “watchful” eye. Oh, and it constructed several massive, well-equipped terror tunnels extending from Lebanon into Israel, the last of which was sealed off by the IDF in June 2019.

Netanyahu has led the Israeli government since the 2009 elections, following Olmert’s resignation and the failure of Tzipi Livni—his successor as the head of the now-defunct Kadima party—to forge a coalition. His lengthy tenure at the helm is due in large measure to the sense of security that he has instilled in a populace faced with mortal enemies along and within its borders.

His initial handling of the coronavirus crisis, too, seemed to be a source of comfort—so much so that even some of his worst detractors grudgingly gave him credit for it. It wasn’t until after he and Gantz formed the current national-unity government that the rallies against him turned violent.

Suddenly, mobs began to take to the streets, with rioters demanding that the “crime minister” resign, that restaurants remain open, and that Judea and Samaria not be “annexed,” among many other non-related complaints.

One woman, for example, climbed onto a menorah statue near the Knesset and bared her breasts “to put the social workers’ strike on the agenda.”

There is no doubt that Hezbollah and its puppeteers in Tehran—all of whom have been suffering from their own COVID-19 and economic crises—are observing the chaos in Israel with satisfaction. They undoubtedly interpret it as a sign that Netanyahu is both distracted and weakened, which may help to explain Monday’s incident at the northern border.

What neither they nor his domestic rivals seem to take into account is that Israelis waving posters and chanting slogans feel safe—not from the physical and financial ramifications of the virus, but from Iranian aggression.