Will Israeli and Indian Scientists Develop a Breakthrough in Coronavirus Testing?

Home » Will Israeli and Indian Scientists Develop a Breakthrough in Coronavirus Testing? 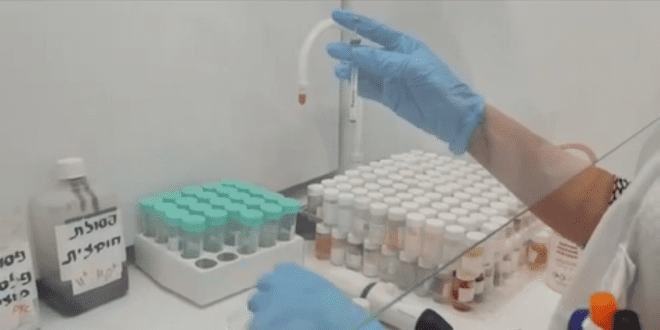 An Israeli delegation organized by the Defense Ministry, consisting of 20 specialists, is in India working with counterparts to further develop four potentially groundbreaking Israeli innovations for the rapid detection of the coronavirus.

Faster detection enables governments and health authorities to enable a greater degree of economic activity, and testing kits found to be ready for use could be placed at the entrances of sites such as airports and shopping centers.

Among the technologies being tested is a test that uses artificial intelligence to analyze the voice, and identify changes and deteriorations in the condition of one’s respiratory system.

A second technology brought to India is a breathalyzer test based on the use of terahertz waves. The patient must breathe into a sterile sampling kit, after which the sample is analyzed using artificial intelligence for rapid virus detection.

A third innovation is an isothermal testing kit—a biochemical test that detects the detection of the virus in a saliva sample. A chemical reaction that takes place once the content is heated at about 60 degrees Celsius enables detection within 30 minutes.

Lastly, a test kit was brought to India that uses polyamino acids. It detects coronavirus proteins collected in a saliva sample within several minutes.

The delegation, led by Israeli Ambassador to India Ron Malka, includes representatives from the Defense Ministry, the Israel Defense Forces, the Ministry of Health and various industries. It includes Israel’s defense attaché to India, Col. Assaf Meller, and the medical personnel are being led by Professor Nati Keller, an infectious diseases specialist from Sheba Medical Center at Tel Hashomer.

“All four of the innovations have been chosen for further testing because they’re considered to be more mature technology,” a defense source told JNS in recent days. “They’ve already undergone testing here in Israel. In India, a massive scale of testing can be done. The delegation will work with our partners in the Indian Office of the Principle Scientific Advisor.”

On Sunday, the delegation took off from Ben-Gurion Airport on two separate Israir flights, and landed in Delhi on Monday morning.

In a statement, the Israeli Defense Ministry said “the cooperation between Israel and India will enable the delegation and its Indian counterparts, to collect tens of thousands of samples in a short period of time, and to analyze them using computer systems based on artificial intelligence. This massive sampling will shorten processes and advance the approval of effective technology. It should be noted that all of the necessary Israeli and Indian approvals were acquired ahead of this joint activity.

“The aircraft will also carry cutting-edge equipment brought by the Ministry of Foreign Affairs and members of the private sector,” it continued. “This special delivery also includes ventilators exported to India following an exceptional approval.”

Foreign Minister Gabi Ashkenazi said in a statement that “since the start of the global pandemic, the Ministry of Foreign Affairs is working to advance international cooperation and mutual assistance. I see great importance in the cooperation with India in the fight against the COVID-19 pandemic. This operation conveys a message of friendship and solidarity with India. It also provides a unique opportunity for scientific and technological cooperation that can assist Israel, India and the world in coping both with the pandemic and with the economic crisis that came with it.”

Earlier this week, Dani Gold, head of the Directorate of Defense Research and Development, told reporters on a conference call that Israel and India are working together to gain control of the pandemic, and that one of the ways to achieve this is through a new generation of rapid testing. “PCR tests take too long to control the disease. We want to open economies in certain area. We are trying to use new technology for fast testing that will take between seconds to minute. We aim for less than a minute.”

The cooperation between Israel and India will enable the delegation, and its Indian counterparts, to collect tens of thousands of samples in just 10 days and analyze them using computer systems based on artificial intelligence. This massive sampling will shorten processes and advance the approval of effective technology. All tests will be validated using PCR tests, added the Defense Ministry.

“In recent years, Israel-India relations have developed into a strategic partnership and since the beginning of the corona crisis, the two countries have agreed to provide mutual assistance and to cooperate in areas of research,” the Ministry added. “For the purpose of this specific activity, the government of India has designated a local team of around 100 professionals, as well as a team dedicated to the construction of testing sites that will be operated jointly by the Israeli and Indian delegations.”