Thus said the lord of Hosts, the God of Yisrael: Mend your ways and your actions, and I will let you dwell in this place. 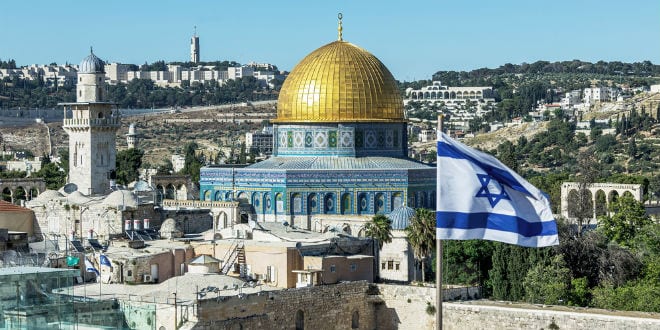 A major step towards fixing the broken heart of the Jewish people on the Temple Mount was made on Tish B’Av, the day commemorating the destruction of the Temples: the Israeli flag was displayed for the first time since Israel conquered its holiest site in the 1967 Six-Day War.

Despite coronavirus restrictions and threats of Muslim violence, almost 1,000 Jews ascended to the Temple Mount on Tisha B’Av. Among them was Chaim Brosh, a leader of the Students for the Temple Mount organization.  As he was waiting to enter the Temple Mount Compound, Brosh saw that some friends had an Israeli flag. He has wanted to display an Israeli flag on the Temple Mount for many years so he thought that he would try to fulfill his dream. Jews undergo scrupulous security checks before entering which include checking any bags or items carried onto the mount. Religious items and books are confiscated as are any items displaying Israeli nationalism. Brosh folded up the flag and put it in his pocket, hoping the police would not notice.

Normally, Jews are restricted to a limited clockwise route and required to move quickly. To honor the day of mourning for the Temples, Brosh requested and, surprisingly, was granted permission to make a counter-clockwise circuit. In the first part of his tour of the site, Brosh withdrew the flag from his pocket and held it up for all to see.

“A policeman approached me and asked me to put the flag back into my pocket,” Brosh said. They did not arrest me or even confiscate the flag.”

A similar attempt on Jerusalem Day in 2018 ended in Muslim violence and the police arresting the Jews.

“This is the first time that a Jew has waved an Israeli flag on the Temple Mount and the police did not arrest him,” Brosh emphasized.

When the IDF conquered the Temple Mount in 1967, Motta Gur, the commander of the IDF forces that unified Jerusalem, had an Israeli flag hoisted over the Dome of the Rock. Moshe Dayan, who personally oversaw the war in  Jerusalem, immediately ordered the flag to be removed.

Brosh continued his tour of the site and once again displayed the flag. Two Waqf representatives approached Brosh and began to berate him but the Israeli police distanced them from the group of Jews. This is also highly uncharacteristic of normal procedures in which Jewish religious rights are usually forfeit to appease Muslim aggression.

“It is important to note that this was a decision by the policemen on-site,” Brosh said. “On a different day, with slightly different conditions, the policemen on duty might not permit a flag or any other deviations from the status quo. The Muslims had threatened mass riots on Tisha B’av and this did not materialize. So there was a lot of police at a high level of readiness and very little threat.”

The situation is still not in accordance with Israeli law which mandates equality of religions at the site. When Brosh exited the site, he was ordered to a hearing and a distancing order was issued against him. In addition, ten Jews were arrested on Tisha B’Av for praying at the site. Two Muslims were also detained after chanting derogatory slogans against the Jews, the Ynet news site reported.

Michael Miller, a tour guide at the site and an activist of the Students for the Temple Mount movement,

“Three years ago, this would not have happened,” Miller said. “They used to pat Jews down and do body searches. And the police would have jumped all over a Jew who tried to wave the flag. The situation for Jewish rights has certainly improved.”

“This is kind of religious,” Miller said. “It means that we are back. The timing is significant. While the Israeli government is saying they will grant sovereignty to Judea and Samaria, which they probably won’t do, they are intentionally ignoring the holiest site; the Temple Mount. What good are Judea and Samaria if we toss away the Temple Mount?”

The Jordanian Foreign Ministry published a statement condemning what it called a violation of Israel’s agreement with the Waqf Islamic trust that manages the Temple Mount, according to Hebrew-language media. The statement alleged that Jerusalem had given approval for “hundreds of extremist Jews to break into Al-Aqsa under the protection of the Israel Police.”

It should be noted that Al Aqsa is the silver-domed mosque at the southern end of the compound and no non-Muslims are permitted to enter the building.