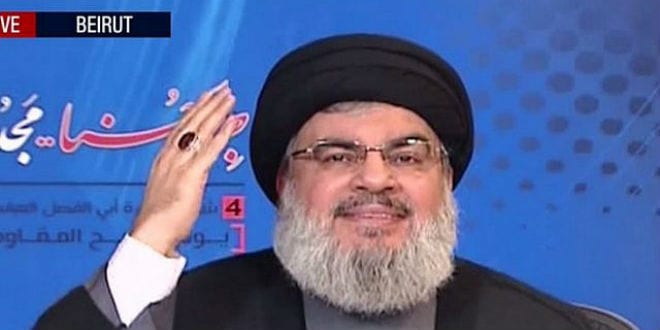 From a position of unprecedented weakness and distress, Hezbollah leader Hassan Nasrallah is back to his old gambling habits. Similar to the summer of 2006, he is now threatening to perpetrate a terrorist attack against Israel in response to the death of one of his operatives in Syria.

Then, Nasrallah’s failed gambit triggered an all-out war, which exacted a terrible price from Lebanon and mainly from the Shi’ite ethnic group he purports to represent. Nasrallah himself was forced to pay a heavy price: his personal freedom. The man has been shuttered in his bunker ever since and doesn’t see the light of day.

Nasrallah, however, is shackled to his equations—because he fears Israel will interpret a failure to act as weakness, he feels obligated to retaliate and is willing to risk a head-on clash. He hopes, of course, that he’ll be able to control the flames by keeping casualties on the Israeli side to a minimum, allowing Israel to absorb the event and temper its own counter-response, as it has done in the past.

For this reason alone Israel should not play into Nasrallah’s hands. Rather, it should nullify the equations he is seeking to dictate and present him with a clear red line.

During the Second Lebanon War, Israel was strung along by poor leadership that failed to bring the IDF’s massive military advantage to bear. Instead of bringing Hezbollah to its knees, Israel was needlessly drawn into a 33-day war of attrition.

And yet, the results of that war sent a clear and decisive message to Hezbollah that Israel will no longer allow the terrorist group to violate its sovereignty and continue attacking it from Lebanese soil. The quiet that prevailed along the border with Lebanon was therefore an important achievement, and it’s a fact that Hezbollah, battered and deterred, recognized that preserving this quiet was just as much in its own interest.

In recent years, however, Israel has allowed Nasrallah to revert to his old computations and permutations and carry out attacks against Israeli forces. Initially this occurred in the Shebaa Farms area, and last September included an anti-tank missile attack from Lebanese soil into Israel.

Israel is far more calculated and cautious than Nasrallah, and on more than one occasion has acted as the “responsible adult” by absorbing his attacks and restraining itself. But Israel should raise the stakes of Nasrallah’s bet and, in all likelihood, expose his bluff. He won’t want and can’t afford to pay with his life or a full-blown war.

More importantly, Israel should reinstitute the same ironclad rule it applies to the Syrian arena, whereby any violation of Israeli sovereignty or attack on its soldiers is a red line that will be reinforced.

Thus, instead of shooting at pointless dummy targets in Lebanon and hailing that as “responding to the source of the fire,” Israel has to claim a real price for violations of its sovereignty—from Hezbollah and the Lebanese government that provides its protection. This is the only way to negate the equation Nasrallah wants to dictate to Israel and set new rules for the game that will ensure that the quiet along the northern border remains intact. Otherwise, the next terrorist attack is only a matter of time.