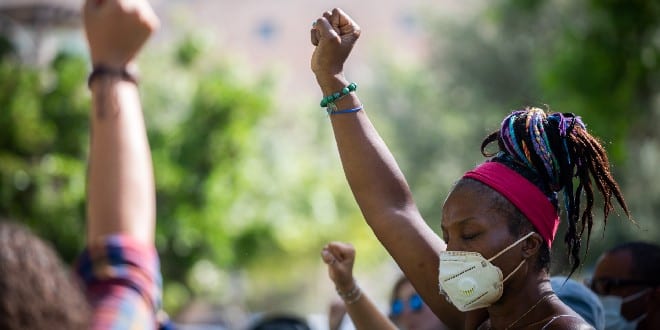 After several weeks in which the country seemed to careen out of control with one bizarre and horrifying event after another—from the coronavirus outbreak to protests, riots and the toppling of statues—it seems as if anything is possible. But news that the National Museum of African American History and Culture had posted a primer on its website (it is closed due to the pandemic) of what constitutes “Whiteness and White Culture” may have been the moment when the nation truly jumped the shark in terms of losing its collective mind in a moral panic about racism.

The museum, a branch of the Smithsonian Institution, put down such things as individualism, belief in the family, work ethic, faith in a single god, respect for authority, belief in justice and majority rule, the written word and politeness, as elements of “whiteness” to be treated with suspicion rather than universal values that all people should respect.

It was just one more piece of evidence that a justified concern about police brutality brought to the fore by the killing of George Floyd by a Minneapolis police officer has now morphed into something else entirely. As absurd as it may seem to those not immersed in woke race ideology, this display makes sense to those who are promoting the Black Lives Matter movement, intersectional studies and revisionist versions of American history like The New York Times’ “1619 Project.”

As such, the discussion about racism has to no small extent been hijacked by those who seek not so much a moral reckoning about reforming society as a revolution that aims to overturn the moral foundations of American culture and thought. The obsession with so-called toxic “whiteness” that must be purged, even if it causes grievous damage not merely to the nation but to African-Americans, must be recognized.

If that is the direction in which the BLM movement is headed, it raises the question of where that leaves the African-American community’s long-standing ally on civil-rights issues: American Jewry. Should American Jews follow their liberal instincts and back this movement despite the implicit threat it poses to American support for Israel, as well as the way it seems to treat them as a particularly troublesome variety of toxic “whiteness?”

The answer from leading Jewish groups is an unqualified “yes.” Not only are they throwing their support behind the BLM movement and its troubling agenda of defunding/abolishing the police, but many Jews also seem to be acting as if even a willingness to question this decision is inherently racist rather than simple common sense.

As much as anything that American Jewry has done, it is the memory of the Jews who marched and sacrificed in the effort to end Jim Crow laws—and the awful legacy of segregation and discrimination against African-Americans—of which the vast majority are the most proud. Indeed, to a group for whom the idea of social justice is integral not just to their political views but also to their conception of Judaism, support for civil rights is as much at the core of their conception of American Jewish identity.

So at a moment when the country is plunged into a furious debate about the persistence of racism, it is entirely natural that Jews should be fully engaged in this discussion. Most Jewish groups needed no prompting or pressure to go all in with respect to support of the Black Lives Matter movement, regardless of the connections of some of its elements to anti-Zionist and anti-Semitic beliefs.

Indeed, while some Jews expressed reluctance about making common cause with the BLM movement, umbrella groups, like the Jewish Council for Public Affairs, which represents community relations councils and federations across the country, made it clear that they thought it would be deeply wrong for the Jewish community to hold back its support. The JCPA is arguing that for most of those involved, a 2014 platform that included attacks on Israel was meaningless.

There’s some truth to that since the phrase, “black lives matter,” is, at one and the same time, an anodyne phrase that everyone supports, as well as a radical coalition with a problematic agenda. But even the JCPA concedes that many of those involved with this decentralized  movement include “some Israel critics, even anti-Semites, among those leading or supporting the fight for racial justice in this country.”

Still, it believes that this should not deter Jews from joining forces with them since “the Jewish community should not abandon the largest movement for racial justice in decades because of fear of a position, even one as objectionable as,” the BLM charter’s embrace of anti-Semitic BDS attacks on Israel. The JCPA’s statement goes on to claim that “only by participating in BLM can we effectively share our concerns about anti-Semitism, the existing call to end military aid to Israel, or any other issues that get thrown in the mix going forward.”

Others believe the obligation to speak up for “Jews of color” means they must also suspend all disbelief when it comes to the BLM mantra.

That seems like normative CRC tactics in which the goal is to express solidarity with other groups and ultimately rally allies to support Jewish interests. But the BLM movement is not like the civil-rights groups that Jews worked with in the past, which shared a common belief that America was, despite past sins and flaws, an inherently just society that could be moved to correct its mistakes. To the contrary, as the museum’s display and the entire tenor of a movement that seems determined to reject the entirety of America’s heritage of liberty and traditional mainstream values makes clear, anyone expecting BLM ideologues to join the fight against anti-Semitism, let alone BDS, isn’t paying attention.

Indeed, the recent surge of anti-Semitic comments from some African-American athletes and celebrities like DeSean Jackson, Nick Cannon and Ice Cube were largely ignored by BLM activists rather than condemned. While there were some blacks who did speak out, like basketball Hall of Famer Kareem Abdul-Jabaar and sports commentator Jemele Hill, they were the honorable exceptions who proved the rule and testified to the acceptance of Jew-hatred among many blacks. Jewish groups, some of which are diffident about confronting African-Americans about anti-Semitism, aren’t likely to rally BLM advocates to confront this issue, let alone seek its sources, such as the widespread influence of hatemonger Louis Farrakhan and his Nation of Islam.

Unfortunately, many liberal Jews are not only failing to see the inherent problems that arise from backing radical BLM ideas like demonizing all police, but they are also buying into the group’s dangerous ideas about the perils of “whiteness,” which represent a particular threat to Jews as well as undermine black aspirations for advancement.

Accepting the ideological constructs behind the idea of White Fragility—the bestselling book that is a modern patent nostrum of foolishness about race—sends well-meaning people down a rabbit hole of rigid racialism that discards Dr. Martin Luther King Jr.’s hopes for a race-blind society. And yet that is exactly what many Jews are doing in this overheated post-George Floyd atmosphere.

In the past, Jews have played a constructive role in the struggle for civil rights—whether by marching with Dr. King or funding African-American education precisely because their efforts were aimed at raising up African-Americans, not abasing themselves at the altar of race.

That is why rather than jumping on the BLM bandwagon, those who claim to represent Jewish interests should be holding that movement to account for its damaging ideology, as well as its anti-Zionist connections and passivity about the growth of anti-Semitism among African-Americans.

Racism is real. But so is the danger of aligning with a movement whose goals are antithetical to the values that are responsible for the tremendous advances towards a better society that the civil-rights movement supported by blacks and Jews in the past achieved.