Israel and the Sino-Iranian Alliance

Home » Israel and the Sino-Iranian Alliance 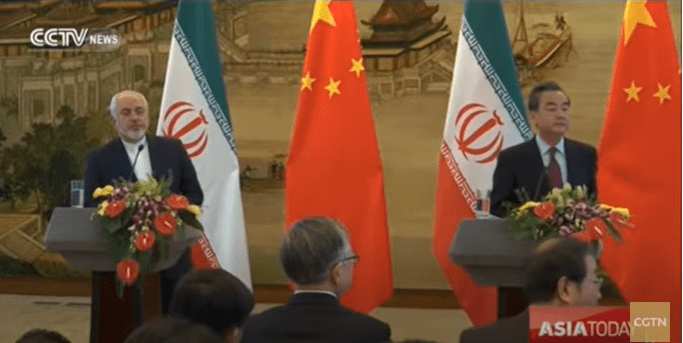 When Chinese President Xi Jinping visited Tehran in 2016, most observers dismissed the significance of the move. The notion that Beijing would wreck its relations with America, the largest economy and most powerful global superpower, in favor of an alliance with Iran, the world’s greatest state sponsor of terrorism, was, on its face, preposterous.

But despite the ridiculousness of the idea, concern grew about Sino-Iranian ties as Iranian political leaders and military commanders beat a path to China’s door. Now, in the midst of the global recession caused by China’s export of the coronavirus, the preposterous has become reality.

Following weeks of feverish rumors, Iran and China have concluded a strategic accord. Last weekend, The New York Times reported on the contents of a final draft of the agreement.

In its opening line, China and Iran describe themselves as “two ancient Asian cultures, two partners in the sectors of trade, economy, politics, culture, and security with a similar outlook and many mutual bilateral and multilateral interests.”

Henceforth, they, “will consider one another strategic partners.”

Substantively, the deal involves Iran supplying China with oil at below-market prices for the next 25 years and China investing $400 billion in Iran over the same period. China committed to expanding its presence in the Iranian banking and telecommunication sectors. Among dozens of infrastructure projects, China will construct and operate ports and train lines. China will integrate Iran into its 5G internet network and its GPS system.

The implications of the deal are clear. China has opted to ignore U.S. sanctions. Beijing clearly believes the economic and diplomatic price it will pay for doing so will be smaller than the price the U.S. will pay for the diminishment of its position as the ultimate arbiter of global markets.

For Iran, China is a life raft saving it from total economic collapse under the weight of U.S. economic sanctions.

Following the naval maneuvers, Iranian Navy commander Rear Admiral Hossein Khanzadi told the Chinese media the exercise showed, “The era of American invasions in the region is over.”

The draft agreement speaks of intelligence cooperation, joint research, the development of weapons systems and Chinese use of Iranian ports in the Gulf of Oman.

Diplomatically, the deal places the United States on a collision course with the United Nations Security Council. Washington’s efforts to extend the U.N. arms embargo on Iran past its expiration date in October will not succeed.

This leaves the United States with only one option for diplomatic efforts to prevent Iran from importing advanced weapons platforms: Triggering the “snapback sanctions” clauses in U.N. Security Council Resolution 2231 which set the conditions for implementing the 2015 nuclear deal between Iran, the permanent Security Council members and Germany.

The “snapback sanctions” clauses enable parties to the resolution to force the automatic reinstatement of all the Security Council sanctions against Iran which were suspended with the implementation of the nuclear deal in 2015. In light of Iran’s extensive breach of the deal’s limitations on its nuclear work, as a party to Resolution 2231, the United States has the power to activate the clause.

For Israel, the Sino-Iranian pact is a strategic inflection point. The deal has two immediate implications from Israel’s perspective. The first is operational.

The possibility that China will soon be actively assisting Iran in its pursuit of nuclear weapons makes the continuation and expansion of the various unexplained explosions at Iranian nuclear and other strategic facilities a matter of highest urgency.

Some of the Iranian opposition reports regarding the Iranian-Chinese deal claim Iran agreed to the permanent deployment of Chinese military forces on its territory. If these reports are accurate, it means those forces may become a tripwire. Any attack against Iran’s strategic facilities could set off a much wider war in which China would be directly involved and fighting on behalf of Iran.

The second immediate implication of the Sino-Iranian pact for Israel is that it requires the government to change its approach to Chinese involvement in infrastructure development and management and to Chinese investment in Israeli technologies and technological research and development.

In May, U.S. Secretary of State Mike Pompeo arrived in Jerusalem for a brief and unexpected visit. In public appearances over the course of his lightning trip, Pompeo warned of the dire implications for U.S.-Israel relations if China continues to participate in infrastructure and technology projects in Israel.

“We don’t want the Chinese Communist Party to have access to Israeli infrastructure, Israeli communication networks,” he said, calling them “the kind of things that endanger the Israeli people and the ability of the U.S. to cooperate with Israel.”

Two weeks after Pompeo’s visit, Israel awarded an Israeli firm a contract to build a desalination plant in Ashdod. The government had initially planned to award the tender to a Chinese firm.

U.S. pressure continues apace. The Americans are maintaining their efforts to persuade Israel to cancel or limit the agreement it concluded with a Chinese firm last year to build and operate a new port in Haifa and other projects.

Until now, Israel viewed the possibility of removing Chinese firms from major construction projects and other deals as a regrettable price of its alliance with the United States rather than an Israeli interest.

In response to the deal, Israel should consider replacing Chinese firms with U.S. ones, which at a minimum will not be compromised by ties with Iran. If U.S. firms are able to produce competitive bids, or develop strategic partnerships with Israeli firms to produce large-scale infrastructure projects at reasonable prices, the move would redound to the economic and strategic benefit of all sides. Certainly, efforts to develop cost-effective alternatives to Chinese contractors would firmly integrate Israel into the Trump administration’s post-coronavirus efforts to reduce U.S. and allied supply chains’ exposure to China.

Globally, the Sino-Iran pact will compel new strategic alignments. Europe is likely to split around the choice between the United States and China. Some European governments will choose to align themselves with Iran and China. Others will prefer to remain allies of the United States.

With its weak and sputtering economy now largely integrated into the Chinese market, at least in the short term Russia will continue to stand on China’s side while winking at the United States. Things could change though, as time passes.

China’s decision to initiate a direct confrontation with the United States over Iran was a gamble. It wasn’t a crazy move, given China’s growing economic and technological power. But bets against America are far from safe. The ultimate outcome of China’s Iran gambit will be determined in large part by the shape of the American and Chinese economies in the coming months and years as they emerge from the coronavirus pandemic. And as things now stand, the United States is well positioned to emerge from the pandemic in a sounder economic position than China.

Corporations large and small from countries across the globe are either considering or actively working to relocate their production lines out of China. One of the Trump administration’s key efforts today is securing U.S. and allied supply chains from China by moving as many factories as possible either to the United States itself or to allied states. Japan’s Sony and South Korea’s Samsung are both reportedly planning to move their manufacturing bases from China to Vietnam.

The impact of these moves on China’s economic growth prospects and global influence are likely to be profound. As things stand, China’s only ally in its neighborhood is its client state North Korea.

India, which is now in a border conflict with China, has already taken steps to limit China’s technological penetration of its territory. Indian strategists both inside and outside government are taking a hard look at their military dependence on Russian platforms in light of Russia’s growing economic dependence on China. The United States has not hidden its interest in developing a strategic alliance with India and replacing Russia as India’s main supplier of air defense and other platforms. Israel, which is already a major arms supplier and ally to India, could play a positive role in advancing that goal.

How the Arab states respond to China’s decision to stand with Iran will be determined both by the economic power balance between China and America and by the status of Iran’s nuclear program. If Iran achieves nuclear capability, the Arabs will feel compelled to view China as their shield against Iran. If Iran’s nuclear program is dramatically diminished, the Arabs are likely to feel more secure turning their backs on Beijing, siding with the United States and strengthening their ties with Israel.

For decades, U.S. warnings notwithstanding, Israel perceived China as a neutral power and a highly attractive market. Unlike the Europeans, the Chinese never tried to use their economic ties with Israel to coerce Israel into making concessions to the Palestinians. The Chinese didn’t work with radical Israel fringe groups to subvert government and military decisions. They just seemed interested in economic ties for their own sake.

Now that China has chosen to stand with Iran, Israel must recognize the implications and act accordingly.