“You shall take choice flour and bake of it twelve loaves, two-tenths of a measure for each loaf.” 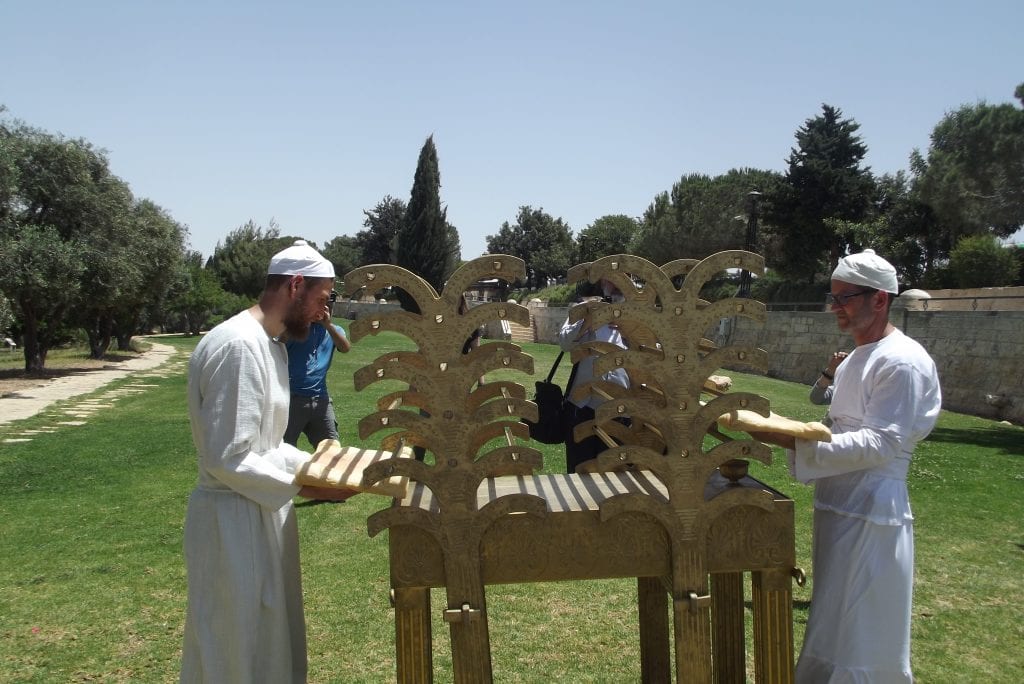 Les Saidel, a veteran immigrant to Israel, originally from Johannesburg, South Africa, likely knows more about the Biblical showbread than anyone else on earth.

Called Lechem Hapanim in Hebrew (literally, bread of the faces), the ancient art of preparing the showbread for use in the Holy Temple in Jerusalem has not been practiced for close to 2000 years.

During the Second Temple period, the showbreads were baked by the Garmu family of Levi’im (Levites). Each Friday, the Garmu family baked a new set of 12 loaves. Each of the loaves represented one of the 12 Tribes. They were placed on the Temple’s golden shulchan (table) in two stacks of six and they remained on the shulchan all week.

According to Saidel, these special breads had miracles associated with them during the time the Holy Temples stood in Jerusalem. Despite the fact that the breads sat out uncovered for seven days, they miraculously remained fresh and warm, even a week later.

The showbreads were replaced every Friday and the previous week’s showbreads were distributed among the incoming and outgoing shifts of kohanim (priests assigned to work in the Temple). Saidel explained that this amounted to 400 or 500 people eating from these 12 loaves. Despite the fact that each kohen (priest) received only a small amount of bread, it miraculously was as filling as if they had eaten an entire meal.

Saidel has lived in Israel for 35 years. For the first 25 years after making aliyah (immigrating to Israel), he worked as a computer programmer. Given the combination of the bursting of the .com bubble and a bit of a mid-life crisis after finding himself without a job, Saidel returned to his childhood passion of baking 11 years ago.

“I fell in love with whole grain bread,” he reported. He and his wife “opened an artisan bakery serving healthy organic breads and baked goods.” Over the last five years, their business pivoted from primarily baking and selling bread to mostly offering baking workshops for families, Jewish and Christian tourists and school groups.

The Saidels started out teaching about baking challah (the traditional braided Shabbat bread) and sourdough breads. In 2017, Les created a workshop called Breads of the Beit HaMikdash (Temple) which launched his passion for researching the history of bread in the Holy Temple.

Today, the Showbread Institute, established in 2018 and based in Israel’s Shomron (Samaria), exists to “to serve as an umbrella organization for the research, publication and educational activities… and to [reacquaint] the People of Israel with the Temple Service in preparation for the rebuilding of the Third Temple, speedily in our days,” the website explains.

Unfortunately, the Garmu family who used to bake the Temple’s showbread didn’t record how they did it. “The secret of the Lechem Hapanim was lost after the Second Temple,” Saidel explained.

He’s on a mission to recover all the lost secrets.

“The showbread is the iconic bread of the Beit HaMikdash. I’ve been studying for six years and still don’t know half of it.” There is an entire tractate in the Talmud, over a hundred pages long, that deals with breads in the Beit HaMikdash. “It’s an incredibly complicated bread, filled with lots of symbolism and life lessons,” he shared.

The bagel is often thought of as Jewish bread, but Saidel explained that the bagel was copied from a Christian bread prepared for Lent. Challah is also not originally a Jewish bread. “From all the breads in Jewish history, the only one that is Jewish is showbread. All the others were copied and not originally Jewish. The showbread is [historically] unprecedented. It  was a breathtaking bread.”

Saidel authored the forthcoming book The Jewish Bread Bible which covers the history of bread from the time of Adam and Eve to the present day. He expects it to be published before the end of 2020.

Why is any of this relevant now? Saidel explained that, “We are in the throes of Moshiach (messiah). We have to learn how they did things in the Temple to be ready [for the Third Temple].

“Bread is an excellent medium to teach people how they did the avodah (service) in the Beit HaMikdash,” he commented. In their live workshops, participants have the chance to mix and bake and smell the bread and the levonah (frankincense) associated with it.

“We don’t just bake. Everyone gets a workstation. As we’re doing each thing, I explain the reasoning and symbolism: why the salt has to be sea salt; why it was the shape it was; why the water was lukewarm. Nothing was random in the Beit HaMikdash. Everything was designed to evoke an emotion or spiritual thought,” he elaborated.

“When people do the workshop, they are transported back 2000 years. It’s a multi-sensory experience,” he said.

Since corona hit, the Saidels have temporarily gone back to baking and selling bread. But through Zoom sessions and their YouTube channel, teaching others about the secrets of the showbread continues.

As part of a series of Zoom sessions during the Three Weeks leading up to Tisha B’Av, Saidel is planning a free live simulation of shaping and baking the showbread on Sunday, July 26.