“They prepared a net for my feet to ensnare me; they dug a pit for me, but they fell into it. Selah.” 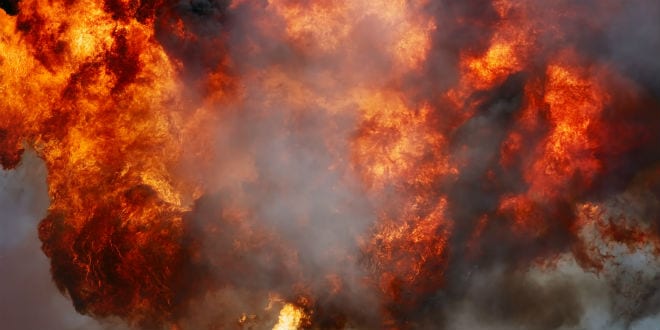 On Saturday, a gas explosion shook a residential building in Iran’s capital Tehran. A fire department spokesman told the semi-official ISNA news agency that several gas cylinders kept in a basement blew up, damaging the building and injuring a resident.

The official IRNA news agency reported on Sunday that a, fire broke out at a facility belonging to the Shahid Tondgooyan Petrochemical Company in southwest Iran. The fire was quickly contained and did not lead to any casualties or financial damage. An oil leak was reportedly the cause of the fire.

On Monday, Iranian media reported a fire broke out a fire in eight of the gas tanks at a gas condensate plant in the Kavian Fariman industrial zone in eastern Iran’s Razavi Khorasan Province, causing an explosion. According to Iranian media, property damage from the explosion was significant, but there were no casualties. Firefighters prevented the fire from causing further explosions, according to the Iranian Labour News Agency (ILNA).

The local fire chief told ILNA that the explosion caused extensive damage to the company and to a neighboring company but did not cause casualties.

, On Friday, a series of explosions in Tehran hit a missile facility/warehouse of the Islamic Revolutionary Guard Corps (IRGC). An analyst told The New York Times there were underground military installations in the area.

These were the most recent in a series of explosions that began on June 26 when a huge explosion rocked Parchin military and weapons development base about 20 miles southeast of the capital Tehran. Authorities initially claimed the explosion took place at a gas storage facility in a “public area” of Parchin rather than the military base. It was later revealed that the explosion was the result of a cyberattack, possibly carried out by Israel.

In July 2015, there were claims based on satellite imagery that there was activity in the Parchin military complex associated with nuclear weapons. UN and international inspectors were denied access to the site and Iran denied the claims saying the satellite photos were fabricated.

Four days later, an explosion from a gas leak in the Sina Athar Medical Center in northern Tehran killed 19 people. Video posted online appeared to show more than one explosion

Ten days ago, a fire broke out at a ground-level building at Iran’s underground Natanz facility which authorities said had caused significant damage. Natanz nuclear facility is generally recognized as Iran’s central facility for uranium enrichment with over 19,000 gas centrifuges currently operational and nearly half of them being fed with uranium hexafluoride. Between 2007–2010 Natanz nuclear power plant was hit by a sophisticated cyberattack that was carried out by German, French, British, American, Dutch and Israeli intelligence organizations. The attack used a Stuxnet worm which hampered the operation of the plant’s centrifuges and caused damage to them over time.

On Tuesday, two people were killed in an explosion at a factory in the south of Tehran.

In an interview on Russian Today television on Saturday,  former Iranian diplomat Amir Mousavi warned that Iran is prepared to retaliate against “the Zionist entity”, the US, and an Arab nation he claims participated in the attacks. He claimed the reaction could be a cyberattack or a military attack.