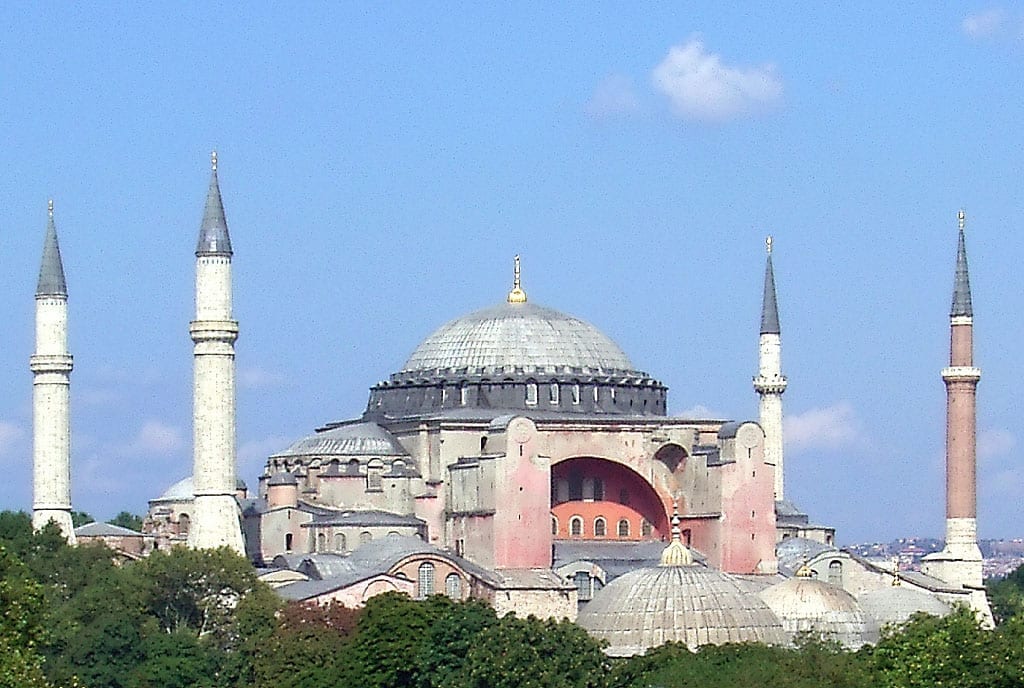 International backlash is growing over Turkey’s decision this week to allow what was once a landmark church to be converted into a mosque. While not as bloody (yet) as the purging of ancient Christian communities throughout the Middle East by ISIS and other Arab and Moslem extremists, Turkey is betting that it can get away with its eradication of Christians and any Christian presence in Turkey, and adjacent Iraq and Syria where its tentacles and fighter jets can reach.

Istanbul’s landmark Hagia Sophia was built as a Greek Orthodox cathedral 1500 years ago. It was converted from a church into a mosque after the Islamic conquest in 1453. In 1934, the secular Turkish government that succeeded the Islamist Ottomans made it into a museum which has been major tourist attraction. Now, following a Turkish court ruling that the conversion of the mosque into a museum 86 years ago was “illegal,” Turkey will convert it back to a mosque this month. Hagia Sophia is a world heritage landmark, open for people from all nations and faiths who have been able to appreciate the cathedral’s stunning beauty. Its conversion to a mosque is another nail in the coffin of the secularist Islam upon which Turkey was founded, and another pillar of growing Islamic intolerance marked by the 17-year reign of its current president, Recep Tayyip Erdogan.

For a variety of reasons, the least of which not being because they think they can get away with it, Turkey is competing for hegemony as being among the most extremist Islamic state. It’s time that the purging of Christians and erasing of Christian history that predates Islam needs to be stopped.

However, Turkish threats on Christians do not stop at the borders of Turkey. The threats of imposing its Islamic brand of hegemony is not limited to Christians, but against Israel and Jews as well. Christians and Jews must stand together to oppose this actively, not just because its moral but because we are in the same crosshairs.

The cartoon by iconic Israeli political commentator and creator of Dry Bones, Yaakov Kirschen, sums it up as well as the imperative for Jews and Christians to work together. However, if it wasn’t enough to take over a former church as a mosque and abandon any sense of Turkey being open to anyone other than Erdogan’s brand of extremist Islam, in the wake of this decision, the Turkish president declared according to the i24 website, “The resurrection of Hagia Sophia follows the express will of Muslims throughout the world. The resurrection of Hagia Sophia ignites the fire of hope in Muslim hearts and the hearts of all those oppressed, wronged, downtrodden and exploited.” The Turkish president’s official website also stated that the “resurrection” of Hagia Sophia paves the way for “the Liberation of the Al-Aqsa mosque,” meaning that he aspires to control the Temple Mount in Jerusalem.

Standing together against this wanton erasing of Christians and Christianity in the Middle East, Jews, Christians, and all people of conscience are signing this petition calling upon Turkey to reverse its decision.

The emboldening of Islamists is not felt exclusively in Turkey. The trickle down has vast consequences. Life for Christian Arabs in the Middle East is growing increasingly precarious. This includes within the Islamic and Arab nations, as well as in Israel where freedom of religion is guaranteed. However, emboldened Moslem Arabs have continued to chip away at the rights and existence of Christians and Christian institutions. Persecution is both physical and psychological. Many Christian Arabs have fled. Those who remain simply want to survive and live and worship peacefully as Christians.

And threats against Christian Arabs are also virtual.

This week, as Erdogan announced the “resurrection” of Hagia Sophia and set his eyes on Jerusalem, an Israeli Christian Arab group’s social media was targeted by Islamists for allegations of “incitement.” The “beauty” of leveling charges of incitement on social media is that it’s anonymous, and the more allegations of “incitement” from an army of Islamists, the greater likelihood that one will be blocked, if not taken down entirely. It’s intuitive that a growing number of Moslems, in and maybe outside Israel, targeted one particular group that offers social services for the growing number of Christian Arabs who seek to join the Israeli army and integrate as part of society.

Reality is that a growing number of Christian Arabs realize that their future is as loyal Israeli citizens. The IDF is a common denominator that brings together all elements of Israeli society, and these Christian Arabs want to be part of that for their own well-being. That’s the “incitement” of which they are accused. That’s what led Facebook not just to shut down the organization’s page, but even shut down its WhatsApp (owned by Facebook) account, virtually closing off communication to all members of the small group that’s persecuted by their Moslem neighbors. While the Hagia Sophia is a state decision and the petition circulating appeals to Turkey to change that, the persecution of Christian Arabs is local and could pass without as much as a peep. But there are brave Christian leaders standing up for themselves. They don’t need others to do the heavy lifting. They are willing to fight the good fight. But the growing persecution, and most recent shutting down of the Facebook and WhatsApp accounts, has made them feel all the more beleaguered. They need our help to feed those who can’t work, or are prevented from working, and to provide educational resources for the children of families where Christian Arabs join the army and are deemed “traitors.”

The precarious situation for Christian Arabs has only increased with the COVID pandemic. Poverty rates have spiked. Many families urgently need basic supplies as milk and diapers for their babies, diapers. Medical needs have increased and there’s no money for that or prescriptions. Some need clothes for their children, and basic food supplies which are requested daily on an increasing basis.

Please sign the petition and give what you can to help with basic needs so that Christian Arabs not only survive but thrive.