Fatah’s Role Model: 14-Year-Old Who Chose Death as a Martyr 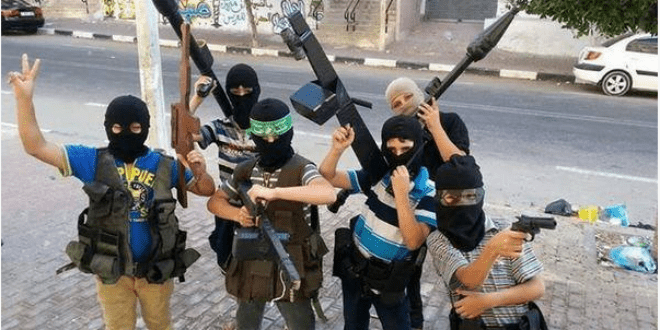 Still, after 20 years, a young Palestinian boy who sought and achieved death as a “Martyr” serves Fatah as a role model.

Already from the early beginning of the PA’s terror wave (2000-2005) – the second Intifada – the PA was actively encouraging Palestinian children to seek Martyrdom. One 14-year-old boy, Faris Ouda, deliberately entered into confrontations with Israeli soldiers with the goal of becoming a Martyr. Believing the PA’s brainwashing, Faris left his mother with the words: “Don’t worry, mother, Martyrdom is sweet.” [Official PA daily, Al-Hayat Al-Jadida, Feb. 3, 2001] Expecting and hoping to die as a Martyr, Faris had prepared a wreath in his room with his picture and the words “The brave Martyr Faris Ouda.” [Official PA daily, Al-Hayat Al-Jadida, Nov. 30. 2000] Palestinian Media Watch published its first report documenting the PA’s promotion of Martyrdom for children, already in November 2000, just two months after Arafat started the PA terror wave. Throughout the terror wave, the PA continued to teach children to “ask for death.”

As part of the recent attempts by the PA and Fatah to prompt the willingness of Palestinians to use violence and terror when the leadership wants it, a Fatah spokesman singled out Faris Ouda as a role model. Glorifying young Palestinians who sacrifice themselves and seek Martyrdom in the fight against Israel, Fatah official Osama Al-Qawsmi mentioned Faris as an example of “greatness” and threatened Israel that it should “remember well” the sight of “Faris Ouda standing opposite the tank.

The status of Faris Ouda as an admired “national hero” was reinforced for years after his death. PMW documented that a riddle for children on official PA TV included the clue: “A knight riding the Martyrdom horse.” A child answering correctly that this referred to Faris Ouda would win a $200 prize.

During the terror wave 2015/2016, a song appeared on Palestinian social media encouraging youth to engage in violence. It mentioned Faris Ouda and was also broadcast by Fatah.

Lyrics: “Go out against the treacherous enemy
Even if you hold [only] a rock in your hand
O you, who will never forget a blood revenge
O vigorous person, get up and strap on the belt of fire
And sound for us the voice of the attack
Go out against the enemy, go out, resist, hit, go out
Through rocks, Faris [Ouda] stood against the arsenal and defeated a tank…
Challenge the enemy
He who humiliates us will not live…
Hold your weapon and load it, leave the revolution burning…
O Fatah fire, burn, constantly and victoriously
Pour the fire of rage on the enemy…
Hand me the weapon and the equipment
Place thousands of cartridges on me
Our enemy will pay with his blood…
I marched determinedly through desert and forests
Holding a submachine gun in my hands which arises out of the rock”
Production – “Fatah Shabiba movement in Palestine”

When Fatah spokesman Al-Qawasmi recently mentioned Faris Ouda, he also glorified several arch-terrorists, including Abu Jihad who orchestrated attacks in which at least 125 Israelis were murdered; Abu Iyad who headed the terror organization Black September, and planned the murder of 11 Israeli athletes at the Munich Olympics in 1972; and Nazi ally Haj Amin Al-Husseini:

“This people – who some of its leaders were Haj Amin Al-Husseini, Abd Al-Qader Husseini, Yasser Arafat, ‘Abu Jihad’, ‘Abu Iyad’, and all the Martyrs of the Palestinian revolution. This is the land of Palestine.”

Faris Ouda – 14-year-old ‎Palestinian boy who was presented by Yasser Arafat as a role model for ‎Palestinian children because he sought and achieved death as a Martyr ‎in confrontations with Israel. According to the official PA daily, on Nov. 8, ‎‎2000, the day he was killed, before heading towards the areas where ‎Palestinian and Israelis were involved in fighting, Ouda left a wreath ‎around his picture in his room with the words: “The brave Martyr Faris ‎Ouda.” The PA daily wrote that Ouda had said to his ‎mother, “Don’t worry, mother, Martyrdom (Shahada) is sweet.” [PA TV, ‎Aug. 4, 2003]‎

Haj Amin Al-Husseini – the Grand Mufti of Jerusalem at the time of the British Mandate. During World War II he moved to Berlin, where he was a Nazi collaborator and an associate of Hitler. Al-Husseini was on Yugoslavia’s list of wanted war criminals, and was responsible for a Muslim SS division that murdered thousands of Serbs and Croats. When the Nazis offered to free some Jewish children, Al-Husseini fought against their release, and as a result, 5000 children were sent to the gas chambers.

Yasser Arafat – Founder of the PLO and Fatah, former chairman of the PA. During the 1960s, 70s and 80s Arafat was behind numerous terror attacks against Israelis. Although he received the Nobel Peace Prize in 1994 together with then Israeli Prime Minister Yitzhak Rabin and then Israeli Minister of Foreign Affairs Shimon Peres “for their efforts to create peace in the Middle East” after signing the Oslo Accords peace agreement, Arafat launched a 5-year terror campaign – the second Intifada (2000-2005) – in which more than 1,000 Israelis were murdered. Arafat died of an illness in 2004. However, following his death, the PA created the libel that Israel murdered Arafat, and it has been spreading it since. In 2012, samples were taken from Arafat’s remains and tested for poisoning by Swiss, Russian, and French teams of scientists. The Swiss team concluded that the tests were “coherent with a hypothesis of poisoning” – but a member of the team also stated that “our study did not permit us to demonstrate categorically the hypothesis of poisoning by polonium.” The Russian scientists concluded that “there was insufficient evidence to support the theory that Yasser Arafat died in 2004 by polonium poisoning.” [Reuters, Nov. 8, 2013] In March 2015, three French judges ruled that “it has not been demonstrated that Mr. Yasser Arafat was murdered by polonium-210 poisoning.” The French prosecutor stated that there was “not sufficient evidence of an intervention by a third party who could have attempted to take his life.” [France 24, Sept. 2, 2015] The French prosecutor also explained that the polonium and lead found in Arafat’s grave were “of an environmental nature.” [Jerusalem Post, March 17, 2015].Despite these results, the PA continues to blame Israel for Arafat’s death without any proof or backing for this claim.Links to the libel on PMW website:https://palwatch.org/database/10https://palwatch.org/page/12313https://palwatch.org/page/5505