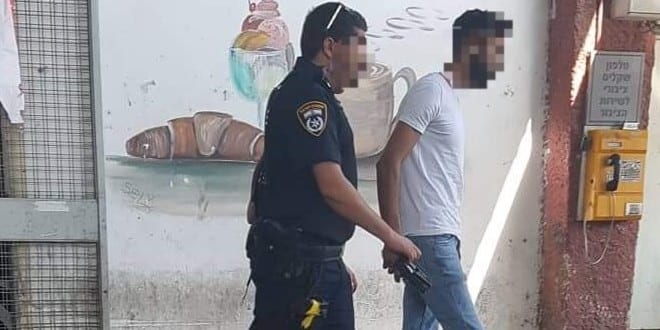 “The doctrine of military activity, armed struggle, and a lengthy people’s war constituted an important means for Fatah”

The PA and Fatah continue to tell Palestinians that the source of their pride is the terror they have committed for decades against Israel. In an episode of the five-minute documentary program Lexicon of the Revolution, PA TV emphasized “the armed struggle,” highlighting Fatah’s nature as a terror organization:

Official PA TV narrator: “[Fatah’s] military activity was expressed through operations (i.e., terror attacks) and armed struggle… in the first Intifada…  [and] the second Intifada (i.e., long terror waves murdering 1,300 Israelis). The doctrine of military activity, armed struggle, and a lengthy people’s war constituted an important means for Fatah to mobilize the capabilities of the public and the Palestinian people.”

Palestinian Media Watch has exposed numerous times that this is what Abbas’ institutions repeatedly choose to highlight and remind their people.

Recently, Fatah Revolutionary Council member Muhammad Al-Laham reiterated that Fatah is prepared to use “armed struggle” against Israel. He even took pride in the fact that Palestinians “are always creative when it comes to finding effective tools to hurt the occupation.” The preparedness to engage in terror was also emphasized by other officials who claimed the PA is allowed to do so under international law.

Fatah Revolutionary Council member Muhammad Al-Laham: “Our message to the occupation and the world: We’ll fight to defend every grain of soil with all possible means… We’re not fleeing from any form of struggle! We’ve had situations even of armed struggle… All possible forms. We must discuss [it], and let’s not limit our creativity. Our people are always creative when it comes to finding effective tools to hurt the occupation… The Fatah Movement is the backbone of the Palestinian revolution…  Fatah still exists in the sphere of struggle in all its forms.”

The following is a longer excerpt of the TV program:

Narrator and text on screen: “The sense of revolution in the Fatah Movement has expressed the independent will and the ability to manage contacts and rejuvenate that has characterized its steps. [Fatah’s] military activity was expressed through operations (i.e., terror attacks) and armed struggle, through initiatives and under the auspices of the general leadership of the Al-Asifa forces, the Al-Qastal forces, and the Al-Karameh forces (see note below –Ed.), on to the Fatah Hawks and the Black Panther in the first Intifada (i.e., Palestinian wave of violence and terror against Israel, approximately 200 Israelis murdered, 1987-1993); and the Al-Aqsa Martyrs’ Brigades (i.e., Fatah’s military wing) and their various compositions in the second Intifada (i.e., PA terror campaign 2000-2005, more than 1,100 Israelis murdered). The doctrine of military activity, armed struggle, and a lengthy people’s war constituted an important means for Fatah to mobilize the capabilities of the public and the Palestinian people – and this is in order to emphasize its identity, realize its unity, and achieve its independence – alongside political, organizational, social, and media activity. This matter was connected to Fatah not only since the Intilaqa (i.e., “the Launch” of Fatah, counted from its first terror attack against Israel) in 1965, but rather since the establishment in 1958.”

The Karameh battle, or Al-Karameh – On March 21, 1968, Israeli army forces attacked the town of Karameh in Jordan, where Fatah terrorists had been launching attacks on Israel. Although Israel prevailed militarily, Arafat used the event for propaganda purposes, declaring the battle a great victory that erased the disgrace of the 1967 Six Day War defeat.

Intilaqa – “the Launch” refers to the beginning of Fatah on Jan. 1, 1965, when it carried out its first terror attack against Israel, attempting to blow up Israel’s National Water Carrier.