Yet Another Explosion at Iranian Nuclear Site

Home » Yet Another Explosion at Iranian Nuclear Site 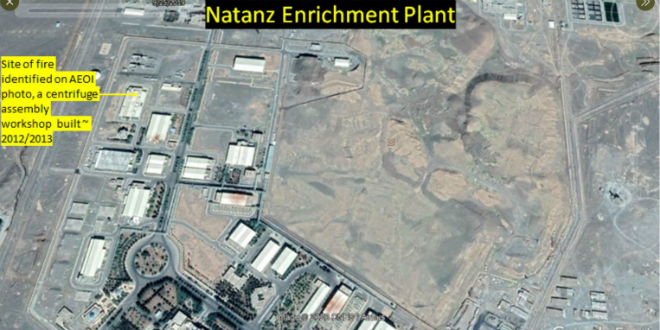 A fire and explosion damaged a centrifuge production plant above Iran’s Natanz nuclear enrichment facility at around 2:00 AM local time on Thursday.

Iranian media released images of a fire-damaged a two-story brick building with a destroyed roof. Debris on the ground and a door apparently blown off its hinges indicate an explosion. A US National Oceanic and Atmospheric Administration satellite detected the incident.

The site of the fire at the Natanz Enrichment Plant identified in an AEOI photo is the same building the Institute identified as centrifuge assembly workshop in 2017. See: https://t.co/8WPao3i3F5 pic.twitter.com/aw9q0vqTqo

Behrouz Kamalvandi, a spokesman for the Atomic Energy Organization of Iran, denied that the damage was significant, claiming it took place at an under-construction “industrial shed.”

Despite his claims,  Iran’s state-run IRNA news agency published a commentary addressing the possibility of the “industrial shed” being the target of sabotage by enemy nations such as Israel and the US. The Iranian media also blamed foreign enemies for other recent explosions in the country.

“There are physical and financial damages and we are investigating to assess,” Kamalvandi told Iranian state television. “Furthermore, there has been no interruption in the work of the enrichment site. Thank God, the site is continuing its work as before.”

Last week, a large explosion was reported in the Parchin military base that has been associated with nuclear weapons. Unconfirmed reports have claimed the explosion was the result of an Israeli cyberattack.

Natanz nuclear facility is generally recognized as Iran’s central facility for uranium enrichment with over 19,000 gas centrifuges currently operational and nearly half of them being fed with uranium hexafluoride. Between 2007–2010 Natanz nuclear power plant was hit by a sophisticated cyberattack that was carried out by German, French, British, American, Dutch and Israeli intelligence organizations. The attack used a Stuxnet worm which hampered the operation of the plant’s centrifuges and caused damage to them over time.