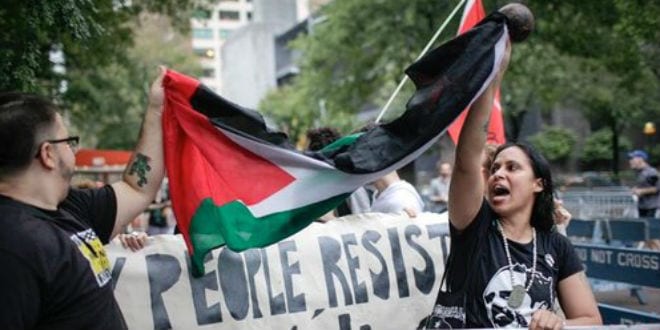 Anti-Israel groups are planning on holding Day of Rage protests all cross America on Wednesday to protest a vote in the Knesset on annexing Judea and Samaria as per Trump’s  peace plan, officially titled Peace to Prosperity: A Vision to Improve the Lives of the Palestinian and Israeli People.

The vote comes as a result of a coalition deal between Netanyahu, head of the Likud Party, and his political opponent, Benny Gantz, head of the Blue and White Party. As per the agreement, the government can pursue annexation of 132 Jewish cities and towns and the Jordan Valley. This represents 30 % of the West Bank allocated to Israel under the Trump administration’s peace plan. The plan also conditionally provides for a Palestinian state on the remaining 70% of the territory.

The demonstrations set to take place in Chicago, San Diego, Brooklyn, Los Angeles, and San Francisco, as well as in Toronto, Madrid, and Valencia were organized by many groups including Students for Justice in Palestine, Jewish Voice for Peace, and American Muslims for Palestine.

Samidoun Palestinian Prisoner Solidarity Network, another organizer of the event, linked the Day of Rage event with the protests and riots that took place in the wake of the horrific murder of George Floyd. The announcement on their website called for “a day of rage, while building its solidarity with the Black uprising against racism and repression in the United States.”

It should be noted that the Black Lives Matter movernent has been heavily criticized for a recent string of anti-Israel tweets.

Educate yourselves. You cannot fight prejudice with prejudice. pic.twitter.com/Sumxe9O7GX

Samidoun was shut out of Paypal in 2019 for alleged ties to the Popular Front for the Liberation of Palestine (PFLP) a violent terrorist organization. Khaled Barakat, the coordinator of Samidoun, is the head of the PFLP’s Foreign Operations Department. In April 2018, Fatah (PLO) referred to Barakat as a “member in the central committee of the PFLP.”

JPost reported that another organizing group, Al-Awda – The Palestinian Right to Return Coalition, accused Israel of “72 years of genocide, ethnic cleansing, and dispossession.”

It should be noted that according to Ottoman statistics, in 194, the region had a  population of 657,000 Muslim Arabs, 81,000 Christian Arabs, and 59,000 Jews. As of 2014, Israeli and Palestinian statistics for the overall numbers of Arabs in the area west of the Jordan, inclusive of Israel and the Palestinian territories estimate 6.08 million Palestinians for that area. This would categorically refute any claims of a genocide targeting Palestinians. In addition, Israel is a fully integrated pluralistic society. The regions under the rule of the Palestinian Authority and Gaza are ethnically cleansed of Jews and inhospitable to Christians.

Zachor Legal Institute, a legal advocacy organization, wrote a letter to LA Mayor Eric Garcetti and Police Chief Michael Moore to warn against the demonstration planned to take place outside the Israeli consulate on Wednesday.

“While we fully support every American’s right to peacefully assemble and protest, there is every reason to believe that the planned July 1 ‘Day of Rage’ will be a day of violence and antisemitism, commensurate with… the word ‘rage,'” the letter reads.